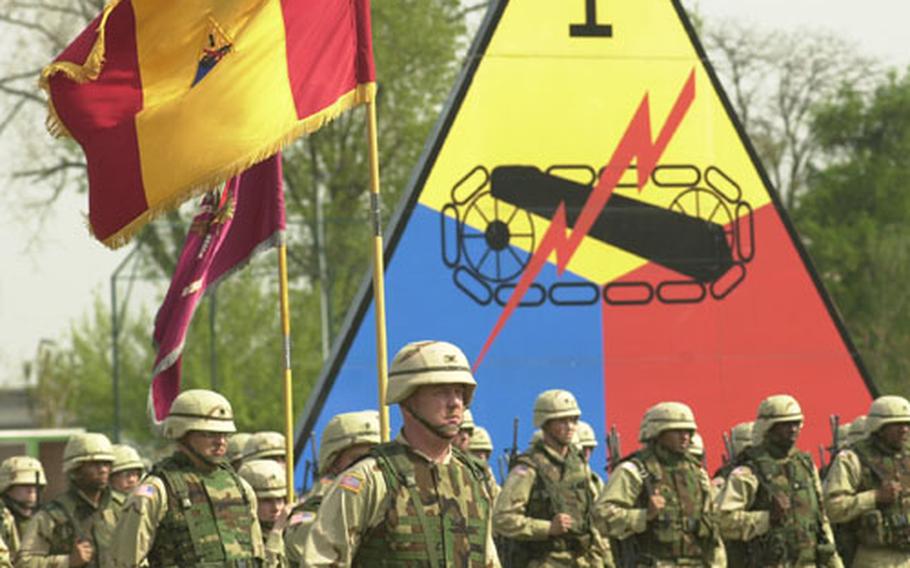 Most of the 1st Armored Division left last week for Iraq. The question now is, will they return to Germany, or will the go from Iraq to bases in the U.S. as the Pentagon transforms its base structure in Europe? (Terry Boyd / S&S)

Soldiers from the 1st Armored Division, now on their way to Iraq, may find themselves returning to their home bases in Germany only to pack up and move.

Instead of shifting to a new war zone, however, this move could be a wholesale relocation back to the United States as part of a worldwide restructuring of U.S. forces. While the plan has not yet been approved, it is now under consideration at the highest levels of the Pentagon, according to several top military officials.

Speculation about the potential move was circulating among 1st AD families even before their soldiers deployed to Iraq.

The rumor that Kristy Craft faces is that her husband&#8217;s unit, headquarters company for the division&#8217;s 2nd Brigade, will move to Fort Lewis, Wash., after it finishes its Iraq deployment, she said. Word has it, she said, that other units in the brigade, such as the 1st Battalion, 35th Armor Regiment, will shift to Fort Hood, Texas.

Media reports both in Europe and in the States have stated flatly that the 1st AD will not even return to Germany, instead redeploying directly back to the States.

The commander of U.S. forces in Europe, Jones confirmed in a meeting with reporters on April 23 in Washington, D.C., that while moving the 1st AD from Iraq directly back to the States is an option being discussed, he also hoped that &#8220;we&#8217;ll carry the day and that we won&#8217;t do that.&#8221;

In a recent interview with Stars and Stripes, Jones said that whatever specific decisions are made regarding moving forces around or out of Europe, officials will build in plenty of forewarning for families.

Not only are new facilities needed to receive the 1st AD units, but it also will take time for soldiers to clear out of their existing bases in Europe, military officials say.

Meanwhile, Jones promised for those troops remaining in Europe &#8220;their quality of life is going to be better.&#8221;

The 1st AD move is just one part in a massive reorganization of Jones&#8217; entire command.

While part of the plan does see some forces returning to the States, others will likely shift to the south and east. Jones wants to retain some major bases in Central Europe, such as the sprawling logistics hub at Ramstein Air Base, while opening smaller bases in places such as Bulgaria and Romania.

&#8220;Part of the decision process is strategic, but we want to be in places where we can continue to train unimpeded by environmental regulations and politics, places that obviously want us to be there,&#8221; Air Force Gen. Charles Wald, EUCOM deputy commander, said last week at a news conference at Incirlik Air Base in Turkey.

Army Public Affairs officials both in Europe and at the Pentagon declined to comment on reports that the division could move. U.S. Army Europe officials referred all questions to EUCOM. Jones&#8217; spokesman, Navy Cmdr. James Graybeal, said the effort is &#8220;a plan in its infancy.&#8221;

&#8220;Because the plan is a work in progress, it would be pure speculation to try and forecast how it will or will not affect any individual unit or facility,&#8221; Graybeal said.

Meanwhile, back at the division headquarters in Wiesbaden, the division spokesman said that nothing official has been released yet.

&#8220;We have received no orders, instructions or information at this time stating we won&#8217;t be returning to our home bases in Germany,&#8221; said Maj. Scott Slaten, public affairs officer at 1st A.D. headquarters in Wiesbaden.

If and when the move occurs, the one thing that is clear right now is that will be every bit as logistically intensive as the deployment to Iraq, perhaps more so. In addition to combat gear and equipment that must be contended with, battalions of families would be on the move this time.

At Baumholder alone, the move would mean moving household goods and cars for 5,000 soldiers and 7,000 family members. And Baumholder is but one of 11 1st AD troop hubs spread across western Germany and home to another about 8,500 soldiers.

With little information from Army leaders on any pending plans, soldiers, spouses and Defense Department civilians must wait and parse the truth of out of the continuing rumor mill.

Life has been &#8220;very stressful&#8221; since word of possible changes first swept Baumholder weeks ago, said German teacher Debbie Faerber. &#8220;I don&#8217;t know how I should plan my life. If I should stay here, or think about going back. Should I build the house I want to build? Have children?

Without her salary, life would change dramatically for her and her German husband, Sascha, Faerber said. She&#8217;s hoping that a 2002 announcement that a Stryker Brigade will becoming to Baumholder, switching out with the 2nd Brigade, turns out to be true, she said. That could save her job. But Faerber added that she&#8217;s somewhat resigned to the fact her life may change dramatically, and not for the better.