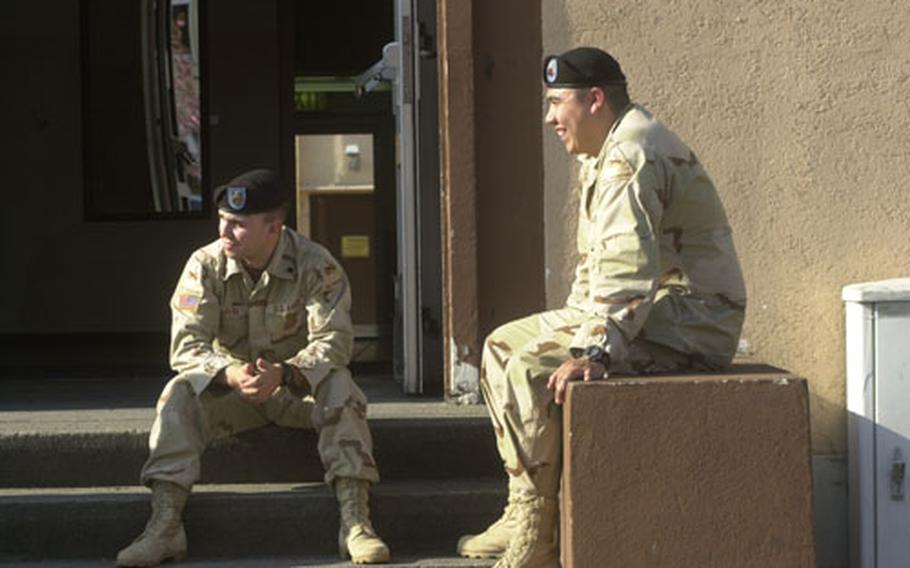 Sgt. Abdul M. Sughayar (left) and Spc. David Miller (right), both with the 1498 Transportation Company, a National Guard unit from Riverside, Calif., drain the antifreeze from a wrecked M1070 Heavy Equipment Transporter at Camp Victory, Kuwait. The soldiers are mechanics with the unit and are repairing the front end of the truck, which was involved in an accident while performing a mission hauling armor from Iraq to Kuwait. (Courtesy of U.S. Army)

Like most busy airports, the passenger deployment/redeployment area at Ali Al Salem Air Base in Kuwait &#8212; a major transit point for troops heading to and from Iraq &#8212; gets its share of lost items.

So Air Force security forces thought little of it when someone found a plastic grocery bag full of envelopes in a parking lot there and turned it in at a guard post one day last month.

The bag contained no clues to its ownership. The money had been divided among the envelopes in odd amounts like $3,275.43, according to an officer familiar with the case. Each had the total precisely written on the cover.

Military police at nearby Camp Arifjan took custody of the cash and started searching for the owner.

It didn&#8217;t. Within a few days, the MPs had traced the missing money to the Army&#8217;s Postal Finance Center at Bagram air base in Afghanistan.

The lieutenant was not happy. Somebody had just fired a rocket at the Sheraton Hotel in Baghdad, taking out a room on the 12th floor.

The rocket had been fired at about 7:15 p.m. from behind a group of four apartment buildings fronting Sadoun Street. No one was injured.

Soldiers from the 1st Armored Division and Iraqi security swarmed the area but ended up with only a partial license plate number ... and another rocket, which was attached to a battery and was ready to go.

The lieutenant took a wad of tobacco from a tin, then sent a stream of juice into the ground.

An Iraqi sent out to cut the wires to the battery on the rocket returned to where the lieutenant was standing. He was sweating, from fear, or the heat, or running, or all of it. He hadn&#8217;t cut the wires, he said, because he was afraid to.

&#8220;If you cut them all at the same time, nothing happens,&#8221; a private first class said encouragingly.

The lieutenant spat out another stream of tobacco juice.

After a few minutes, an Iraqi explosives crew had removed the missile. But the lieutenant was still not happy.

He knew no answer would be good enough.

Limp Bizkit&#8217;s remake of The Who anthem &#8220;Behind Blue Eyes&#8221; filters down from an open barracks window in Wiesbaden, Germany, as 1st Armored Division soldiers Spc. Robert Garvin and Sgt. Jaime Galvan sit in their desert uniforms waiting to go back to Iraq.

The smell of green grass and blooming flowers mixes with the warm German sunshine as the two sit on the front stairs. Galvan says he feels chilly.

Part of the division headquarters, the soldiers were members of a small advance team to help prepare the way for returning units at Wiesbaden Army Airfield. Now those units aren&#8217;t coming home any time soon, and Garvin and Galvan are stuck in limbo.

Meanwhile, packers have already come and put all their personal stuff &#8212; clothes, stereos, posters, TVs, and all the small comforts that turn a barracks room into what passes for a single soldier&#8217;s home &#8212; back into storage.

The two soldiers seem in sync with the mood of the music &#8212; a kind of reserved, melancholy anger. But, as it turns out, not for what might be the obvious reasons.

They&#8217;re both eager to get back downrange. Watching the carnage from Iraq, now on the news instead of firsthand, they&#8217;re unhappy with the delays that are keeping them from their units. The hang ups leave them feeling out of place.

So, not even gone yet, they&#8217;re already living out of their rucksacks again. But that somehow gives them some small satisfaction.