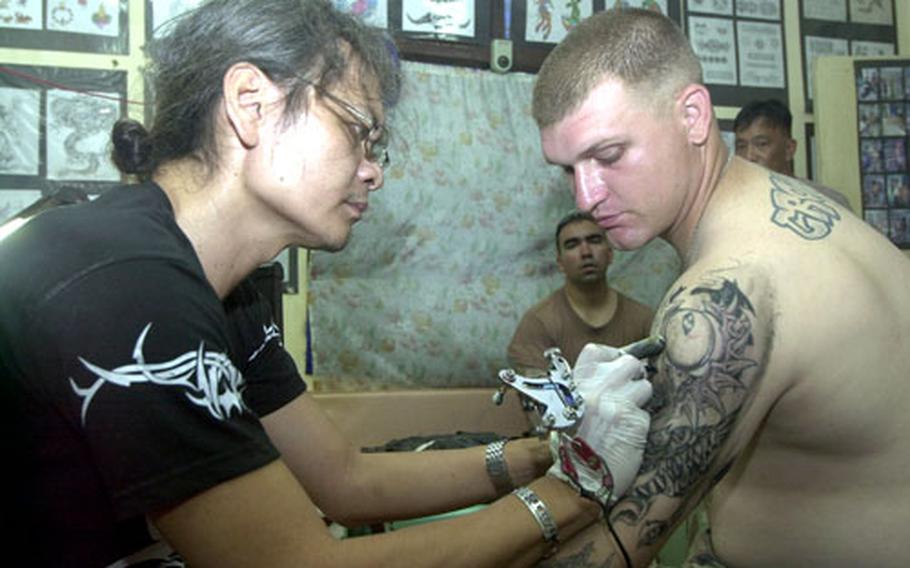 In my defense, I really didn&#8217;t think I had slammed the door of the squat one-story building that houses the Joint Special Operations Task Force-Philippines troops who had been there for months.

But upon return to the building, I read the slightly faded sheet of paper taped inside the door.

According to the step-by-step directions, one must leave one&#8217;s hand on the doorknob through the entire process or one has committed the unpardonable crime of slamming a door in a barracks full of different folks working all different shifts.

By the third or fourth day, I realized how important that rule was. Though I was a guest, I felt like leaping out of my rack at 5:30 a.m. when someone slammed the door, which shook the plywood sheets separating the sleeping areas.

Movie night with popcornSlowly making my way across the pitch-black camp on a Saturday night, I could see the faint glow of what looked like some sort of PowerPoint presentation being conducted on an open-air patio.

I approached &#8212; hoping to catch the tail-end of a convoy preparation briefing or a run-down of the next day&#8217;s air operations &#8212; but was stopped by the sounds of children laughing and the smell of heavily buttered microwave popcorn.

I had found &#8220;movie night,&#8221; in which Special Forces soldiers invite local kids to come in the wire and watch an animated movie projected on the whitewashed wall of the officer housing while enjoying snacks.

The soldiers said it&#8217;s a good chance to interact with the people among whom they live and that the kids start milling about near the gate hours before the 8 p.m. start time.

Since many of the soldiers are National Guardsmen who left family behind to volunteer for the mission, I think most of them were enjoying the time around the kids as much as the kids enjoyed the talking cows and pigs in the movie.

The most comfortable spotBy far, the most comfortable building on the operating base is the &#8220;dining facility.&#8221; It&#8217;s big enough to allow a few dozen troops to eat at any given time, and it&#8217;s air conditioned &#8212; making for a nice break during the times when the heat index is above the daily 100 degrees.

The troops have contracted to have some local residents buy and cook their food for them, which is an interesting mix of U.S. favorites &#8212; like pancakes and bacon for breakfast &#8212; with a serious dose of local fare, including wonderfully seasoned beef and pork dishes.

The breakfast and supper menus are served hot. Lunch is a collection of leftovers and freshly-made egg salad and tuna salad.

A big fridge in the corner is stocked with bottled water, with one simple rule: If you&#8217;re going to take one out, replace it with a hot one from the boxes stacked nearby.

While different compounds have different rules and curfews for their troops, both the headquarters on Mindanao and the advance operating base on Jolo allow their troops to visit tattoo parlors on the Philippine military bases.

And the troops are taking full advantage: dozens are walking around their camps with freshly inked tats.

The tough part is getting an appointment, soldiers say.

At the parlor in Jolo, Sgt. Clifton Crowder was getting a huge tattoo on his arm while another soldier in his unit, Pfc. Paul Gennaro, waited.

Both said the prices are about half of what they&#8217;re used to paying in Hawaii.

Gennaro rolled up his sleeve to display the outline of full tribal &#8220;sleeve&#8221; running from his soldier to his wrist.