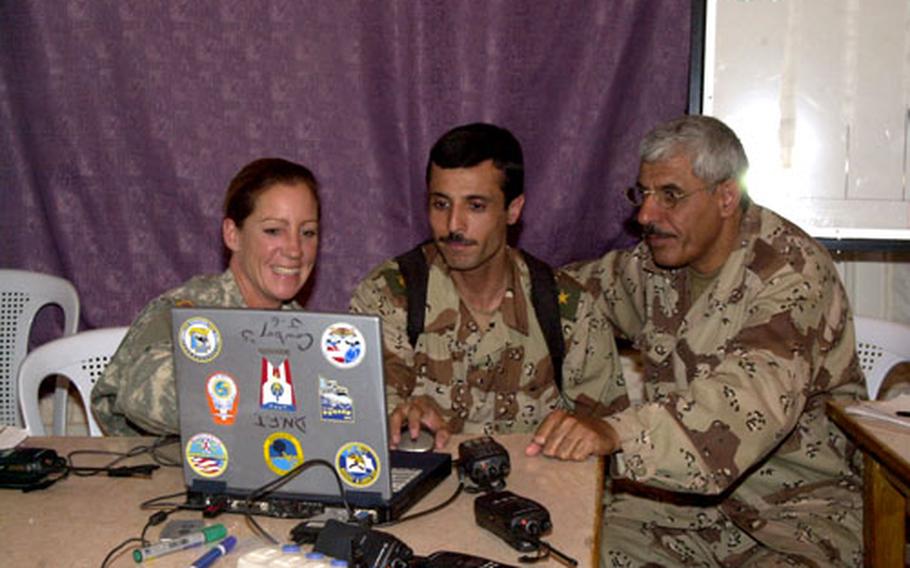 TIKRIT, Iraq &#8212; While hoping for the best, Iraqi and American officials prepared for mayhem this past week during a communications exercise simulating security responses for the Oct. 15 constitutional referendum.

Elections officials transported ballots in the midst of riots, soldiers came down with food poisoning and fires raged throughout cities during the three-day exercise, which ended Wednesday at the Provincial Joint Communications Center.

The exercise simulated events to occur from Oct. 14-16. It included Iraqi and American soldiers in one room, and Iraqi elections officials and emergency operators in another room.

Simulated emergency calls came from local Joint Communication Centers, which are similar to 911 call centers but may also include space for soldiers, emergency workers and government officials.

The local centers then relayed the information to the provincial center. Iraqi police guarding the polling stations have been designated as first responders, while the Iraqi army acted as an outer security cordon.

For example, when simultaneous riots broke out in Samarra, Tikrit and Beiji during the exercise, the Iraqi army joined the police. Coalition forces have been designated as the last line of defense and will provide security if requested. They also will provide medical evacuations.

Point and clickSgt. 1st Class Sheldon Gray pointed to a computer screen projection filled with radio communications data and quizzed his new class at the former Forward Operating Base Dagger.

Teaching an English-language software program to Iraqi soldiers was a first for both Gray, 37, of Elkins Park, Pa., and Sgt. 1st Class Janet Baldridge, 41, of Bel Air, Md.

By questioning the soldiers, Gray said he found a few who probably understood well enough to attend signal school. The new school in development includes a 24-day course on various aspects of communications.

Baldridge worked with some of the soldiers who had difficulty grasping the concepts of the new software. She said she could see the soldiers&#8217; excitement as the lesson became clearer.

&#8220;To know you&#8217;ve had an impact on even one student is what teaching is all about,&#8221; said Baldridge, who has spent eight years teaching Army drill instructors.

As for what soldiers from the all-male Iraqi army thought about being taught by a female soldier, none showed any sign of surprise.

&#8220;It&#8217;s very ordinary for me,&#8221; said Ibrahim Sultan, an Iraqi sergeant major-equivalent who said he was grateful for the learning opportunity.

Vegas Iraq-style?Driving in an up-armored Humvee back to the 42nd Infantry Division&#8217;s headquarters, located at the highest point on Forward Operating Base Danger, soldiers stared over the ridge at the sandstone buildings and the Tigris River. During the day they look dreary and baked; but shortly after sunrise, they gleam with the cloudless sky&#8217;s hazy pink light.

What? Wayne Newton? The German guys with the white lions?