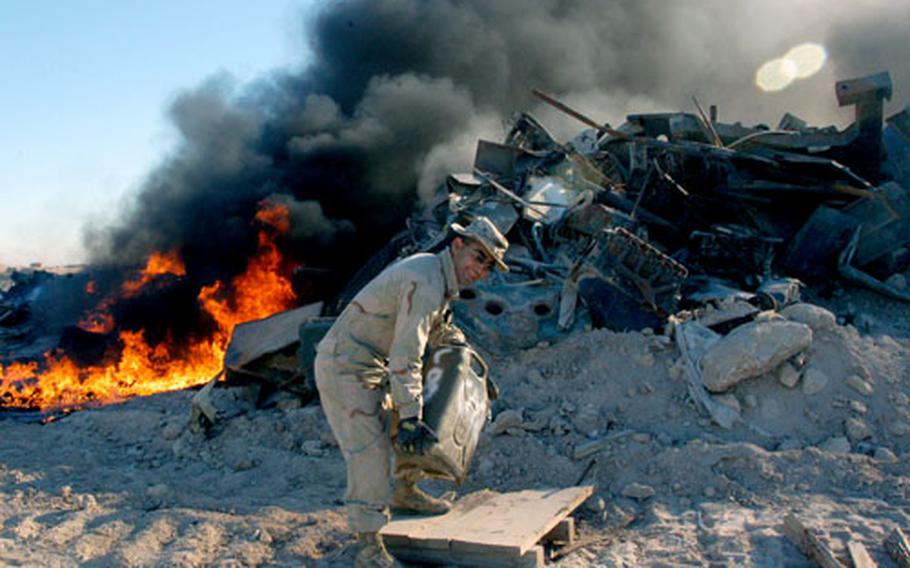 Sgt. Jesus Zuniga, of the 1st Marines Logistics Group, gets ready to add a little airplane fuel to the fire on Friday during the burning of junk at Camp Taqaddum, Iraq. (Charlie Coon / S&S)

Sgt. Jesus Zuniga, of the 1st Marines Logistics Group, gets ready to add a little airplane fuel to the fire on Friday during the burning of junk at Camp Taqaddum, Iraq. (Charlie Coon / S&S) 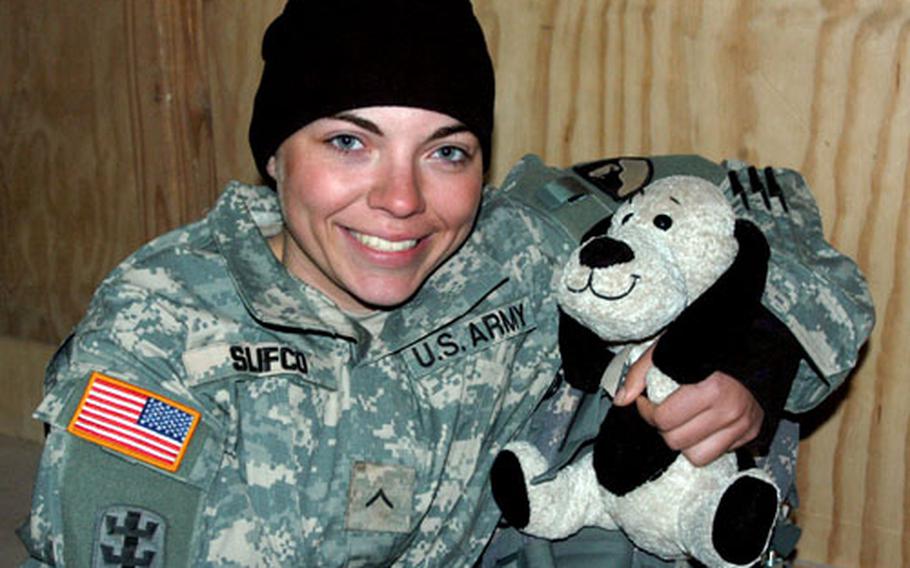 CAMP TAQADDUM, Iraq &#8212; Many of the faces in the crowd on Monday at one of Camp Taqaddum&#8217;s air terminals were of troops hoping to get home for Thanksgiving.

Goss, who has been in Iraq since January, said he was the last soldier from his Friedberg, Germany-based unit, to take his two weeks of rest and recuperation. He said he most looks forward to seeing his niece, Isabelle, who&#8217;s just starting to talk.

Spc. Randy Wethington, of 1st Battalion, 77th Armor, of the Schweinfurt, Germany-based 1st Infantry Division, was headed for Lafayette, Ind. Wethington, 30, had been in Iraq for less than two months before taking his R&R. He&#8217;d already served a one-year tour with 1st ID back in 2004 to 2005.

Wethington said he was most looking forward to seeing his fiancee, Annette, and her twins, a 3-year-old boy and girl.

Both soldiers figured they&#8217;d have to make five different flights, plus layovers, to get from their bases at Camp Ramadi to their families in the States.

At the base hospital, Roncone assists doctors by stabilizing broken facial bones or clamping a bleeding artery, so the wounded can be flown to a higher-level hospital in Baghdad or Balad.

His little clinic is a few hundred yards away. There, Roncone and a staff of two won&#8217;t clean teeth, but they&#8217;ll pull them. Or fill them if a filling comes out. Or do a root canal.

&#8220;Hopefully something that will last through their deployment,&#8221; said Petty Officer 1st Class Chris Meade, a dental technician.

They do the same for Iraqi soldiers and police who are stationed nearby. But there&#8217;s a two-week waiting list at his clinic.

Where there&#8217;s smokeThat giant billowing of black smoke seen Saturday on the other side of the base wasn&#8217;t anything to worry about &#8212; just 20 or 30 tons of stuff that needed to be burned.

Metal, rubbish, some rubber. A lot of it was wrecked vehicles, old fuel canisters, leftover Humvee parts. Three years&#8217; worth of refuse that had been laying around. Airplane fuel was used to start it. The blaze was timed so that the prevailing wind wouldn&#8217;t carry the smoke across the flight line.

Camp Taqaddum is a large base, about 14 miles around. Except for the people and the buildings, which are fairly spread out, it&#8217;s all dirt. The closest buildings were several hundred yards away. The main threat was if a flaming piece of cardboard or other ember somehow got airborne.

Yates wouldn&#8217;t say if the gigantic fire turned him on in a pyromaniac sort of way.