Sgt. Carlos Bracero of the Landstuhl, Germany-based 236th Medical Company lives up to the motto “Mission First” as he averts his gaze from the Bulgarian dancer during a party Sunday at Bezmer air base. (Charlie Coon / S&S)

Sgt. Carlos Bracero of the Landstuhl, Germany-based 236th Medical Company lives up to the motto “Mission First” as he averts his gaze from the Bulgarian dancer during a party Sunday at Bezmer air base. (Charlie Coon / S&S) 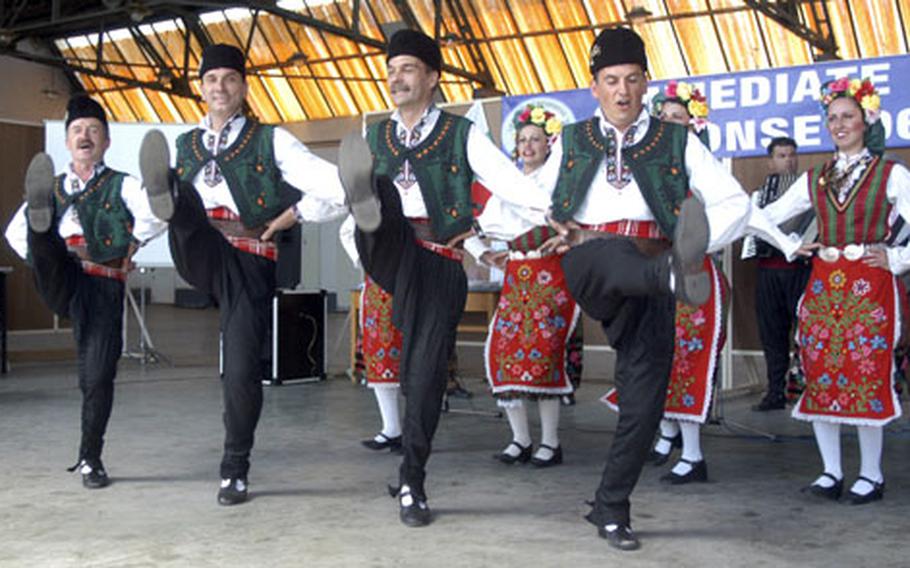 Bulgarian dancers kick up their heels during a performance Sunday afternoon at Bezmer air base, Bulgaria. The group was performing at a party to celebrate the conclusion of the exercise Immediate Response 2006 between U.S., Bulgarian and Romanian troops. (Charlie Coon / S&S)

After nearly two weeks of travel, training and exercises in 90-degree heat, the soldiers from Immediate Response 2006 cut loose on Sunday. Since one of the goals of the exercise was to make friends, a party with the U.S., Bulgarian and Romanian soldiers seemed to fit.

The cooks at the Novo Selo Training Area and the nearby Bezmer air base prepared a barbecue of steaks, burgers and ribs. Bulgarian musicians and dancers entertained. DJs played music.

At Novo Selo, where the party started later and ended later, troops from all three nations partied into the night. Bulgarian civilians &#8212; interpreters, cleaning women, cooks &#8212; who were hired to work during the exercise joined the festivities.

Staff Sgt. Stephen Garansi might have been the most loved guy. He was handing out the beer tickets, and the line was long.

Soldiers hadn&#8217;t had a chance to drink alcohol since arriving in early June. After working and training every day for nearly two weeks, many were ready for a cold one. Or three. Troops and workers were given tickets that were good for three half-liter cans of Zagerka. Alcohol by volume: 5.0 percent.

Not everyone was drinking, though.

Helos train, tooWhile most troops for the exercise were based at Novo Selo, 143 others were working out of the air base at Bezmer.

The 15 helicopters that flew out of Bezmer logged more than 400 hours during the exercise, according to Sgt. 1st Class Terri Clavon of the Landstuhl, Germany-based 236th Medical Company.

Among the missions: medical evacuation training with Bulgarian pilots and crews, quick-reaction support for ground troops and an air-assault mission into Romania.

In addition to the 236th and the 601st, the Bezmer-based units included the Katterbach-based 3rd Battalion, 158th Aviation Regiment, the Mannheim, Germany-based 44th Signal Battalion, and 7th Army Reserve Command.

That&#8217;s slang for someone who flies a helicopter into a potentially dangerous landing zone, then takes off after the dead and wounded are loaded on board. Medevac is the commonly used term.

It&#8217;s a risky job, not just for the pilots but for the medics who get off of the chopper with nothing but a 9 mm pistol on their hip to retrieve their brothers and sisters in arms. Sometimes they must dodge bullets or run between burning vehicles to do it.

Murphy, of the Landstuhl, Germany-based 236th Medical Company, was with the 45th Medical (Unit) during a one-year deployment to Iraq.

It&#8217;s a shame, Murphy said, that there&#8217;s not a medal to validate the feats of dust-offs and their mates. No Combat Infantry Badge, no Combat Action Badge.

There&#8217;s a bill before Congress to establish a Combat Medical Aviation Badge, and he hoped people in high and low places help persuade their elected officials to push it through.

If passed, Murphy said, the badge would be awarded retroactively to pilots and medics from the Vietnam War.