Reporter's Notebook: Taking a break to vote in Qalat 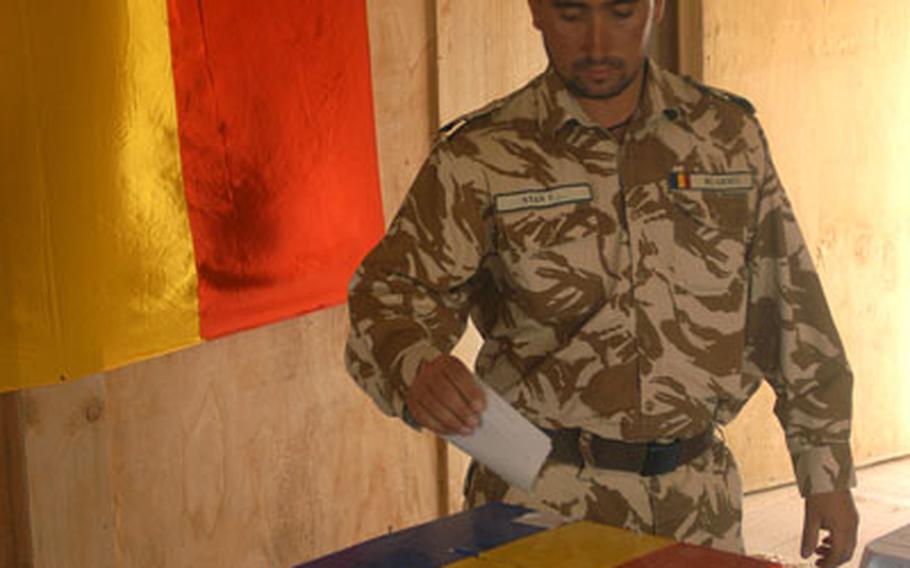 On May 19, Romanians went to the polls to decide whether to dump their president, Traian Basascu, and call for new elections. Like deployed U.S. servicemembers, members of the Romanian military had the opportunity to vote absentee. (Kevin Dougherty / S&S)

Last weekend, about 900 Romanian military personnel serving in Afghanistan had the opportunity to cast an absentee ballot regarding the future of their president.

Turnout was high in the city of Qalat, where about 400 Romanian soldiers are based at Camp Lagman. By late afternoon, with still a few hours left to vote, 379 people had already dropped their paper ballot into a wooden box at the makeshift polling station.

Romanian president Traian Basascu was suspended earlier this year, and the May 19th ballot question asked voters whether he should be removed from office permanently. A &#8220;no&#8221; vote signaled a desire to keep Basascu in office.

Sgt. Major Florin Coti didn&#8217;t indicate how he voted, but he spoke highly of Basascu, who is in the middle of a four-year term.

Hazardous dutyDuring a recent nighttime artillery barrage in northern Kunar province, a soldier returning to his hooch at Camp Blessing stopped to observe flames on a nearby hillside.

As he walked away, he stopped to take another look. The fire, of course, was caused by an artillery shell fired by an American battery.

Credit where it&#8217;s dueIn its official news release on the killing of Habib Jan, the militant leader who died in northeastern Afghanistan last month after a daylong firefight, the U.S. military made it seem as if Afghan forces carried the day.

And while they were active, it&#8217;s clear from conversations with several U.S. soldiers who were in the fight that the Afghans were largely in a supporting role, when you take the engagement in its totality.

The Afghan National Army soldiers needed &#8220;a little bit of prodding, but they did a pretty good job,&#8221; said Staff Sgt. Chris Bryant, a 10th Mountain Division soldier involved in the intense gunbattle.

Bryant was one of about two dozen U.S. soldiers involved in the initial contact with Habib Jan&#8217;s men. Eight ANA soldiers accompanied them.

Deflecting credit over to the Afghans for many events large and small is part of a concerted effort to put the country&#8217;s fledgling army and police forces in the best possible light, especially with the local populace.