Reporter's Notebook: Spider becomes a pain in the butt for soldier 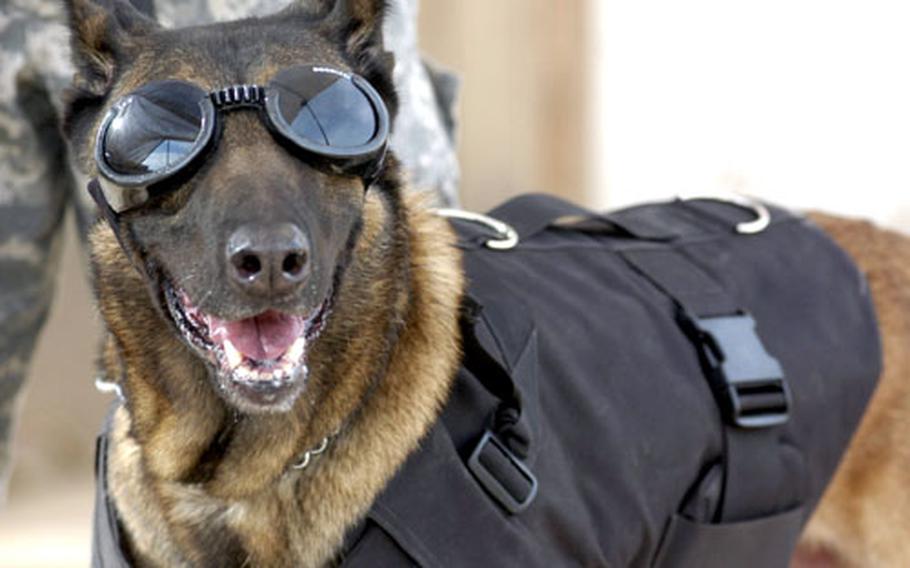 Rudy, a military dog with the 3rd Brigade Combat Team at Contingency Operating Base Speicher in Tikrit, Iraq, sports his protective gear — Doggles and Kevlar vest. The 6-year-old is fiercely protective of handler Audra Rose, 22, from Memphis, Tenn., who normally works at the 6th Military Police Detachment at Fort Rucker, Ala. (Ben Murray / S&S)

But oh, Spc. Michael Alberts from the 3rd Brigade Combat Team in Kirkuk, Iraq, how you have proven them wrong.

Part cautionary tale, part comic farce, Alberts&#8217; story began one night at Forward Operating Base McHenry when he went to bed and was bitten on the rear end by an unknown species of spider.

Once removed, Alberts still had to go in daily to have the &#8220;opening&#8221; cleaned and repacked, and has since had to sit off-center on his chair.

Recently, he&#8217;s also had collagen injections to help the tissue grow back, reinvigorating the cascade of taunts he&#8217;s been forced to endure.

Dogged protectionAsk any police dog in Iraq about how blazing hot sand and alleys laced with glass can feel on bare feet and they will tell you: rough.

The same goes for being caught in a sandstorm without eye protection or standing in a spray of shrapnel without any Kevlar on, so the working dogs of Iraq-based military police units are outfitted with an arsenal of protective gear not all that different from a soldier&#8217;s kit.

Take, for instance, the Doggles &#8212; a brand of protective eye goggles for dogs used by military police around the country to keep sand out of the canines&#8217; eyes during storms.

For their feet, there are booties not unlike those used by sled dogs in winter but employed in Iraq for the complete opposite reason.

&#8220;Over here the biggest thing they help with is the hot sand and also with the sharp objects that could be out there,&#8221; said Staff Sgt. Philip Mohs, 24, a military policeman from Paynesville, Minn.

Then there&#8217;s the Kevlar vest, a specialized cover meant to shield the bulk of the dog&#8217;s body from projectiles.

With the full regalia on, the dogs look slightly comical, and some will not suffer the humiliation. Some get instantly agitated with the goggles or the booties, to the point they become more of a distraction than a benefit, while others bear them with more patience, Mohs said.

Animal farmThe modern-day cordon-and-search operation in many parts of Iraq is a deathly slow business for young soldiers. It&#8217;s all cordon and no search, often starting in the wee hours of the morning and lasting for long, empty stretches of time.

And so it was for members of the 3rd Special Troops Battalion attached to Company A, 2nd Battalion, 27th Infantry Regiment who guarded the back side of a village north of Hawijah on a recent joint operation.

As the sun came up, and it became apparent the only thing stirring would be the livestock in front of them, troops began calling out the only movement they could see.

&#8220;Roger, we have rooster movement,&#8221; said Sgt. Louis Cartegena, a tactical commander of one of the Humvees, eyeballing a group of skinny chickens.

Later, a group of bovines trundled past the trucks and word went out to be advised that there was, &#8220;a platoon of cows approaching.&#8221;

Additionally, there were some mules mixed in with the cows that, &#8220;look suspicious,&#8221; one soldier said.

No shots were fired. No animals were detained.