Reporter's Notebook: Soldiers in Iraq displaying a variety of skills 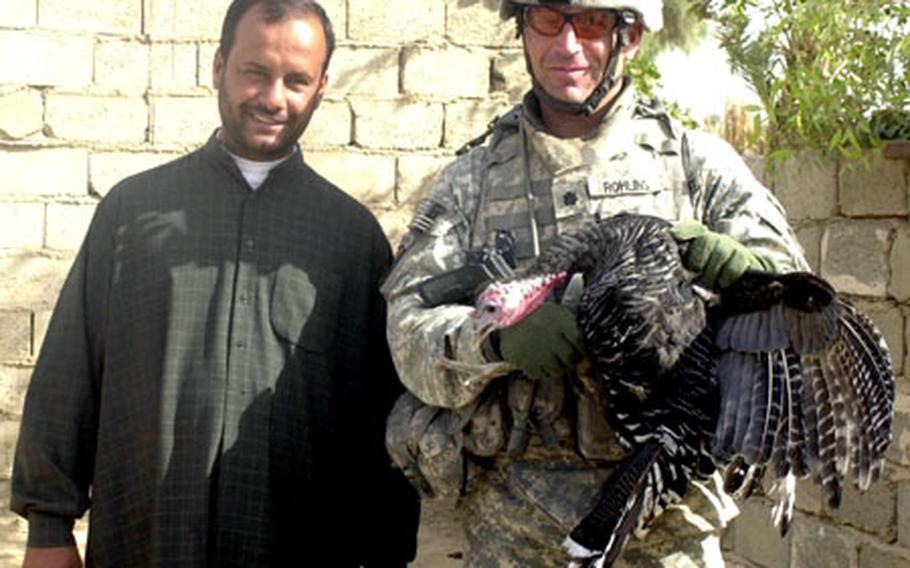 Pfc. Brandon Bock knew he could expect some surprises during his first deployment. But holding up the legs of a woman in labor was way off the radar. Until recently.

The pregnant woman&#8217;s aunt drove her to Patrol Base Inchon because the hospital in Mahmudiyah was too far away, said Sgt. Chawn Cone, a medic who delivered his own children.

The woman gave birth after five hours of labor. The baby received a uniquely Army Airborne welcome to the world.

High-value turkeyLt. Col. Andrew Rohling considers himself an avid turkey hunter around in the countryside nearby the 101st&#8217;s Fort Campbell, Ky., stomping grounds.

Unfortunately for Rohling, no one has reported wild turkey roaming the sands of Iraq.

However, soldiers from Rohling&#8217;s 3rd Battalion, 187th Infantry Regiment spotted a farm with a few turkeys following an air assault into Owesat, southwest of Baghdad.

The battalion&#8217;s list of high-value targets quickly gained another member. Farmers tried to give Rohling a free bird, but he insisted on paying them.

The turkey made the trip successfully by Humvee to Patrol Base Dragon, except for an accident involving a staff sergeant&#8217;s uniform sleeve. Fortunately for him, PB Dragon has its own laundry machines.

Connect with your foodSoldiers from the Team 2 Protective Services Detachment for 3-187 say they do practically everything as a unit, even during their downtime.

Like a lot of close-knit groups, they longed for a way to outwardly display their unity. But shaving everyone&#8217;s heads won&#8217;t quite work for people who are already in the Army.

Fortunately for all, a hand-washing station is conveniently located outside the dining facility.