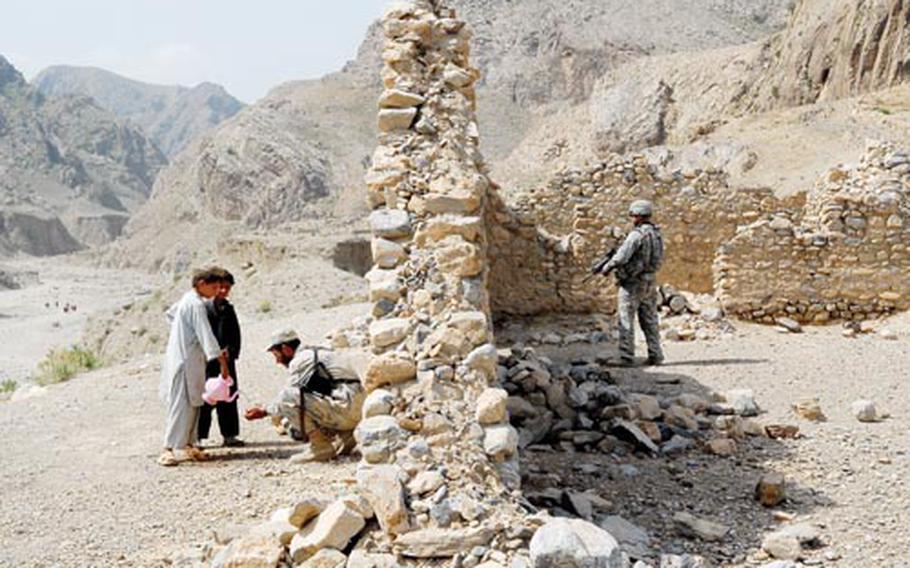 A U.S. soldier guards one side of an abandoned house while an Afghan Border Police officer washes his hands on the other side. (Michael Gisick / S&S)

NANGARHAR PROVINCE, Afghanistan - The few remaining men of the Mulagori subtribe stood on a stony bluff overlooking a dry riverbed a few miles from the Pakistani border.

Scattered around them, the crumbling remnants of the village&#8217;s rock-walled homes looked like ancient ruins.

An old man ambled up with a crooked walking stick.

"The people from the Pekha tribe are so greedy, cruel and very brutal," one of the younger men told the visiting Americans, gesturing toward another village overlooking the riverbed. "They are just occupiers here."

It was the sort of scene U.S. troops in eastern Afghanistan have found themselves dealing with on an increasingly regular basis as they&#8217;ve moved to build closer relationships with Afghanistan&#8217;s often-fractious tribes.

Tribal conflicts provide an opening for insurgents, officers say, and sometimes produce violence on their own. And each conflict, they say, has its own, often long, history.

The conflict between the Mulagori and the Pekha, which are both subtribes of the Shinwari, began about a decade ago, at least according to the Mulagori. That&#8217;s when the Pekha arrived from "somewhere far away" and occupied another bluff overlooking the riverbed. With some 2,000 families to the Mulagori&#8217;s 300, the Pekha quickly came to dominate the smuggling routes through the river, and they grew rich. Their warehouses are filled with tires and random car parts.

Most of the Mulagori have moved away, leaving just 35 families behind. That is the situation inherited by Lt. Col. Patrick Daniel and the soldiers of Special Troops Battalion, 3rd Brigade Combat Team, 1st Infantry Division, which ranges over Nangarhar province.

The battalion has a plan to build a small pipeline that would bring water from the far spring to the Mulagoris. They hope this will coax the exiled villagers home and will provide a counterweight to the Pekha, whose ties to the smuggling trade make them a security concern, Daniel said.

"Once we get the water, and people come back, then we&#8217;ll have friends here to help us keep security," he told the Mulagori men, who nodded vigorously in agreement, then posed for some pictures with the Americans.

Daniel suggested holding a tribal meeting, or shura, with the Pekha, but the Mulagoris seemed cool to the idea. They looked forward to the pipeline, though, they said.

"It is very sweet water," one of the men said. "Since the world was created, it was there."

"That," Daniel said as he walked back down the bluff to his vehicle, "is a very, very typical Afghanistan issue right there."

Another very typical Afghanistan issue played out a few days earlier when a platoon of military police officers from Daniel&#8217;s battalion visited with a district police chief in Jalalabad, the provincial capital.

The soldiers brought two boxes of dates for the police to hand out to locals &#8212; dates being something eat when they break their Ramadan fasts.

Then he turned his attention to gasoline &#8212; also not enough, he said.

The chief changed the subject. He needed machine guns to mount on his trucks, he said. He needed furniture and maps for a new operations center.

It&#8217;s a common story across Afghanistan. U.S. units working with Afghan police say the police are improving, but struggle with a broken logistical system that leaves them dependent on American help. As Fairchild pointed out, he hears the same thing at every one of the city&#8217;s seven police stations.

But, he said, the Ministry of the Interior does have a supply system, and he wanted this police chief to at least go through the motions.

"I understand it&#8217;s not good when we need something that we are always asking you," the chief replied. "The problem is that not only one or two times out of 10, but 10 times out of 10, when we will fill out their form, we will get nothing."

Finally, Fairchild said he understood that the system wasn&#8217;t working.

The police headquarters in the city sends the supply requests to Kabul, he said, "but they never get a response."

Having landed on a common, far-away villain, the atmosphere eased.

"I&#8217;m sorry for complaining about so many problems," the chief said. "I understand that you came all the way from America to Afghanistan, and we appreciate it."