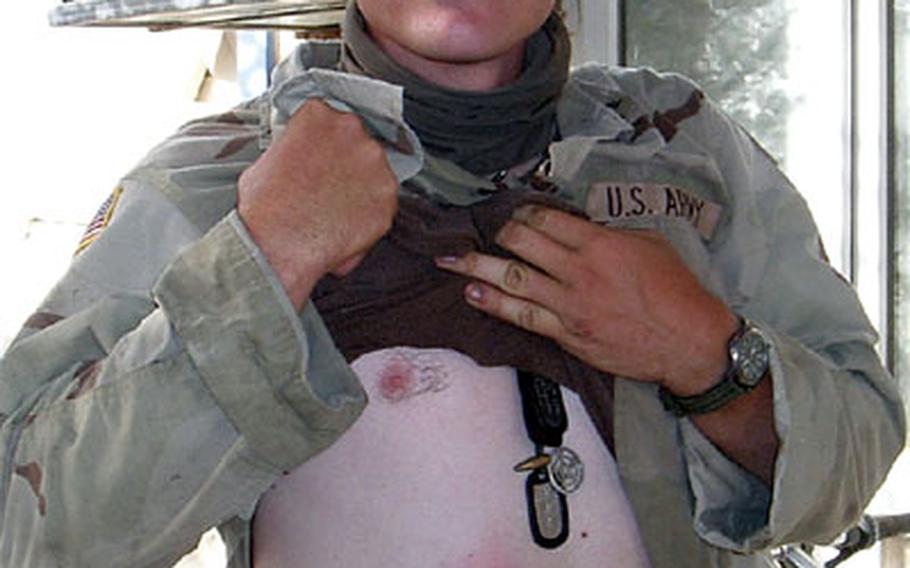 Sgt. Jason Glasscock, 27, of Shreveport, La., was struck a sniper’s bullet on June 15. At the time, Glasscock had opened the hatch of his tank and was reaching for an MRE. His body armor stopped the round but as Glasscock put it: “It felt like someone hit me with an iron pipe.” (Cameron Magee / Courtesy of U.S. Army)

BAGHDAD &#8212; U.S. soldiers who patrol Iraqi streets have learned, bit by bit, where some of the city&#8217;s tastiest snacks are served. Their samplings go well beyond the sweetened tea and flat bread that women and children in Baghdad so often share with passing convoys.

Some seek out whole roasted chickens and vegetables. Some choose ice cream. Some meals, however, prove a little more treacherous.

One soldier got a little more than that. Sgt. Jason Glasscock, 27, of Shreveport, La., went out on patrol a little after 2 p.m. in an M1A1 tank with 1st Battalion, 156th Armor.

Glasscock didn&#8217;t have time to eat before leaving and after about an hour of duty, he decided it was time for lunch. Glasscock popped up his hatch and reached for an MRE.

The next thing he knew, Glasscock felt like someone had struck him with an iron pipe. He was hit by a sniper, and his friends rushed over to see how badly he was hurt. They started ripping off his clothes to find out where he was bleeding.

Turns out that he wasn&#8217;t. The bullet hit his body armor, not him. He has a bruise the size of a grapefruit on his stomach, but otherwise, is doing fine.

Iraqi soldiers are learning, alongside their American counterparts, how to better secure and defend their capital city from insurgent attacks. They&#8217;re learning improved shooting tactics, how to protect fellow soldiers during advances and retreats, and the importance of recording everything on a military form.

So perhaps it&#8217;s natural that some Iraqi soldiers have discovered another, often discouraged, part of military life: complaining. And taxes.

1st Lt. Fala Add Al-Kharlim, a platoon leader with a company that patrols Haifa Street in Baghdad, says his soldiers are disheartened because of faulty equipment and shrinking paychecks.

They complain about guns falling apart, about worn flak jackets. They say some use their own money to buy their uniforms on the black market. They collect money for medical care when a fellow soldier is injured. They hear that others are entering the growing Iraqi army at equivalent ranks that Fala&#8217;s soldiers say they&#8217;ve earned in the last two years.

Fala said some of his soldiers are thinking of quitting. His platoon two years ago had nearly 50 soldiers, he said. Now it&#8217;s down to about 30.

The soldiers also are mad about what they call a $70 cut in their monthly pay. Soldiers, on average, earn $300 to $400 a month, they say. The reason, it turns out, is something nearly every American begrudges, whether a soldier or not. For the first time, the Iraqi government began taking taxes out of the platoon&#8217;s paychecks.