Reporter’s Notebook: Shoveling snow, shuttling troops all in a day’s work at Manas 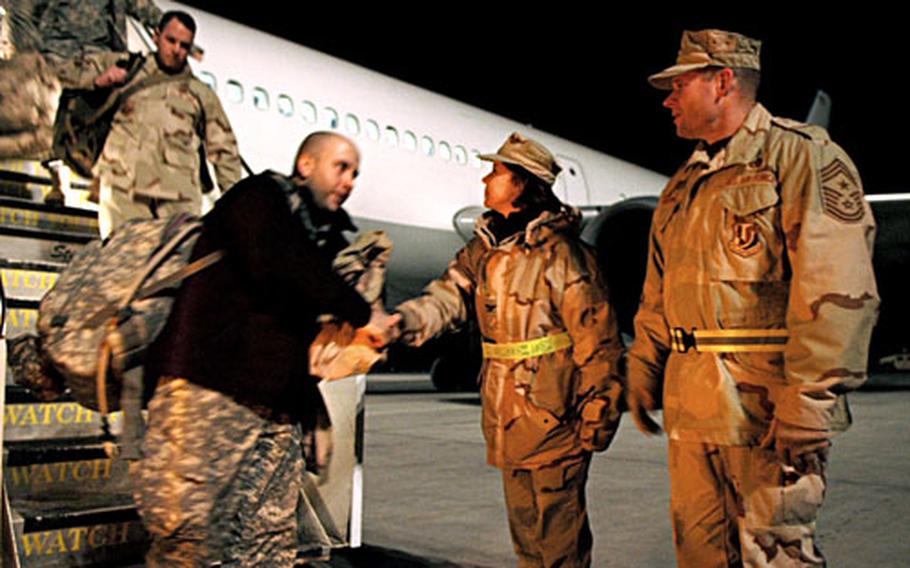 MANAS AIR BASE, Kyrgyzstan &#8212; Imagine living in a small town where the population doubles, then halves, once a week.

Welcome to Manas Air Base, the primary hub for troops heading to and from Afghanistan &#8212; and, with a recent uptick in troop rotations in and out of Afghanistan, a pretty hopping place.

Every week, the 1,100-plus airmen who inhabit the base full-time play host to 1,000 to 1,200 transient troops, both American and foreign. Each week, airmen at the base conduct more than 80 air missions, pump about 200,000 gallons of jet fuel, move and house 1,000 transients and allot no more than six beers to each resident and visitor.

Base staff say they have allotted themselves one extra duty.

Let&#8217;s hear it ...Although the base has fewer people than a small high school, it appears to have an unusual abundance of cheerleaders.

At a spirited awards and promotion ceremony Friday, groups gathered to cheer on their friends &#8212; and themselves.

&#8220;If your hands are in the air, we put them there,&#8221; yelled members of the 376th Expeditionary Security Forces Squadron whenever an airman from the group was awarded a promotion.

Keeping clear ...The air base&#8217;s typically Russian weather &#8212; snow, ice, snow, freezing winds and some more snow &#8212; pose a unique challenge to airmen of the 376th Expeditionary Logistics Readiness Squadron&#8217;s petroleum, oil and lubricants flight. During the winter, temperatures often dip into the negative side of the Fahrenheit scale.

The 35 members of the flight are sequestered near Manas International Airport&#8217;s commercial terminal, a sagging, grey passenger building that occasionally receives aging commercial planes on its pothole-strewn tarmac.

From those uninspiring settings, the group energetically maintains about 2 million gallons of jet fuel, about 200,000 gallons of which are pumped into planes heading into and out of Afghanistan.

But the job involves much more than pumping gas: Airmen also have to keep a close eye on the oil yard&#8217;s 14 fuel bladders, shovel snow out of 7-foot deep trenches around the fuel bladders, and process and inspect all fuel to ensure it meets military standards.

Their labors at the oil yard earn them pride and something else: a distinctive aroma.