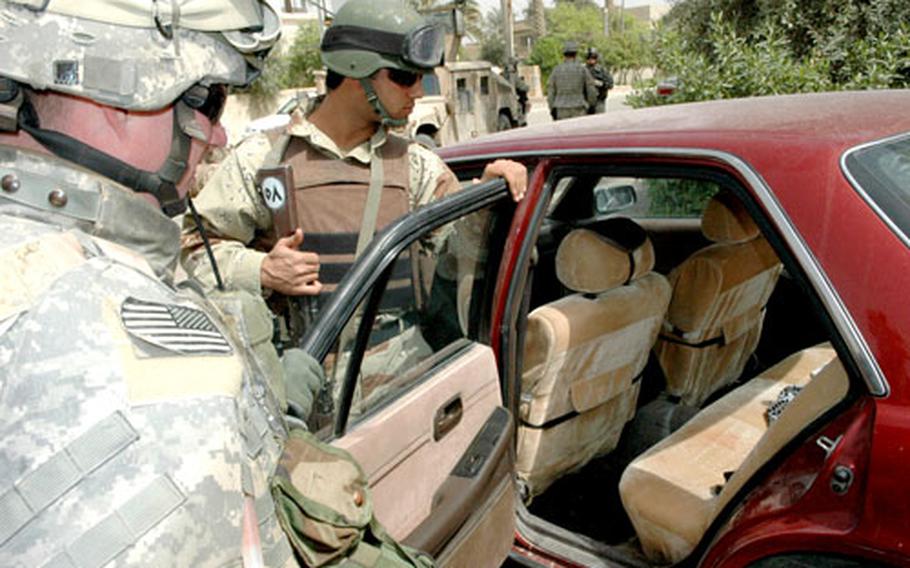 Capt. Mike Fortenberry examines red stains on the back seat before deciding not to detain an Iraqi driver. (Andrew Tilghman / S&S)

Before heading out for a day of driving over some of Iraq&#8217;s most dangerous roads, Sgt. Stephen Carey just wanted to see the midget.

&#8220;Come on, come on, come on,&#8221; Carey said, peering through the inch-thick window of the armored Humvee as he rolled out of a gate at Camp Stryker.

Approaching a nearby farmhouse, Carey exalted when he finally saw the unusually short Iraqi man smiling and waving at the convoy passing by.

Maj. Eric McFadden explained that many soldiers in the 101st Airborne&#8217;s 2nd Brigade Combat Team, which has taken more than 31 fatal casualties since arriving in November, believe seeing the little man each morning is a good omen for a safe mission.

Several troops pulled over a Mercedes sedan recently and found the back seat was splattered with red stains.

Initially, the soldiers thought this might be evidence of a crime and considered detaining the driver, a man in his mid-40s.

But Capt. Mike Fortenberry said the stains alone were not enough to detain the man.

Iraqi Army, police suspicious of each otherGetting the Iraqi army and the Iraqi police to share security duties is hard, but getting them to share food is even tougher.

About a dozen Iraqi police officers recently came onto an Iraqi army base in Baqouba, where U.S. soldiers were offering a two-day class in emergency medical care.

The Iraqi army allowed the police to use an empty building as a classroom, but access to the chow hall was a different story.

&#8220;The food is limited,&#8221; an Iraqi army soldier said, explaining that soldiers had not received an official memorandum saying the police could eat there.

Staff Sgt. Rodney Dippel, a medic who was teaching the class for the Iraqi police force, urged the soldier to consider that the police officers were fellow countrymen.

About an hour later, the Iraqi soldier returned, interrupting the class to tell Dippel that the police could eat in the chow hall, if necessary. The soldier left without making any eye contact with the police.

U.S. soldiers who work with the Iraqi army and police say mutual suspicion and even outright friction are common.

Every day in the headquarters of the 101st Airborne&#8217;s 2nd Brigade Combat Team, soldiers pop into the public affairs office to test their recollection of popular music from the 1980s.

That&#8217;s where Sgt. Joy Kroemer, who is 32 and grew up in Auburn, Ind., selects and posts a single song lyric on a dry erase board, tempting others to guess the musician and song title.

&#8220;Some of the lieutenant colonels like hair bands, so I try to get some from hair bands like Winger and Poison,&#8221; Kroemer said.

Kroemer keeps a running tab for more than a dozen participants, awarding a point for each correct match.

Some of soldiers on the headquarters staff are in their 30s, and have vivid recollections of the music of their teen years. Others, however, appear to have absolutely no knowledge of the popular music they grew up with.