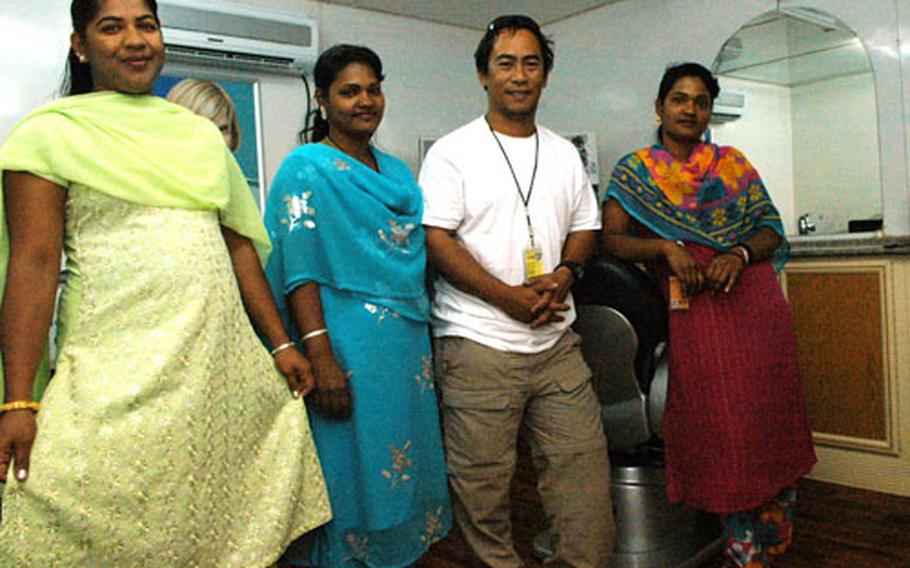 There are beauty shops even in Iraq to pamper servicemembers deployed here. Kerwin Mateo from the Philippines works in Camp Fallujah&#39;s Beauty Shop with three women from India. Most of his customers are men, he said. (Allison Batdorff / S&S)

And your friends take one look at your scabby, scratchy outstretched hand and opt for a knuckle-knock instead of a handshake.

Servicemembers pick up all sorts of critters in Iraq, according to a Navy corpsman with the 3rd Battalion, 3rd Marine Regiment. He said that although the unit had been in Iraq only two months, a couple of guys had bedbugs.

And while he recommended hydrocortisone for the itch and Elimite for the bugs, the battalion helpfully tossed in homespun treatments.

Maj. Jonathon Bossie of Weapons Company suggested the tip of a match on each bite. Or nail polish.

But the best way to stop an itch is to quit thinking about it, he said. The mere mention of scabies, fleas and bedbugs is enough to elicit sympathy scratching.

The barber shop does far brisker business, but men also seek out the beauty shop&#8217;s array of inexpensive services, from 30-minute cold facial massage to manicures and pedicures geared to dig the desert out from under the nails. There are plenty of pampering options.

Some men come in groups, and joke and take pictures of their friends while they get the treatments, Mateo said. Especially photogenic is eyebrow threading &#8212; the pluck-free, but somewhat painful process of turning jungle-brow into a well-shaped hedgerow.

There&#8217;s one thing that Mateo said holds true in most of the cases: Beauty shop men are getting ready to see a significant other, and want to look hot, not I&#8217;ve-just-spent-five-grubby- months-in-110-degrees hot, but clean and sexy, he said.