Reporter's Notebook: Roughing it on the border 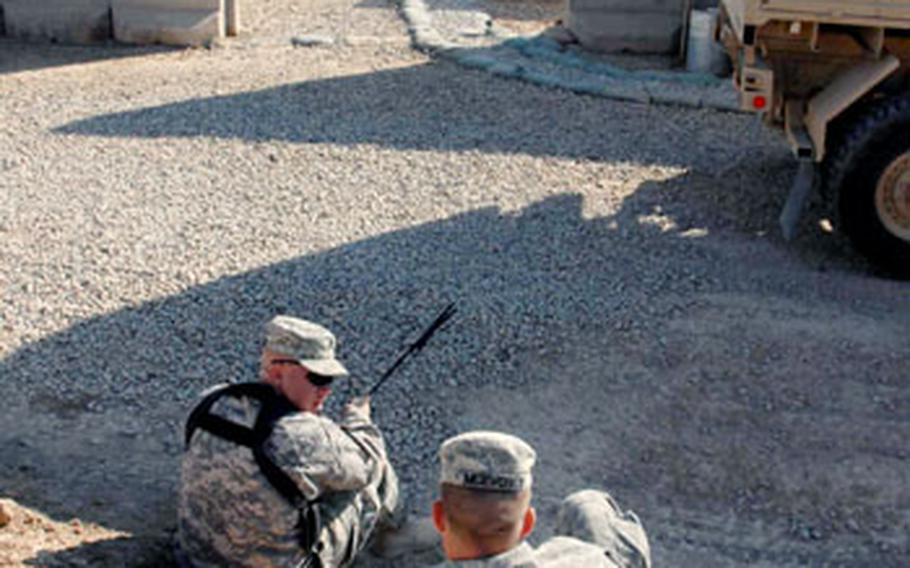 Staff Sgt. Jason McQuesten, left, and Sgt. Robert McEvoy fill some downtime at their joint security station by talking. Soldiers say there is little to do in their free time except watch television and movies, eat, and work out at the gym. (Ashley Rowland / S&S)

Staff Sgt. Jason McQuesten, left, and Sgt. Robert McEvoy fill some downtime at their joint security station by talking. Soldiers say there is little to do in their free time except watch television and movies, eat, and work out at the gym. (Ashley Rowland / S&S) 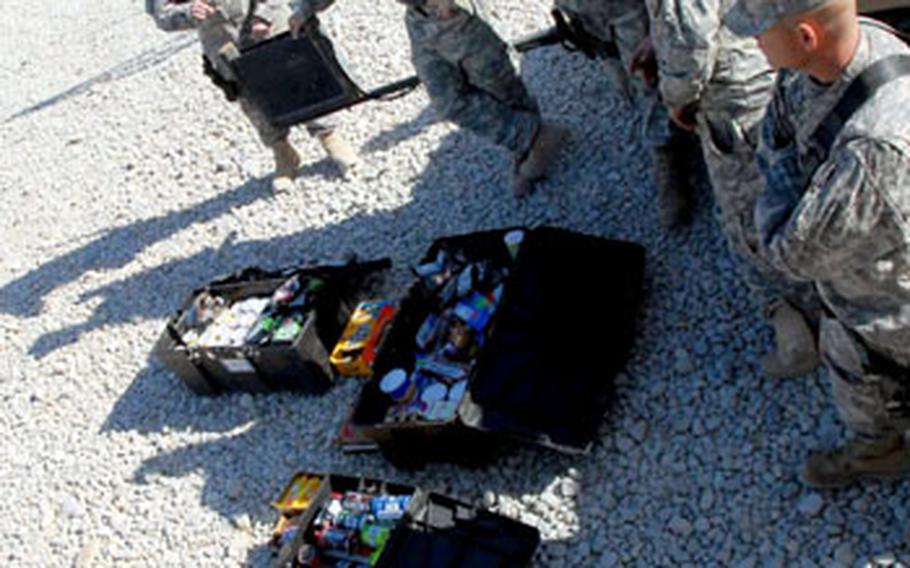 Soldiers relax outside a makeshift post exchange at Command Outpost Shocker, which is close to the Iranian border and home to about 270 soldiers and contractors. Sgt. 1st Class Lonnie Westbrook brings four lockers of goods from the Army and Air Force Exchange Service whenever he travels from Forward Operating Base Delta, about an hour&#39;s drive away. (Ashley Rowland / S&S) 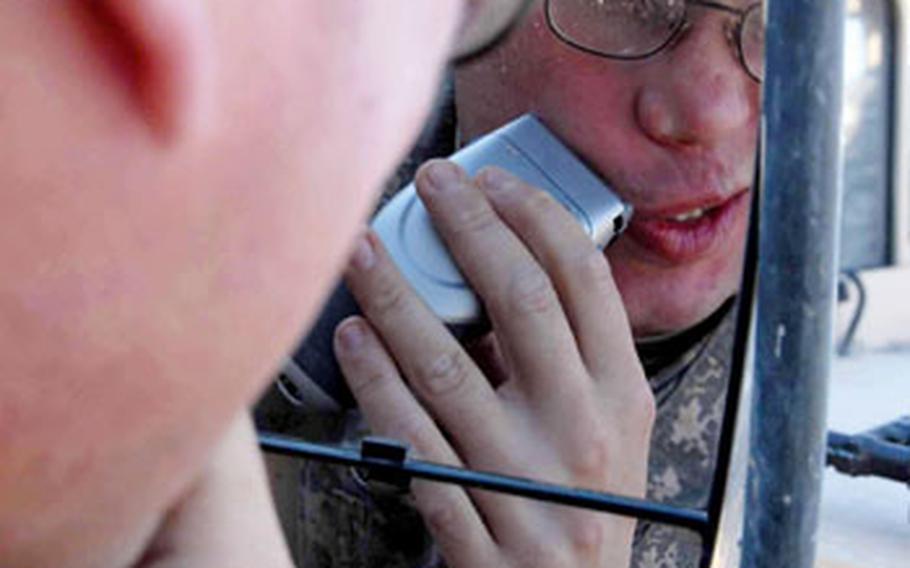 Pfc. Juan Figueroa peers into a Humvee mirror as he shaves at Forward Operating Base Delta shortly before heading back to al-Mutanabi. Troops stationed at the bare-bones joint security station at al-Mutanabi go to Delta, home to about 2,400 servicemembers and civilian contractors, every few weeks to pick up mail, get haircuts and go to the post exchange. (Ashley Rowland / S&S)

MUTANABI, Iraq &#8212; This tiny outpost near the Iranian border is little more than a collection of tents, but might be the safest place in Iraq.

Mutanabi has never been attacked, and, aside from a vehicle rollover that caused no serious injuries, there have been no mishaps when soldiers go on patrols.

In fact, they say their biggest problem is trying to squeeze a hot shower out of the base&#8217;s one water heater.

"The last time there was any fighting around here, as far as I know, was during the Iran-Iraq War," said Capt. Adam Ropelewski, commander of Battery B, 2nd Battalion, 20th Field Artillery Regiment.

About 60 U.S. soldiers and 40 Iraqi soldiers are stationed at Mutanabi, about 15 miles from the border.

The living here is bare bones. Soldiers sleep in tents and eat at a tiny dining facility that serves two hot meals a day out of plastic coolers.

And they love it, because they&#8217;re far from the flagpole.

"We keep to ourselves," Sgt. Robert McEvoy said. "We do our job and rest."

"Being out here, you don&#8217;t have to deal with anybody," Staff Sgt. Jason McQuesten said.

When they&#8217;re not working, the soldiers say they have what they need &#8212; a gym, a few computers with Internet access, and movies.

Soldiers go to Forward Operating Base Delta, about an hour away, once every few weeks for a haircut and to pick up mail and laundry and shop at the post exchange. Aside from a chance to get a hot shower, it&#8217;s a one-hour trip that many of them don&#8217;t look forward to.

"Believe it or not, we get down there, and as soon as we get there we want to come back," said 1st Sgt. Eduardo Iturregui.

Mutanabi&#8217;s proximity to Iran may, ironically, be one of the reasons the area has been free of insurgent activity. Many people in the border towns make their living from traffic between the two countries, particularly Iranian pilgrims traveling to a religious site in Karbala.

Although U.S. soldiers haven&#8217;t caught any smugglers, locals believe illegal traders from Iran frequently pass through the area but don&#8217;t want to attract attention and jeopardize their routes by attacking the Americans.

"I don&#8217;t think they want to cause too much trouble that could lead to a lockdown on the border," Ropelewski said.

Simple pleasuresIf a soldier volunteers to go to tiny Command Outpost Shocker for the day, it may not be because of the mission. He probably just wants a sandwich.

Shocker is about three miles from the Iranian border and home to about 270 troops and contractors. Not to mention the most famous sandwiches in southern Iraq&#8217;s Wasit province.

The sandwich bar, which is in Shocker&#8217;s small dining facility, has the standard toppings: Meat, mayo or mustard, tomatoes, lettuce, pickles and other veggies. Ham and turkey sandwiches are most popular, with tuna not far behind, Bala said. On one recent lunch hour &#8212; the only time the sandwiches are served &#8212; there was a five- to-10-minute wait at the sandwich bar, whose line was far longer than the one for hot food. What makes theses sandwiches so special? Soldiers say it&#8217;s the bread: soft, fluffy, and most importantly, made fresh every day.

Think Subway, but better, they say.

"Oh man, freaking Shocker sandwiches. That&#8217;s why I love to go up there," said Sgt. 1st Class Andrew Pastusic, who is stationed at the much larger Forward Operating Base Delta.