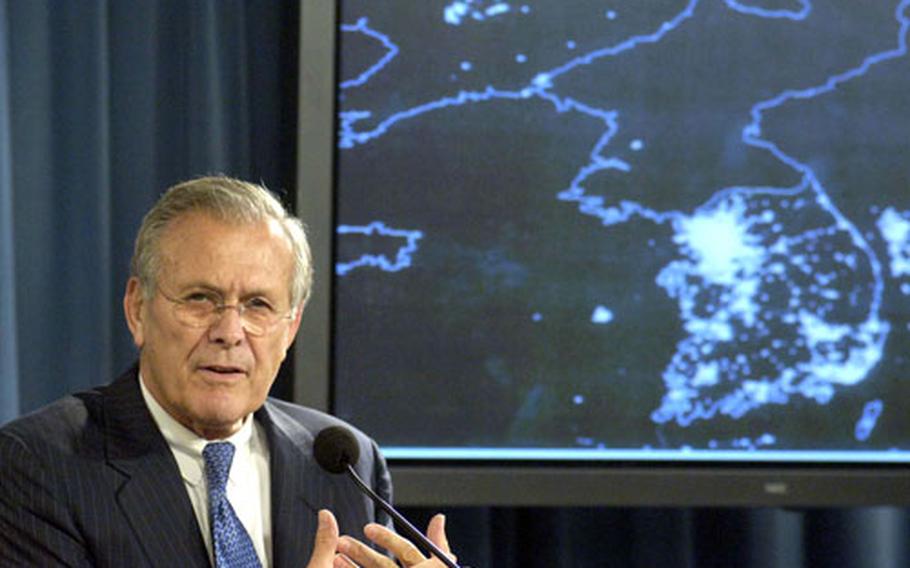 Defense Secretary Donald H. Rumsfeld addresses a reporter&#39;s question about the significance of the reported North Korean nuclear test during a Pentagon press briefing, Oct. 11, 2006. As part of his response, he showed reporters a satellite view of the Korean peninsula taken at night. (DOD photo by R. D. Ward)

ARLINGTON, Va. &#8212; On Friday, I spied a familiar looking picture being tossed into a trash bin somewhere in the Pentagon.

The picture looked a lot like a prop former Defense Secretary Donald Rumsfeld used to show the difference between communist North Korea and democratic South Korea.

Taken at night, the satellite picture shows how the south is lit up, while the north is dark, with the exception of one spot over Pyongyang.

"What a difference between freedom and oppression: In one the light of liberty outshines everything, and in the other the darkness of the dictatorship is so obvious even from so many miles in outer space," Rumsfeld told the U.S/Korean Business Council Luncheon in 2003.

I couldn&#8217;t let such a valuable piece of Rumsfeld nostalgia get tossed onto the scrap heap of history.

So with the permission of the person throwing it away, I liberated it.

No one could say for sure if the photo was the picture Rumsfeld showed to reporters at briefings, but it very well could be.

So being the mature adult I am, I walked around the Pentagon telling every passerby: "Remember this? It&#8217;s mine now. I own it."

As I walked around as proud as a Basset hound with a piece of garbage in his mouth, one person asked if I could will it to him if I died on my way back to my desk.

To me, this picture is about freedom. It reminds me of the freedom we in the press have to be a thorn in the side of the powers at be, such as Rumsfeld himself.

Rumsfeld may have had his problems with the press, but he was a strong advocate for freedom, so I know he would appreciate that a member of the fourth estate received a copy of one of his most prized possessions.

"Except for my wife and family, that is my favorite photo," Rumsfeld said in 2006.