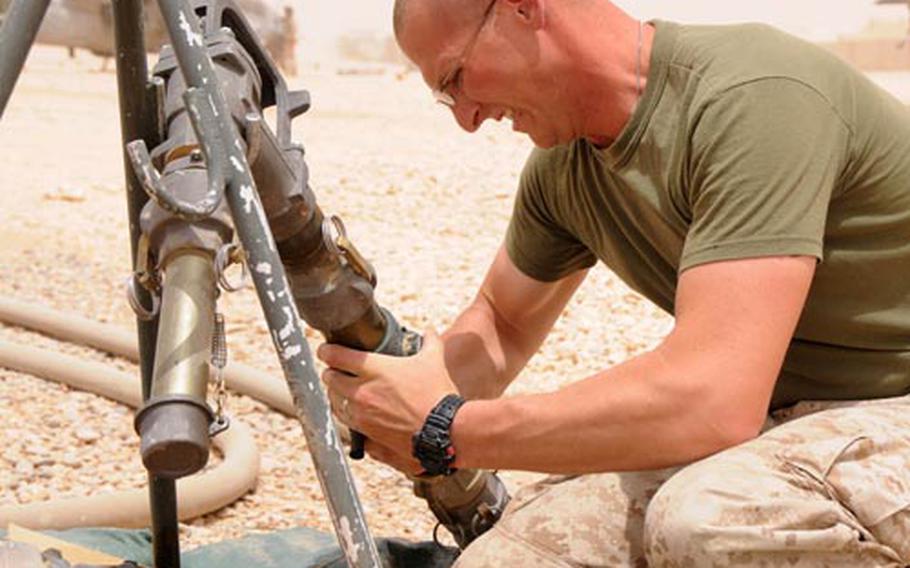 Lance Cpl. Brian Schrieber, 26, of Richmond, Va., goes about his business as one of four aircraft refuelers at a combat outpost in Rawah, Iraq. They pretty much eat and sleep at their jobs. (Cindy Fisher / S&S)

RAWAH, Iraq - They breathe, eat and sleep their jobs.

They have to, since the four members of Marine Wing Support Squadron 172 dispense fuel around the clock at Combat Outpost Rawah in Anbar province.

They are doing the job of eight people keeping the aircraft at Rawah ready to fly at a moment&#8217;s notice, said Sgt. Carlos Ramirez, from Tampa, Fla., fuels chief for the squadron&#8217;s Combat Outpost Rawah detachment.

Living, eating and sleeping in the same small building has built strong bonds among the four, said Lance Cpl. Brian Schreiber, from Richmond, Va. They&#8217;ve learned one anothers&#8217; strengths and weaknesses and developed a strong team, he said.

They have also adopted a fifth member into their family &#8212; Lance Cpl. Daniel Lopez, 23, an expeditionary airfield specialist from Flint, Mich., who was looking for a place to call home at Rawah. When the fuels section gets busy, Lopez even pitches in to help, Ramirez said.

Ramirez, as the senior Marine and the oldest of the group, provides the leadership and maturity to help ensure the group works smoothly. At 37, he is 11 years older than Schreiber. The rest are in their early 20s.

As with every family, each person has his own quirks and specialties.

Ramirez and Lance Cpl. Travis McClure, from Centerville, Iowa, are the grill masters when they have fresh meat. McClure makes the best ribs, with meat so tender it falls off the bone, Ramirez said.

"Schreiber did it once and we fired him because it took him three hours to cook hot dogs," Ramirez explained.

There are times when they get on one another&#8217;s nerves, said Ramirez. But they&#8217;ve all come to recognize when one of the group needs to talk about a problem and when he just needs to be left alone, he said.

Keeping the room neat with everything in its place also helps keep things on an even keel, Ramirez said.

But no one is a neat freak, he said.

"There are times when I wake up and just start putting things in their place," he said then added, "Maybe I&#8217;m the neat freak; I might be."

Then "everybody blames the weather guy," claims one member of Marine Wing Support Squadron 172 in Rawah.

Staff Sgt. Antonio Boyd, from Meridian, Miss., and a weather forecaster with the squadron&#8217;s Combat Outpost Rawah detachment, said when the sandstorms hit, they are blamed for everything from late mail to delayed supplies.

But the sandstorms are not the forecasters&#8217; fault; they are actually the result of the Shamal winds, the northeast winds that commonly flow through this region at this time, Boyd said.

Predicting the weather here is pretty easy, he said. The only difference from other places is that there are no clouds, he said.

In addition to using specialized equipment, weather forecasters look at the weather from previous years, he said. During the summer, temperatures average from 110 to 112 degrees Fahrenheit, he said.

Once the Shamal winds are gone, Boyd says, the summer weather will be pretty straightforward: