Reporter’s Notebook: Puddle of Mudd gets taste of military style in Iraq 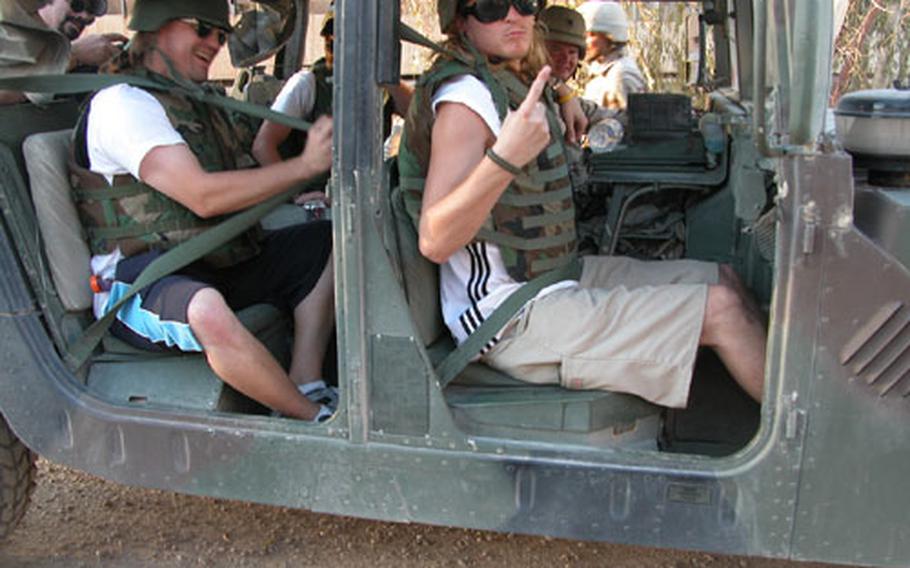 Members of the rock band Puddle of Mudd don body armor and climb into a Humvee as they get a lift to their concert for the troops at FOB Speicher last Sunday. At least 1,500 soldiers attended the show. (Lisa Burgess / S&S)

Members of the alternative rock band Puddle of Mudd may be used to wearing whatever they like and traveling in limousines, but when they were in Iraq last Sunday they were told what to wear and what kind of ride to use.

They did not object.

When they made their way to the stage at Forward Operating Base Speicher they were wearing body armor over their T-shirts, sneakers and shorts, and rode in Humvees to help ensure their safety.

And that was not their only new experience: The band members also took their first ride in a Black Hawk helicopter the next day.

Riding in helicopters is nothing new for some members of the 1st Squadron, 4th Cavalry Regiment, a Germany-based unit currently stationed at Forward Operating Base McKenzie.

The soldiers have their own air assets: Kiowa Warriors, small, extremely agile two-seaters that &#8220;really add a lot to the fight,&#8221; according to Maj. Michael McCurry, of Mountain Home, Idaho, the deputy squadron commander and senior aviator of the 1-4 Cavalry at FOB McKenzie.

Part of McCurry&#8217;s job is to manage air crew training, aviation maintenance on the Kiowa Warriors and ammunition. He also makes sure the helicopters are integrated into the ground maneuver plans when the tanks and Bradley fighting vehicles have missions.

Racking up the mileage

As an example of the wear and tear the U.S. military&#8217;s vehicles are getting in Iraq, the 1-4 Cav&#8217;s daily missions are putting at least 100 kilometers each day on the squadron&#8217;s M1A1 Abrams tanks and Bradley fighting vehicles, according to Sgt. 1st Class Michael Ward, a Troop B platoon sergeant from Wilmington, Del.