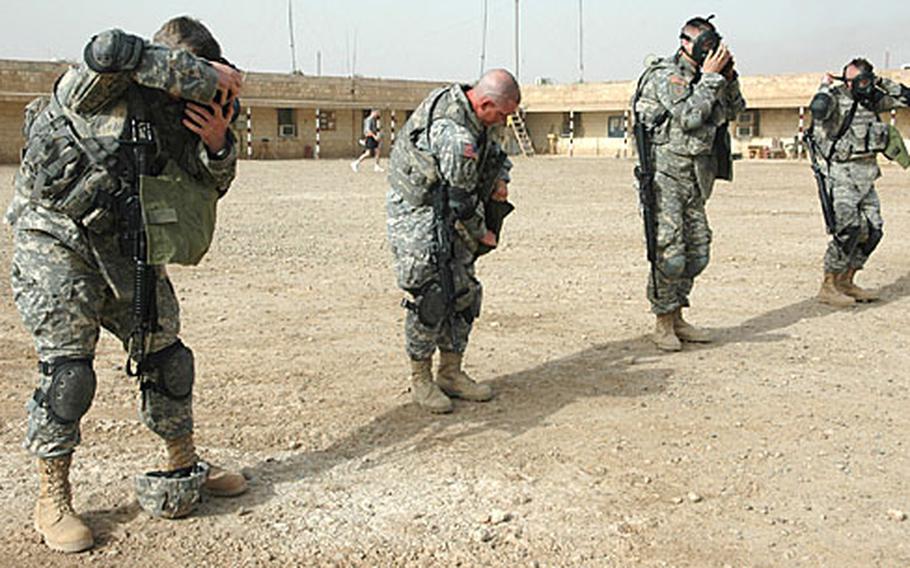 Spc. Ryan Hicks, third from the left, puts on his gas mask in less than nine seconds, one of the tests required to allow him to sit for the promotion board. (Teri Weaver / S&S)

Yes, the 25-year-old from Tallahassee, Fla., is living at Camp Ramadi, just a stone&#8217;s throw away from the city that al-Qaida in Iraq once claimed as its capital.

But Wednesday morning, he had to face a more immediate foe of another sort &#8212; the sergeants in his unit who would decide on his promotion from E-4 to E-5, the solid terrain of noncommissioned officers.

&#8220;That&#8217;s the goal: to mess with us to see if you can act under pressure,&#8221; said Hicks, a member of the 1st Battalion, 77th Armor Regiment, part of the 1st Brigade Combat Team, 3rd Infantry Division headquartered at Ramadi.

Hicks and others like him may have a bigger advantage going in front of the promotion board in Iraq than they would at their unit&#8217;s home in Germany, Gear said.

For Hicks, so far, so good. On Wednesday morning, he passed his GATES test, a series of hands-on tasks that measure a soldier&#8217;s ability to treat wounds, don a gas mask, call for the explosive ordnance team and read a map.

Thursday, he knew, would be a different fight. He and a handful of others would go before a panel of higher-ranking soldiers for questioning.

Kudos for the commandantHis squad calls him the Commandant. Like most nicknames, it brings equal parts respect and abuse.

Sgt. Troy White, 20, of Owasso, Mich., is the Marine of the Year for the Marine Expeditionary Force I, which includes America&#8217;s West Coast. To achieve the honor, White sat through interviews from his own base in Twentynine Palms, Calif., up to division level.

Neither was in question that night. White and others Marines from his unit patrolled Ramadi a year ago, when gunfire and roadside bombs were more the norm. This month, the unit returned for a second tour in the same area to find pockets of calm in the same city.

It was White who best tracked the route among a crew that included the company captain. It was White who reported a child they passed had pointed westward and said &#8220;boom,&#8221; a sign hard to read but ominous enough that the group changed their tack.

And it was White who noticed where too many fuel tanks were piled up on a corner. Even as the neighborhood enjoys a measure of peace, White saw the intersection and a potential explosion from a car bomb.

Goodies from homeFriday was mail call for the 3rd Battalion, 7th Marine Regiment, only their second since deploying from California in recent weeks. And Friday&#8217;s shipment to Forward Operating Base Hurricane Point was the first with boxes, care packages full of goods from home.

Some Marines got nothing.

And some know that more is on the way. One Marine is waiting for a package from his wife that contains yellow plastic lemons full of lemon juice, so he can mix it with sugar and water in the Iraqi desert and make lemonade.