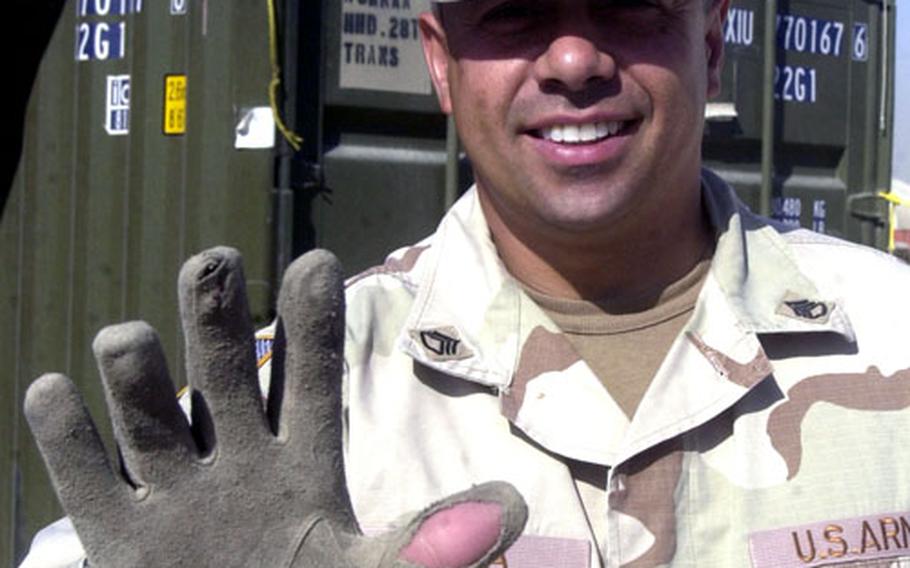 Army Staff Sgt. Eliezer Silva, with the 28th Transportation Battalion out of Mannheim, Germany, shows what the Kuwati heat can do to a leather glove. (Steve Mraz / S&S)

CAMP ARIFJAN, Kuwait &#8212; Prior to takeoff of a recent World Airways flight from Ramstein Air Base, Germany, to Kuwait City International Airport, several announcements were made that the trip was a nonsmoking flight, which included smokeless tobacco.

But flight attendants wise to the habits of troops stuck on a plane for a few hours knew better.

An announcement was made that if troops broke the rule and decided to use smokeless tobacco products &#8212; such as chewing tobacco and dip &#8212; they were to use (spit in) a container with a closeable lid and were not to hand those containers at any time to flight attendants.

The announcement drew smiles and snickers from more than a few troops on the plane.

Leather-scorching heatYou know it&#8217;s hot outside when something you touch burns a hole in a leather glove. Such was the case for Army Staff Sgt. Eliezer Silva with the 28th Transportation Battalion out of Mannheim, Germany, when he was working on the maintenance tent last August at Camp Arifjan, Kuwait.

When he touched a pole on the tent, the sun-broiled metal burnt a hole in his leather glove on the right thumb. Silva noticed the glove burn before it got to his hand, and he was unscathed. Silva still has the glove today and shows it off as a reminder of what the desert heat can do.

Thumbs down to &#8216;likership&#8217;Several sequential signs around Camp Arifjan remind troops to look like a leader, act like a leader and be a leader. The last sign in the series tell troops that &#8220;we need leadership, not likership.&#8221;

While not in the dictionary, likership&#8217;s meaning is clear when seen in the context of the signs. Basically, be a leader and not a follower or brown noser. At the very least, the unusual word grabs the average Joe&#8217;s attention and gets him talking about leadership and likership.