Reporter's Notebook: No digging allowed without prior permission 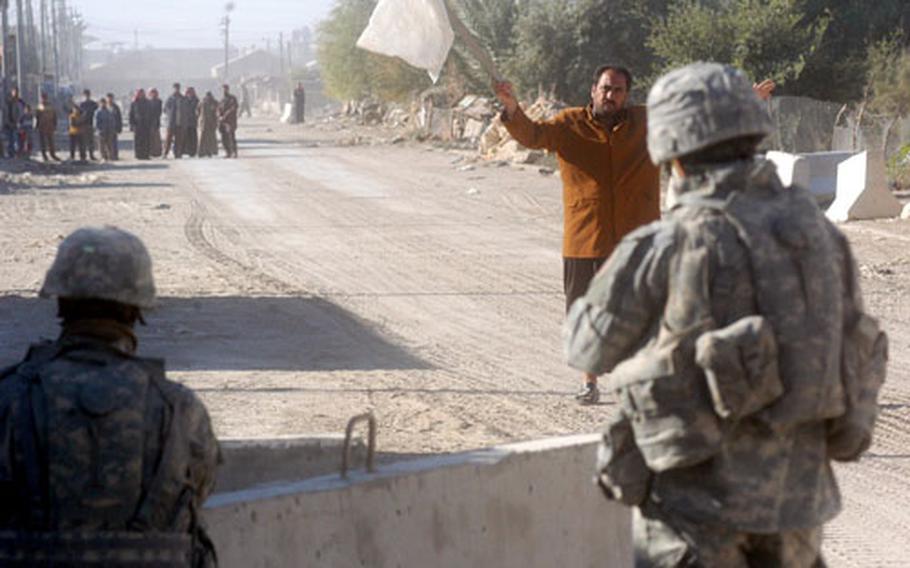 A man waving a white flag on Wednesday approaches soldiers of the 1st Battalion, 18th Infantry Regiment outside Combat Outpost Steel in Ta’meem, Iraq, a suburb of Ramadi. The man wanted permission to dig a hole so he could fix a broken water pipe. Digging is forbidden in the area because insurgents do it to plant roadside bombs. (Charlie Coon / S&S)

A man waving a white flag on Wednesday approaches soldiers of the 1st Battalion, 18th Infantry Regiment outside Combat Outpost Steel in Ta’meem, Iraq, a suburb of Ramadi. The man wanted permission to dig a hole so he could fix a broken water pipe. Digging is forbidden in the area because insurgents do it to plant roadside bombs. (Charlie Coon / S&S) 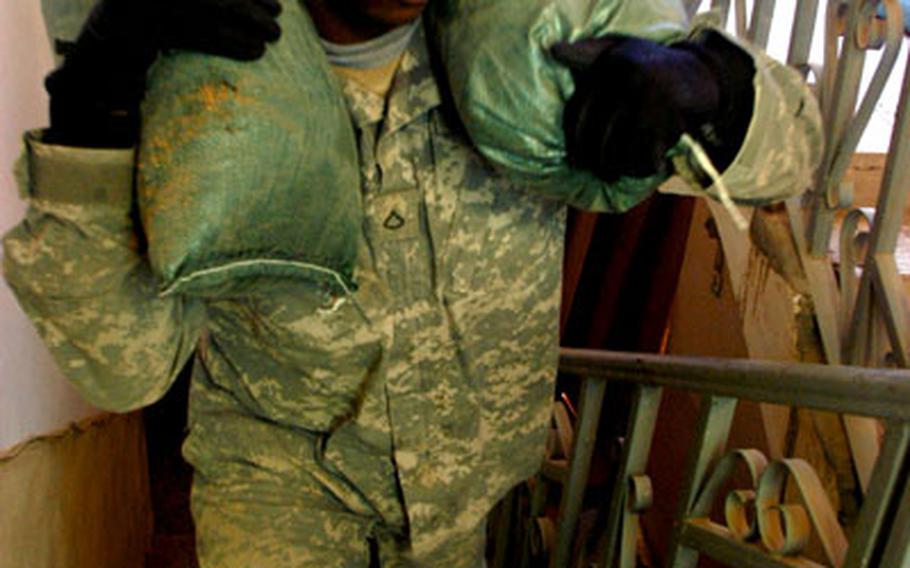 Pfc. Anthony Santiago of Geneva, Ohio, and 1st Battalion, 18th Infantry Regiment carries sandbags up the stairs at one of the buildings that make up Combat Outpost Steel. The fortress, located in Ta&#39;meen, Iraq, on the outskirts of Ramadi, was being fortified by soldiers from the unit against attacks by insurgents. (Charlie Coon / S&S)

Nor can they pull out a shovel and start digging. That might get them shot.

On Wednesday, a group of people nervously waving a white flag shuffled up to Combat Outpost Steel, a fortress recently established in the middle of Ta&#8217;meem, a town next to Ramadi. The fortress is occupied by soldiers from the Iraqi army and from the Schweinfurt, Germany-based 1st Battalion, 18th Infantry Regiment.

Ta&#8217;meem is like a city ghetto. There&#8217;s not a blade of grass to be found, just dirt. Low-rise, ramshackle buildings surround the fortress for blocks, and many of the people who live in them either hate Americans or distrust them. Bombs buried by the roadside have been a big problem, hence no digging is allowed.

When hearing of their visitors, a group of U.S. soldiers and their interpreter cautiously approached them. The interpreter asked a representative to come forward. A man carrying the white flag went to the soldiers.

After showing the soldiers he wasn&#8217;t wearing a suicide bomb belt beneath his clothes, the man explained the problem with the water pipe. He said the pipe had been broken for 20 days, and his household was without water.

&#8220;If [digging] is beside the road, you have to get permission first from the commander,&#8221; said Sgt. Oneil Wright, a Bradley fighting vehicle gunner, who fielded the request.

The man was told through the interpreter to come back Thursday and talk to the 1-18 company commander, Capt. Adam Rudy.

A real &#8216;fixer-upper&#8217;COP Steel was opened Oct. 12 by the prior unit here, the 2nd Battalion, 6th Infantry Regiment from Baumholder, Germany. The 10 buildings that make up the fortress were confiscated by the 2-6 from the Iraqis who were living in them. The Iraqis were given money for their property and relocated.

The fortress is a real fixer-upper, to put it nicely. And last week, soldiers from the 9th Engineer Battalion were at work making improvements.

On Wednesday, 1st Lt. Steven Katz of Deerfield, Ill., engineer for the Schweinfurt, Germany-based Task Force 1-77 Armor, which oversees areas west of Ramadi, said his crew had three projects for the day.

They were to find the source of a water leak that was flooding the property and creating a mud pit-like moat; put protective netting around one of the fortified observation towers that surround the outpost; and make a stairwell in one of the buildings so troops could go from one floor to another without going outside and being exposed to attacks.

Katz said he wished he had more engineers. Task Force 1-77 has been busy building outposts like COP Steel, hoping to secure one neighborhood at a time. Engineers are charged with making the outposts safe and functional.

Katz said that U.S. civilian engineers, such as those from KBR, don&#8217;t have the armored vehicles to leave nearby Camp Ramadi. Local Iraqi electricians, plumbers and other workers are afraid to take on any jobs, he said.