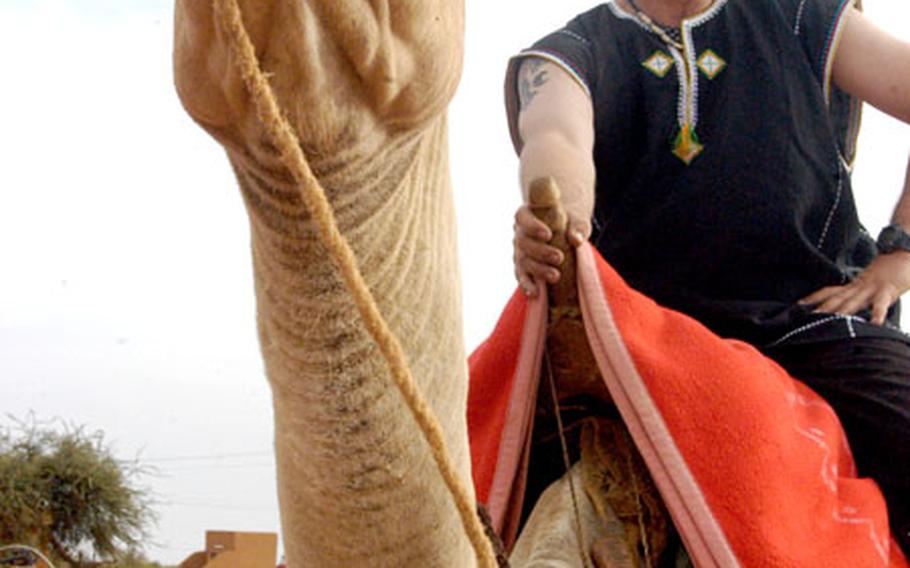 Sgt. Chris Berry of the Stuttgart, Germany-based 1st Battalion, 10th Special Forces Group dons some of the local threads as he poses on top of a camel that was brought to the military camp in Tahoua, Niger. (Charlie Coon / S&S)

Sgt. Chris Berry of the Stuttgart, Germany-based 1st Battalion, 10th Special Forces Group dons some of the local threads as he poses on top of a camel that was brought to the military camp in Tahoua, Niger. (Charlie Coon / S&S) 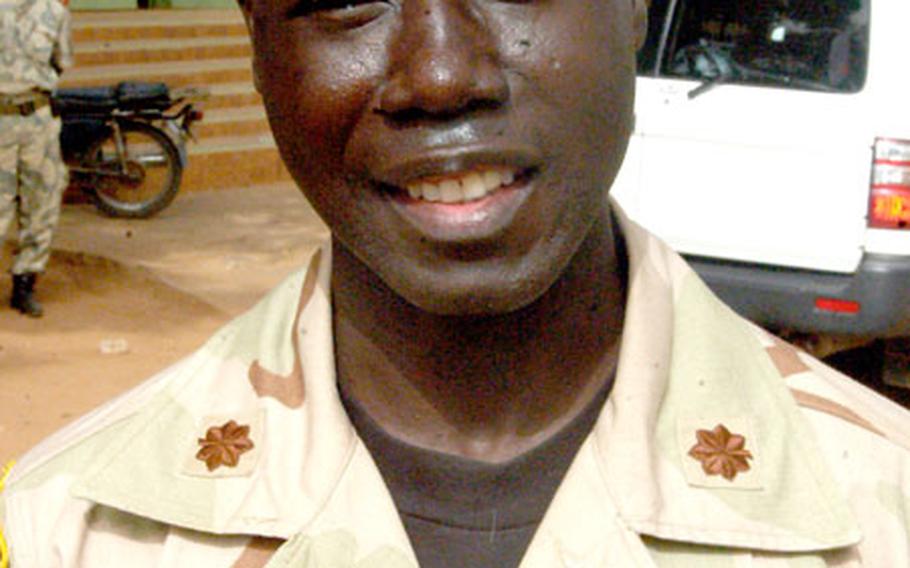 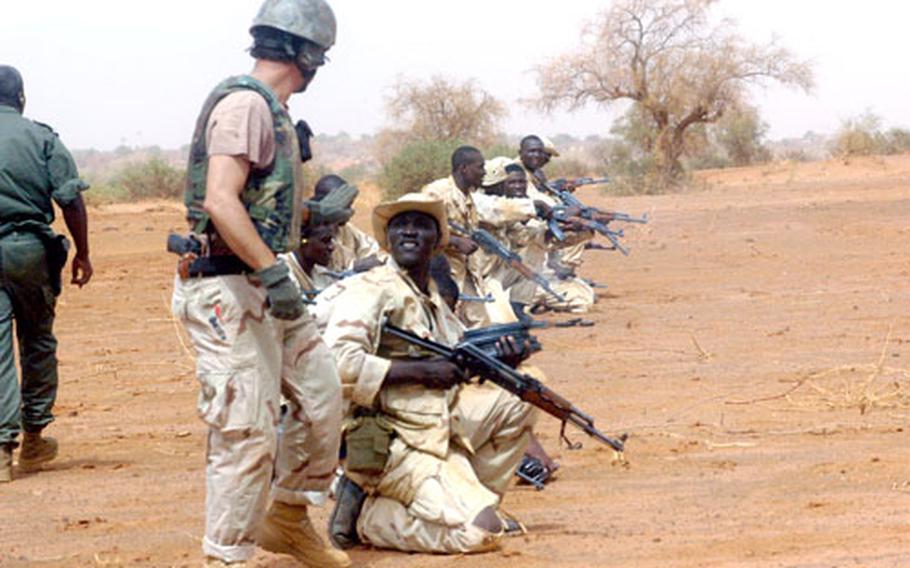 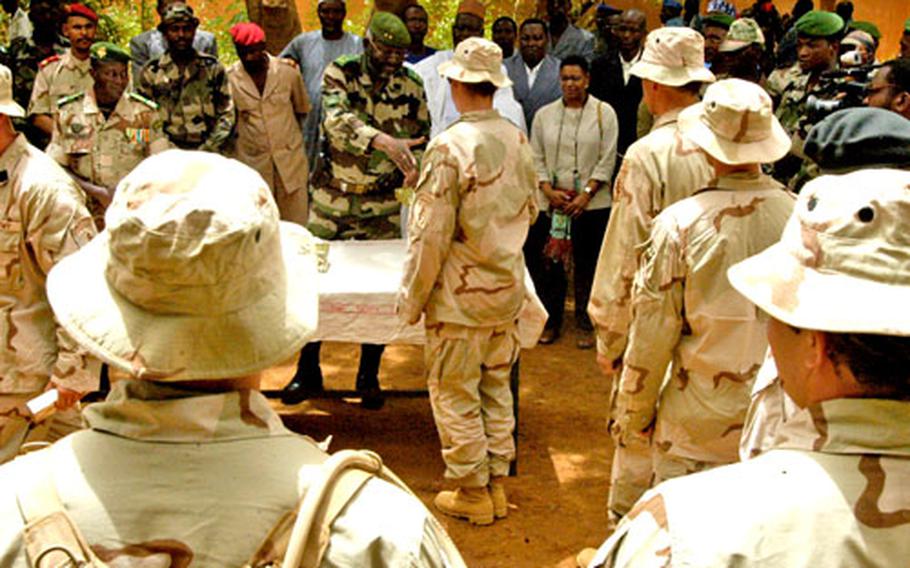 Soldiers from the 10th and 20th Special Forces Groups receive gifts on June 22 during a reception at the Nigerien army headquarters in Tahoua, Niger. (Charlie Coon / S&S) 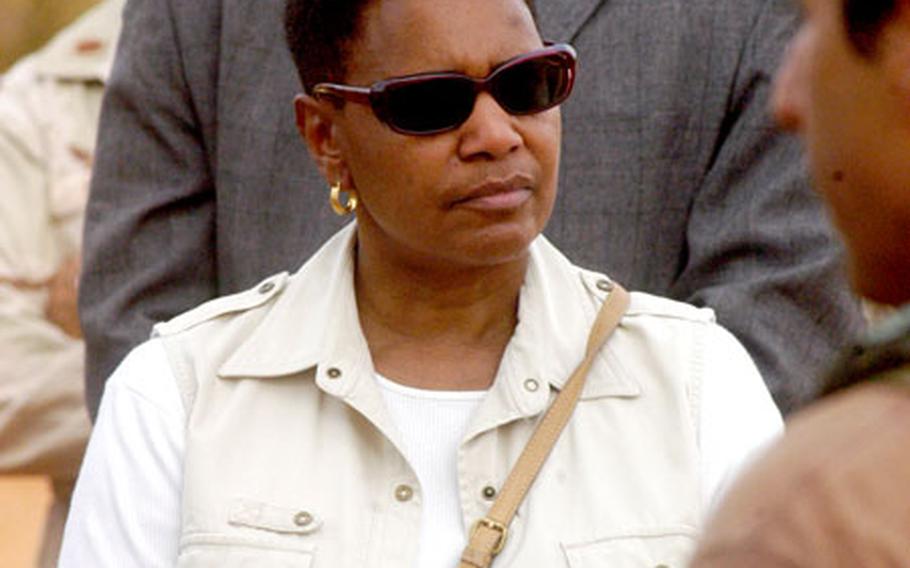 The U.S. military has restrictions on what aid it can give to nations such as Niger. Training foreign soldiers is OK. Giving their army bullets, though, is not.

The 170,000 rounds that Team Niger brought for training is more than the Nigerien troops would use in an entire year, according to Nigerien Lt. Col. Amadou Madougou Wonkoye.

So the U.S. military has to use other means to help stabilize the region, which is one of its goals in the war on terror. In a previous visit to Niger, the U.S. Marines gave four-wheel-drive trucks and radios to the Nigeriens to help them patrol the vast desert nation.

But when it comes to shooting bad guys, the Nigeriens are on their own.

Hughes said he was encouraged during his visit to a live-fire demonstration in Tahoua on June 21.

Denise Mathieu, the U.S. ambassador to Niger, said earning an alliance with nations such as Niger is important. Mathieu also traveled from the capital of Niamey to watch the live-fire demonstration, in which a company of Nigerien soldiers attacked an objective using live ammunition.

If conflict broke out in the region, Mathieu said she hoped to count on Niger&#8217;s support militarily, and also when it came time to cast votes at the United Nations.

Help from RomaniaIt helps to be able to speak French in a French-speaking nation.

The Alabama-based 20th Special Forces Group, whose soldiers are trained in Spanish, brought to Niger two Romanian soldiers who are fluent in both French and English. The Romanians, Capt. Bogdan Medintu and Staff Sgt. Mihai Bobosa, were valuable because they interpreted for both the Americans and Nigeriens during training.

Medintu said he was heartened by the warm reception he got from the locals.

Graduation giftsMilitary training in Niger concluded on June 22 with a parade of soldiers in Tahoua and a reception for the Green Berets at the zone commander&#8217;s compound.

The parade featured Nigerien soldiers and speeches by local dignitaries.

At the reception, U.S. team members were given an etched letter opener with a bone handle inside a wooden box that was inscribed &#8220;Forces Armees Nigerennes.&#8221; They also received a wooden box which was framed with 21 silver crosses, representing the 21 regions of Niger.

The menu at the ceremony included roasted goat with couscous and soft drinks.

The Nigerien soldiers were awarded diplomas from the U.S. Defense Department at a later ceremony.