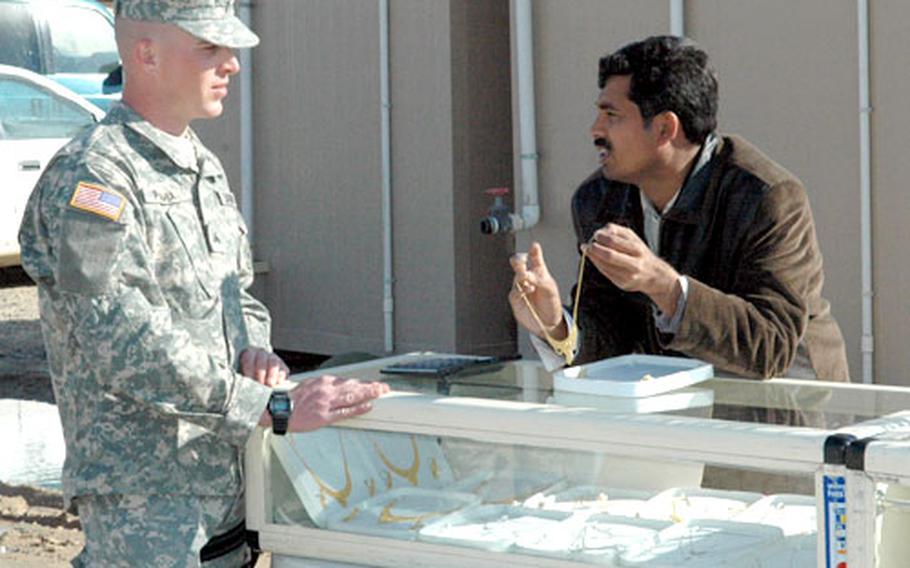 A soldier barters with a jewelry merchant at the Sunday bazaar, a regular weekend activity at Camp Buehring, Kuwait. (Andrew Tilghman / S&S)

The National Bank of Kuwait now has several ATMs scattered across the far-flung training facility, where the population of U.S. troops varies from 5,000 to more than 20,000 depending on deployment schedules.

For some soldiers, the ATM, which charges no fee, makes getting money and spending it that much easier.

Spc. Juan Perez, 22, takes out money in increments of $100, spending a lot of it on fast food, phone calls and $5-per-hour visits to the Internet cafe to keep in touch with his wife back home.

Spc. Robert Spraggins lives on a more limited budget and takes out $20 at a time, mostly for cleaning supplies at the post exchange.

Spraggins, a 26-year-old scout with the Brigade Reconnaissance Troop, is especially frugal because he is engaged and hopes to buy a house soon.

Combat pay, patchesAccording to the U.S. military, soldiers posted to Kuwait are in a war zone, where troops receive combat patches and danger pay.

But some soldiers remain unconvinced.

The Army plans to award combat patches to all troops here with the 1st Armored Division&#8217;s 2nd Brigade, despite the fact they may not set foot north of the border during this deployment.

The 2nd Brigade spent months training to go to Iraq, but arrived in Kuwait in November and learned they had a new mission: Stay and train in Kuwait and be ready to go to Iraq only if needed.

&#8220;Iraq, in their minds, is something of a testing ground. But really, any place that you are now is the test. Everyone supports the mission,&#8221; Anderson said.

Few soldiers, however, complain about the Army&#8217;s policy that grants the same combat pay to soldiers in Kuwait that it does those in Iraq.

The day of restSoldiers here in Kuwait get one major luxury their counterparts in Iraq do not: a day off.

On Sundays at Camp Buehring, most weekday routines such as the sunrise personal fitness drills, combat training programs and other business activities are suspended for the day.

Many fill their day going to church services, waiting in line for a telephone or watching movies in the barracks.

Sgt. Zac Higgins, 21, was wandering through the bazaar among a throng of other soldiers.

For some, Sunday is for video games &#8212; in particular, Halo, a fantasy game where soldiers fight against alien religious zealots trying to destroy the human race.