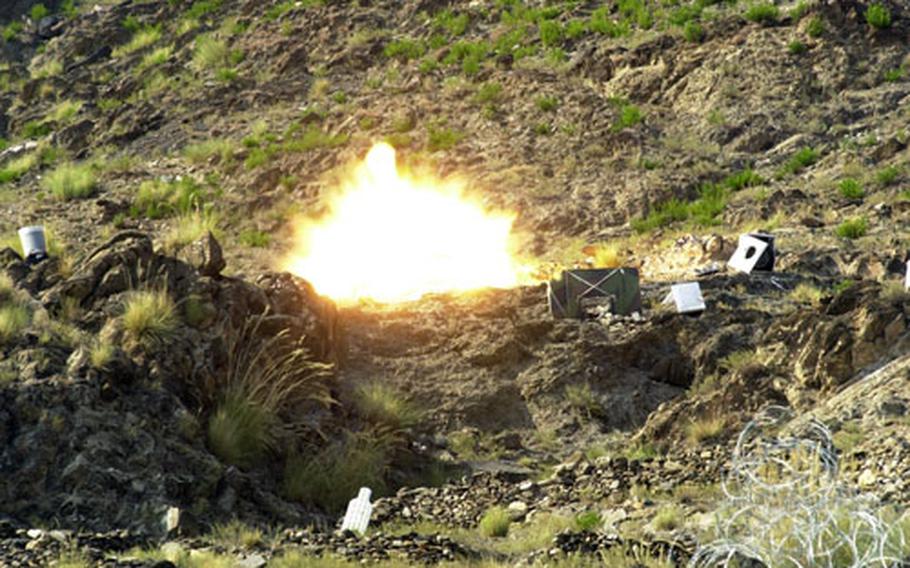 As a Marine Corps convoy headed out of Forward Operating Base Asadabad on its way to Camp Blessing in eastern Afghanistan late Monday night, Marines joked to each other about the spine-rattling ride that awaited them.

The comments were a way to pass the time with humor and keep the Marines&#8217; minds off the jarring ride ahead. Bouncing around in a highback Humvee personnel carrier, Marines joked about the recruiting commercials that depict a Marine fighting a computer-animated fire dragon and another commercial that shows a Marine climbing a rock face.

The route between Asadabad and Blessing has been fraught with enemy ambushes of late. Afghan supply trucks, better known as jingle trucks, were hit earlier in the week with enemy rocket-propelled grenades on their way to Blessing.

During the convoy briefing Monday night, leaders seemed positive that Marines would have contact with the enemy. But the convoy passed without a firefight, and all the Marines made it safely to Blessing.

However, one of the convoy&#8217;s Humvees broke down and had to be pulled to Blessing by another Humvee. The normally two-hour drive turned into a four-hour marathon.

Super-human strength would have been nice to tow the crippled Humvee and speed up the process.

On your honorA pair of Medal of Honor recipients visited Forward Operating Base Asadabad on Monday to give the Marines with Company E, 2nd Battalion, 3rd Marine Regiment, 3rd Marine Division out of Kaneohe Bay, Hawaii, a big thank-you.

John J. McGinty III and Gary L. Littrell, both of whom received the Medal of Honor for actions during the Vietnam War, spoke to troops about the mission in Afghanistan. Littrell and McGinty&#8217;s medal citations were read, and after hearing their stories, there was no doubt among the Marines why the men earned the U.S. military&#8217;s top honor.

Cpl. William Davidson, with Company E&#8217;s 1st Platoon, was the first Marine to fire the weapon Tuesday afternoon. The 22-year-old from New Summerfield, Texas, was spot on with his shot.