Reporter’s Notebook: Marines get new gear to help them beat the heat 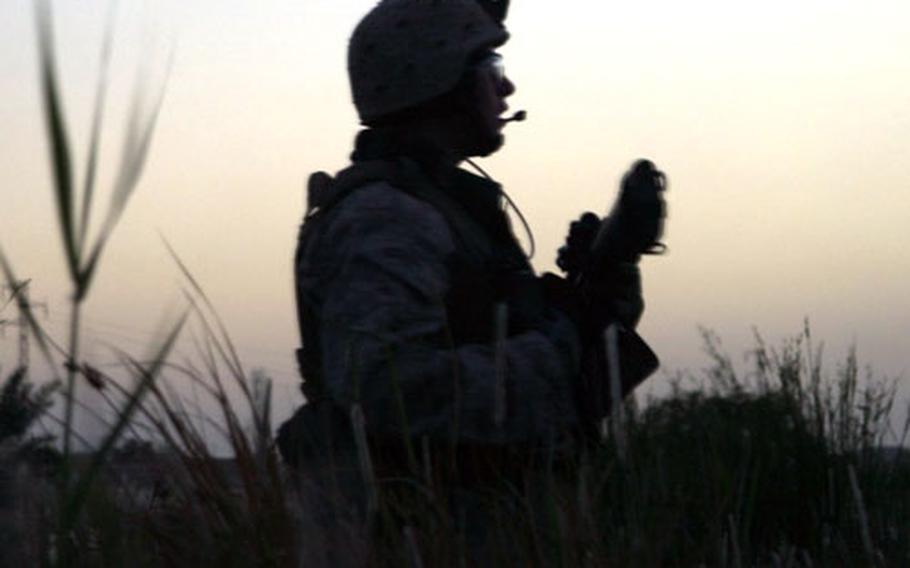 A Marine from Company L, 3rd Battalion, 5th Marines patrols in the tall reeds next to a road just outside the city of Fallujah. (Joseph Giordono / S&S)

FALLUJAH, Iraq &#8212; It looks like a brown, spongy version of chain mail. But the purpose of a new piece of gear being issued to Marines in western Iraq is more of a cooling system.

Marines have been issued &#8212; for lack of a better description &#8212; desert tan smocks that fit under their body armor and are designed to help keep air circulating under the heavy body armor and gear harnesses they wear. While some Marines swear by them, others say it&#8217;s just yet another piece of equipment to put on; wearing them is optional.

Some Marines have found dual purposes in the soft material.

His solution? Stuff them down the back of his pants, and use them as padding for the sometimes-long mission rides.

Delayed, not detainedAnyone who&#8217;s tried fly space-available travel somewhere in Iraq has gone through the hours, and sometimes days, of sitting and waiting for a spot on a flight. Whether trying to go on leave or get back from a temporary assignment, simply getting a seat can seem like winning the lottery.

But for some, waiting has its privileges.

One Marine stationed at Al Asad in western Iraq had been called down to the Green Zone to testify in the trial of a suspected insurgent he&#8217;d helped capture. He spent two days with the legal officers, testified, and then humped his gear to the helipad to get a flight back west. He ended up waiting seven days.

Radio DazeThe talk among some troops in country is something that you&#8217;d be more likely to hear at home: radio station giveaways. It seems that AFN-Iraq received a $10,000 donation from communications giant AT&T, and the command used the money to buy a passel of prizes ranging from an iPod to a 52-inch plasma television.

Over the course of a few weeks beginning June 1, the station plans to give away the prizes to servicemembers throughout Iraq by playing a radio version of the game &#8220;memory.&#8221; Each prize will be assigned a pair of numbers, and at random times, callers will be asked to jump on the DSN phone lines and try to match up the numbers and win those prizes.