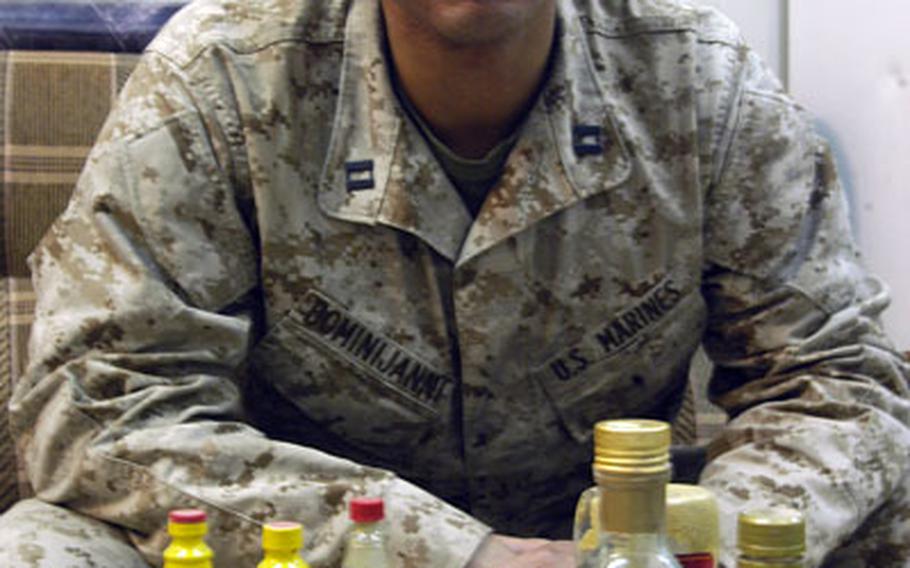 Marine Capt. Eric Dominijanni, 34, keeps a supply of sauces, spices and spreads that he says helps him stomach the food served at the chow hall food at Camp Fallujah, Iraq. As a culinary specialist, the grub doesn&#39;t always quite suit his palette. Dominijanni, the commanding officer of Company B, Assault Amphibious Battalion, now in Iraq, beat famed TV personality Bobby Flay in a televised contest last summer. (Sandra Jontz / S&S)

In a culinary manner of speaking, that is.

His victory, via a hot and tangy tender rib-eye steak marinated in a variety of spices and cinnamon, earned the Marine a chance to land his own prime-time show on the Food Network.

But he got deployed to Iraq.

Such is the life of a warrior, said Dominijanni, commanding officer of Company B, Assault Amphibious Battalion, currently operating out of Camp Fallujah, Iraq.

While he inherited the cooking talent from his Italian father, he readily admits that necessity drove him to perfect his culinary skills.

His parents divorced while he was quite young, and frankly, his mom can&#8217;t cook. No offense, he said, adding that she does prepare a mean oxtail stew.

He watched cooking shows when he was younger and through young adulthood, he said, but not to learn new tricks of the trade. &#8220;I watched them to validate my own cooking,&#8221; he said.

Estimated time of departureHumor is the operative word for Marines working the Arrival/Departure Air Control Group at Al Asad Air Base.

Responsible for tracking and processing every incoming and outgoing flight at this main air hub in Anbar Province, they&#8217;d likely lose their minds without a dose of levity, several ADACG members said.

A sign at the manifest desk captures what otherwise winds up being a frustratingly repetitious day: &#8220;Please read all available signs before you ask your question.&#8221;

The Marines strike an equilibrium between instilling patience in the travelers and keeping it themselves, said officer-in-charge, 2nd Lt. Kim Bonafede.

But Bonafede&#8217;s Marines&#8217; jobs extend beyond dealing with people. They also receive and load all cargo that comes in and out of the air hub in western Iraq.

The airstrip gets pretty hectic when crews are working to offload one aircraft &#8212; or several &#8212; and load up others, said Lance Cpl. Ryan Small.

Crews work to get helos off-loaded and re-loaded and back in the air within 30 minutes, and fixed-wing aircraft within an hour, Bonefede said. The track record is in the high 90 percentile.