Reporter's Notebook: Mail's finally in, but fresh doughnuts are out 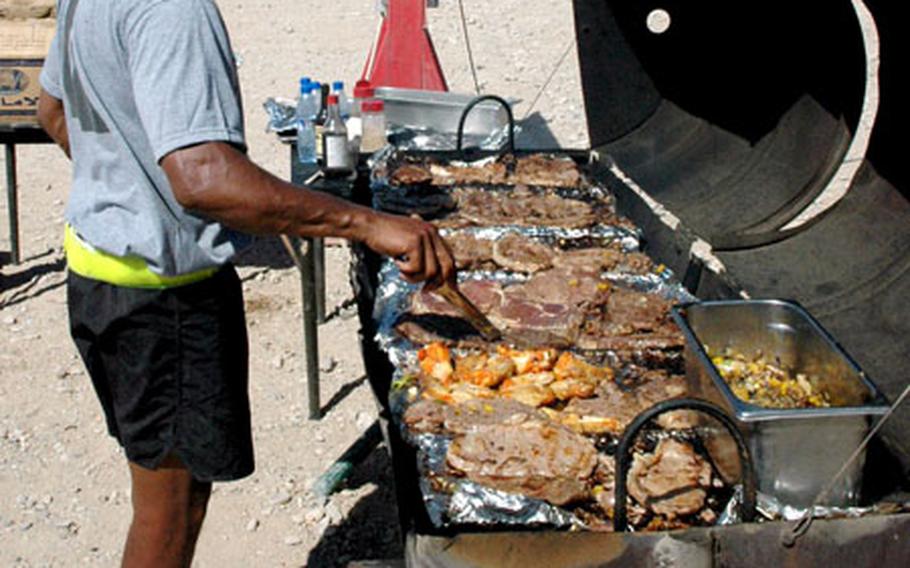 Sgt. 1st Class Robert Cordell of the 330th Movement Control Battalion flips some steaks during a cookout Sunday for members of the Surface Deployment and Distribution Command at Kandahar Airfield in Afghanistan. The barbecue was a thank you to the troops for their recent work. (Leo Shane III / S&S)

KANDAHAR AIRFIELD, Afghanistan &#8212; The good news on Sunday was that the mail finally arrived. The bad news was that the doughnuts still hadn&#8217;t.

Swirling winds and hazy conditions have complicated air travel into this southern air base this week, forcing some cargo flights to delay their deliveries for several days. Mail flights had taken off several times this week, only to be turned around by the poor flying conditions. But more than a dozen pallets of mail came on Sunday morning, uniting troops with letters from home.

Canada&#8217;s Global National Television first reported on Friday that the Kandahar branch of Tim Hortons, the popular northern fast-food chain known for its coffee and breakfast treats, had run out of doughnuts because of the supply issues.

That left troops with a sweet tooth with only muffins and sugary bagel spreads to satisfy their needs. That and any of the dozens of candy bars over at the post exchange.

Kandahar cook-outSummer means barbecues, even in the 112-degree heat of the Afghan desert.

&#8220;It&#8217;s just like being outside back home,&#8221; said Sgt. 1st Class Robert Cordell of the 330th Movement Control Battalion, who spent the hottest part of the afternoon grilling steaks and hot dogs for co-workers at the airfield&#8217;s Surface Deployment and Distribution Command.

Members of his unit and the 831st Transportation Battalion put together the Sunday afternoon cookout as a welcome to several colonels visiting the base and as a thank you to the command workers for their efforts in recent weeks.

Several troops petitioned the dining facility managers for the case of steaks, while others managed to find a beat-up old grill to cook the steaks on.

Cordell said he volunteered for duty standing over the open fire in the direct sun to help out his unit, but also to make sure his grill-master skills hadn&#8217;t deteriorated too much since leaving home in Virginia several months ago.

Phone homeAll Spc. Victor Andrade wanted to do was talk with his wife for a few minutes. But the phone lines weren&#8217;t cooperating.

Of the four lines available at FOB Lagman&#8217;s recreation center, only one was clear enough for conversations on Wednesday night. Two others only delivered busy signals. The fourth sometimes connected, but the person back home heard mostly static.

Andrade, a member of the 2nd Battalion, 4th Infantry Regiment&#8217;s Company A, said he had been moving from base to base over the last few weeks and rarely had a chance to call his wife.

Since she&#8217;s almost due with their first child, he wanted to check and see how she&#8217;s feeling. So he was willing to wait for the one working phone, even if the four people ahead took their full 20 minutes of alloted phone time.

He worked with one of the broken phones for about 15 minutes before giving up and heading over to the other end of the building, settling for the line waiting for computers and the much more reliable Internet access.

Everyone else in line took turns switching handsets, unhooking wires and trying to dial before inevitably giving up. Some understood the technical problems of placing a call from 8,000-plus miles away.

When Andrade got his chance, his call lasted less than five minutes.

He decided to hang around the room a little longer, and see if maybe the connection would get better later on.