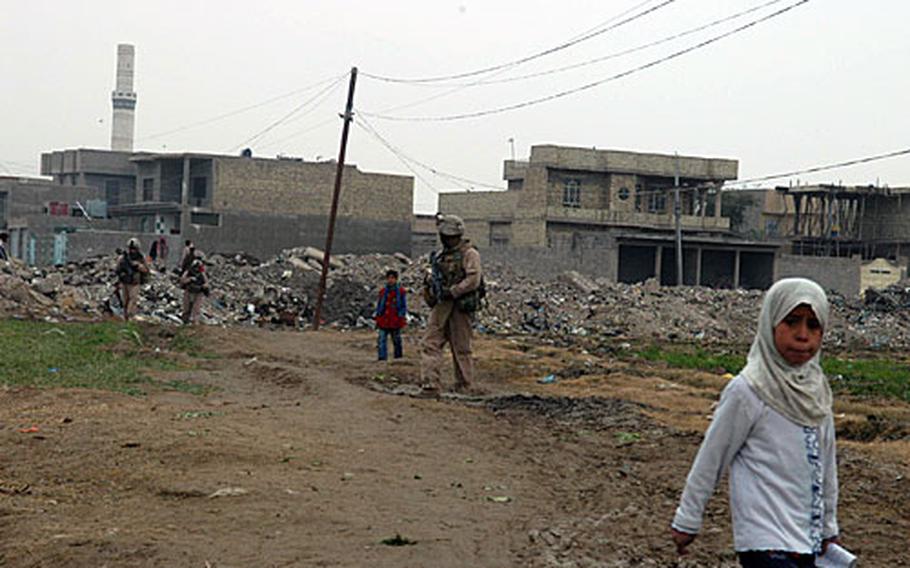 FALLUJAH, Iraq &#8212; The Marines of Company L, 3rd Battalion, 3rd Marines, have spent their deployment at OP Delta, a Spartan base about a 10-minute drive from Camp Fallujah.

The men are kept company all day every day by the constant rumbling of the generators. One Marine said they ate the same chicken alfredo chow a month straight for dinner.

Supplies are sometimes slow to come through. But while the base was low last week on things like juice, there was plenty of banana-flavored milk to go around, which most Marines said they weren&#8217;t too fond of.

But the Marines get to occasionally head back to Camp Fallujah for a haircut, training and other needs, and a PX truck occasionally rumbles onto base filled with stuff for them to buy.

Then there&#8217;s the &#8220;wag bags,&#8221; the only way to ... well, you know ... at the base. A Marine will take out a bag filled with something resembling kitty litter and fit it around the plastic molding of a toilet seat. He does his business and then seals it up in another bag before throwing it away. The packs come with a baby wipe and toilet paper as well.

The base has hot showers, but in such a low-frills environment, sergeants have to keep on the younger Marines when it comes to hygiene and other issues, Gunnery Sgt. Thomas Fish said.

Setting the Ali Baba record straightThe following conversation between two Iraqi interpreters and a young Navy corpsman took place while waiting for a flight to Iraq from Ramstein Air Base, Germany:

Waiting is the hardest partAt Camp Fallujah, most Marines with Regimental Combat Team 6 are nearing the end of their deployment, a time of anticipation that exceeds even that Christmas Eve excitement of youth.

But Marines here differ on how closely they count the days until they&#8217;re out of here, with some saying they keep a strict tab while others ballpark it.

Sgt. Jamie Oaks, a Torrington, Wyo., native, said she keeps a vague estimate in her head when leaving is a month or so out.

Aside from family, Oaks said she&#8217;s most looking forward to just hanging out and wearing different clothes.