Reporter's notebook: Learning to 'roll with the punches' in Africa 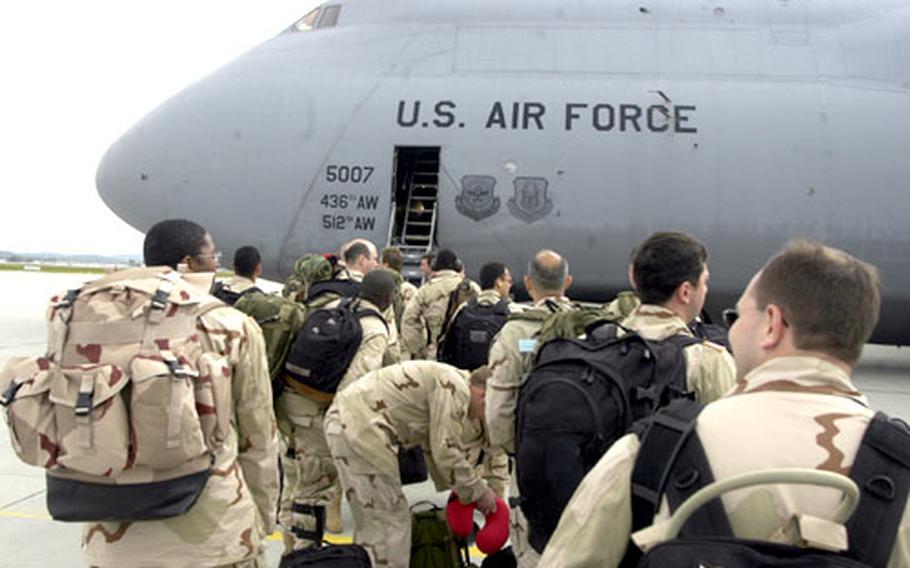 Soldiers from 1st Battalion, 10th Special Forces Group and other units board a plane Monday morning at the Stuttgart, Germany, airport on the way to Niger as part of Flintlock 05, a seven-nation exercise to strenghten African armies and U.S.-African ties. (Charlie Coon / S&S)

Soldiers from 1st Battalion, 10th Special Forces Group and other units board a plane Monday morning at the Stuttgart, Germany, airport on the way to Niger as part of Flintlock 05, a seven-nation exercise to strenghten African armies and U.S.-African ties. (Charlie Coon / S&S) A soldier heaves a roll of concertina wire onto a truck Wednesday in Niamey, Niger. The troops were forced to load trucks by hand after the airport’s forklift was unable to lift the pallets of cargo. (Charlie Coon / S&S) 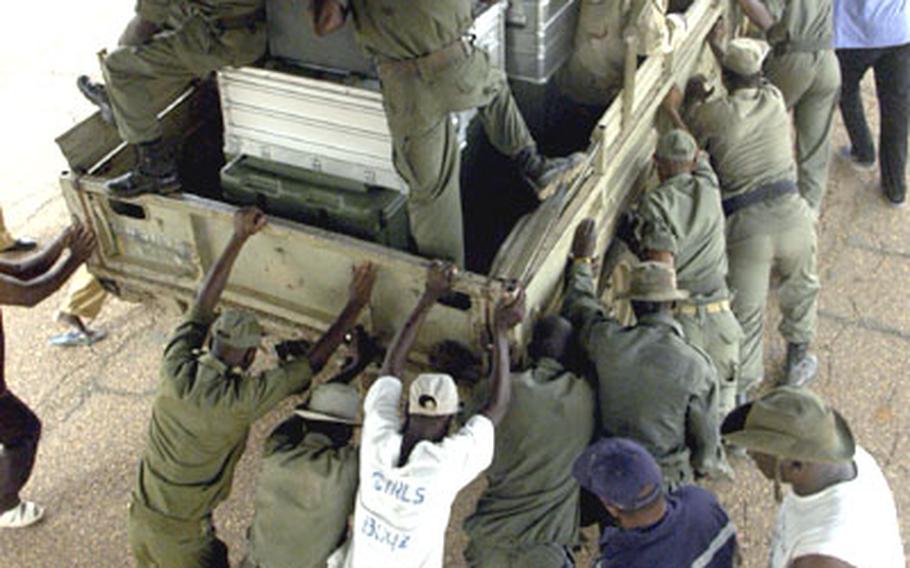 Mali soldiers push-start their truck Monday at a Goa, Mali, airfield after it was loaded with supplies from the U.S. Army for Flintlock 05. The exercise is designed to train armies from seven African nations on marksmanship, patrolling borders and other skills. (Charlie Coon / S&S)

NIAMEY, Niger &#8212; One truck needed a pop-the-clutch push start. The forklifts at the African airports were too wimpy to lift the pallets. Another truck, laden with ammo and other heavy things, broke down on its way out the airport gate.

Flintlock 05, in which some 1,000 U.S. troops have deployed to northern Africa to train African troops and build relationships, got off to a slow start this week for Team Niger.

Moving everything needed to live and work for one month from Germany to rural northern Africa, with limited support, is a mammoth job. The plans on paper often don&#8217;t match the reality on the ground. After a lot of sweat, all of the chow, gear and weaponry finally made it to its destination late Wednesday night.

The team began by playing wait-and-see with military air. A U.S. Air Force C-5 was eventually procured to lift the soldiers Tuesday from Stuttgart to Niamey, the Nigerien capital.

During a stopover Tuesday night at a remote Mali airstrip, the plane&#8217;s back hatch broke, causing a four-hour delay. As they waited, a sandstorm forced the soldiers to retreat from the tarmac into the plane. The air conditioning was turned off in the passenger section, so the cramped area soon took on a locker-room aroma.

But the hatch got fixed and the journey continued.

Upon arrival in Niamey at 3:30 a.m. Tuesday, it was discovered that the airport&#8217;s forklifts couldn&#8217;t handle the heavy cargo. So American and Nigerien soldiers broke down 13 pallets by hand and loaded everything onto the awaiting trucks. They finished at 6:30 a.m. as the sun was coming up, nearly 20 hours after they&#8217;d left Stuttgart.

After a busy day with minimal sleep, the soldiers awoke in the wee hours Thursday to convoy to a base in the remote sub-Sahara. From there, the predicted 10- to 12-hour convoy to transport the Special Forces, civil affairs and medical soldiers and their cargo took 15 hours, thanks in part to two breakdowns by a Nigerien police motorcycle used as an escort.

More than men in uniforms with guns

Garbage in the streets? Not the best way for a city to put on its best face. Niamey, which in December hosts a big soccer tournament for French-speaking African nations, might have a garbage problem or might not. A team from the Fort Bragg, N.C.-based 96th Civil Affairs Battalion, was going to find out.

After the rest of Team Niger left for its mission in another part of the country, Davis&#8217; team stayed behind in Niamey to help in the capital. He sounded gratified to do the job.

About 95 percent of Niger&#8217;s 11.3 million people are Muslim, according to the U.S. State Department. But they are welcoming of non-Muslims, according to Air Force Master Sgt. Roy Watson, the operations coordinator for the Defense Department attache&#8217;s office in Niamey.