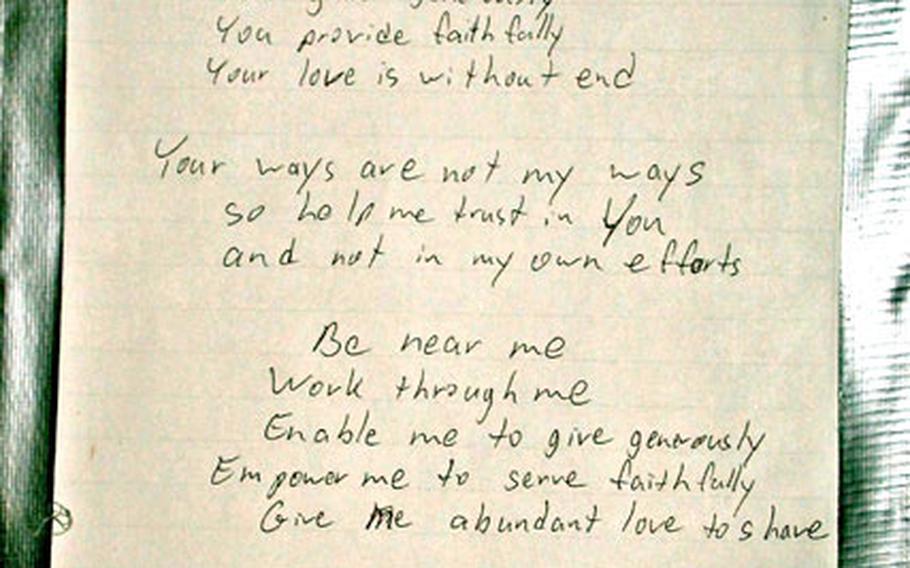 An anonymous rescue worker taped this prayer to the “red” tent in the triage area at the airport. to see a larger version of the photo. (Lisa Burgess / S&S)

An anonymous rescue worker taped this prayer to the “red” tent in the triage area at the airport. to see a larger version of the photo. (Lisa Burgess / S&S) 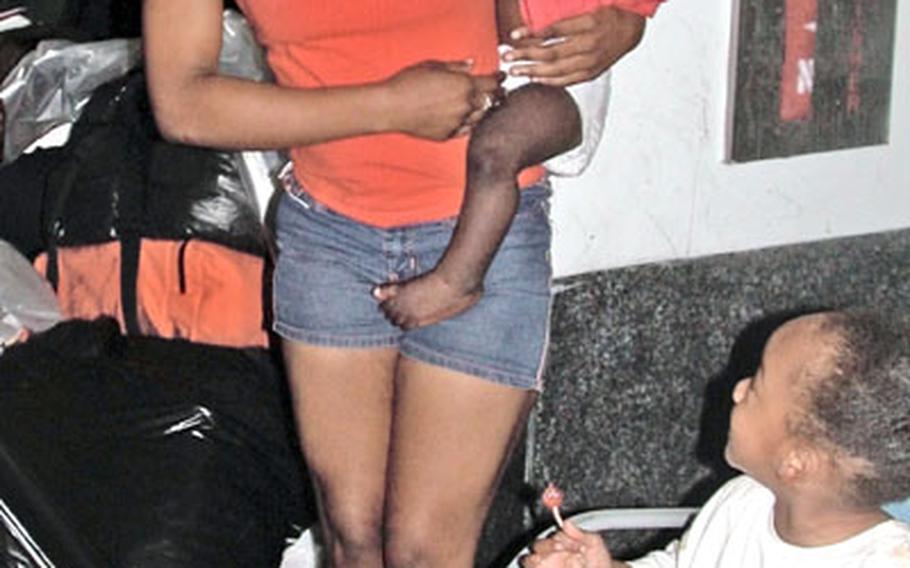 Romona De Angelo holds her baby son D’Angelo De Angelo as she tries to gather together food left Sunday by storm victims who had already departed the airport. Dominic Thornabar, right, struggled through his difficult journey despite the cast on his leg. (Lisa Burgess / S&S)

With tens of thousands of people clamoring for evacuation flights at the airport, a waiting period that stretched beyond 12 hours, and persistent (untrue) rumors that the flights would soon stop, evacuees began using desperate tactics to get to the front of the line.

Claiming illness was the most popular deception, with &#8220;I&#8217;m having chest pain&#8221; a crowd favorite, according to a military medic working triage.

But only one young man was driven to try suicide as a gambit.

What the would-be suicide didn&#8217;t know, the medic said, is that with personnel overwhelmed with those who were truly dying, &#8220;he most likely would get stitched up and sent back to the line.&#8221;

Puppy love and prayerThe stress was both physical and mental for relief workers struggling to bring order out of chaos in the triage area at the Louis Armstrong New Orleans airport last week. People coped with the unrelenting misery in different ways.

&#8220;I ducked outside to the loading dock and had my little cry,&#8221; a Secret Service agent assigned to VIP protection said Monday.

For others, it was prayer, like the unknown person who had taped a Psalm to the outside of the &#8220;red&#8221; tent, where terminal cases were brought to die.

Dogs who had become separated from their owners were a source of delight &#8212; like William, the name the logistics area organizers bestowed on a fuzzy dachshund puppy.

Finally, professional assistance also was available for the overwhelmed.

An Air Force chaplain was overheard in the wee hours of Sunday telling a distraught young airman, &#8220;But you are bringing these people hope.&#8221;

No high in the skyOne of the critical tasks given to military police and other lawmakers at the New Orleans airport was collecting dangerous or illegal contraband from evacuees waiting to board outbound flights.

According to a military K-9 unit member, who asked not to be named, in one 24-hour period over the weekend, the collection included:

About 100 handgunsEnough knives and switchblades to fill several large plastic binsNine semi-automatic weaponsOne half-ounce baggie of marijuana (&#8220;He just tossed it in the &#8216;amnesty&#8217; bin.&#8221;)A world of hurtLosing your house is a tragedy. Being separated from your only son and principal caretaker is another. Terminal colon cancer? Same thing.

Dorothy Bonnet was coping with all of the above.

Lying on a litter on the floor of Terminal B in New Orleans airport Saturday, oxygen tank beside her, Dorothy Bonnet struggled to keep her worry in check as she moved through the slow medical evacuation process.

Michael Bonnet did not abandon his sick mother.

The couple were separated after rescue workers stopped allowing families to accompany the sick and injured to the air medical evacuation center &#8212; in New Orleans, &#8220;family&#8221; typically includes three generations, including cousins, aunts and uncles, and the center had nowhere to put the overflow.

Dorothy had not lost her sense of humor.

Tale from the floodThe five members of the Bennett-De Angelo family, including 7-month-old D&#8217;Angelo, spent two days after Hurricane Katrina huddled on top of furniture in their kitchen, watching the floodwaters rise.

&#8220;I sat on a chair on the kitchen table,&#8221; Romona De Angelo said Sunday. She was holding her baby as the little group filled Hefty bags with food and clothing foraged around the New Orleans airport.

With table space at a premium, &#8220;Little Jeffrey&#8221; Steward, who is 8 and slender, climbed on top of the wardrobe, where he wedged into the two-foot space between the furniture and the ceiling as the child gulped bottle after bottle of milk, she said.

Rescuers dropped the family off at an elementary school, which was dry, but also low on food and water.