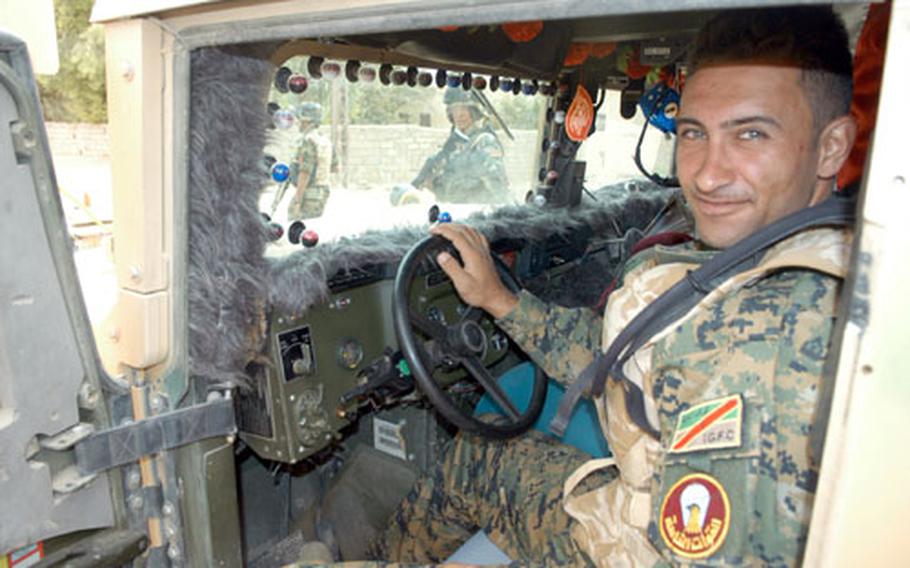 An Iraqi soldier shows off the inside of his Humvee, lined with sheep fur and other trinkets. (Photos by Sean Kimmons/S&S)

BAQOUBA, Iraq &#8212; Pimped-out vehicles typically mean alloy rims, a killer paint job, tinted windows and a bumping stereo system that has everyone on the block turning their heads in amazement and envy.

Iraqi soldiers with the 1st Brigade, 1st Iraqi Army Division have a different fashion sense, one that has sometimes left U.S. Marine Corps military transition teams attached to the unit scratching their heads.

Wright once even saw Iraqi soldiers use stickers from bananas to decorate humvees.

But would the Marines borrow these style tips from the Iraqis?

"Hell, no," Wright said promptly. "I could only imagine if our battalion commander caught us with that crap."

Downtime can bring boredom to any U.S. servicemember in Iraq, so Marines in Diyala province used their ingenuity to combat it with a homemade game.

The game is called "Jundi-shoes," named after the Arabic word for soldier. It&#8217;s basically a war zone take on the traditional pastime of horseshoes. But with no horses, or horseshoes, in the area, the Marines used empty Meals Ready to Eat boxes and water bottles.

Two boxes are spread apart at an undetermined distance, with two players on each side. A handful of dirt or sand is placed into the empty water bottles to give them some weight.

Without crossing over a line, a player tosses two bottles toward the opposite box. A bottle landing inside the box is worth three points; touching the outside of the box is worth two points; and hitting the box is worth one point. The first team to 21 points wins. However, if they go over 21, they go back to 15 points.

Small crowds of curious Iraqi soldiers often converge when the game is being played, and sometimes they join in.

Marines teasingly hope the game will eliminate sectarian strife in the country.

"We&#8217;d like to bring Sunnis and Shiites to play together," said 1st Lt. Josh Noxon, 24, of Gibsonville, N.C. "We were trying to find a sport that could unify the whole country."

Noxon and 1st Lt. Michael Phillips, 24, of Perry, N.Y., brainstormed with each other and invented the game last week.

Besides bragging rights, the MVP of a recent tournament was awarded a beefsteak MRE, a coveted prize to any U.S. troop operating far from a dining facility.