Reporter's notebook: In Niger, surgical team is there when heat-related 'stuff' happens 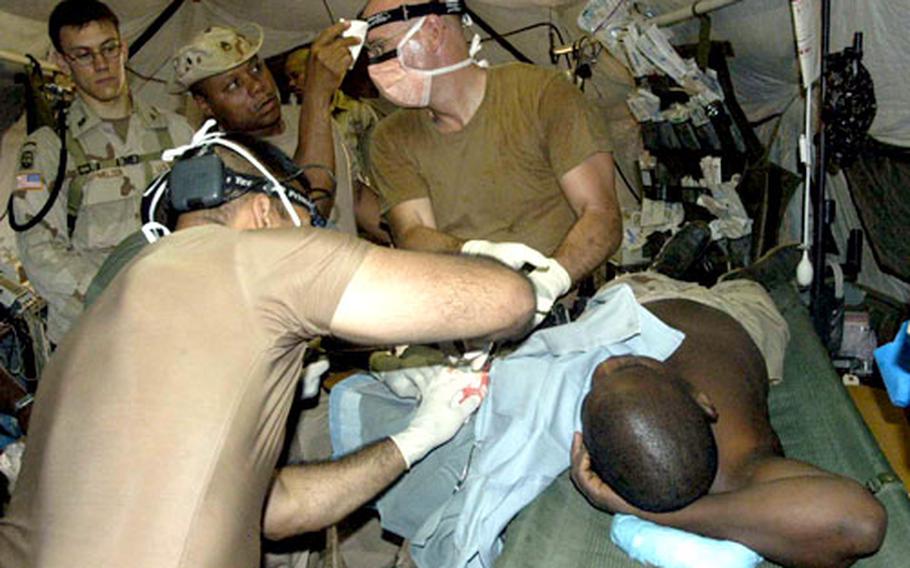 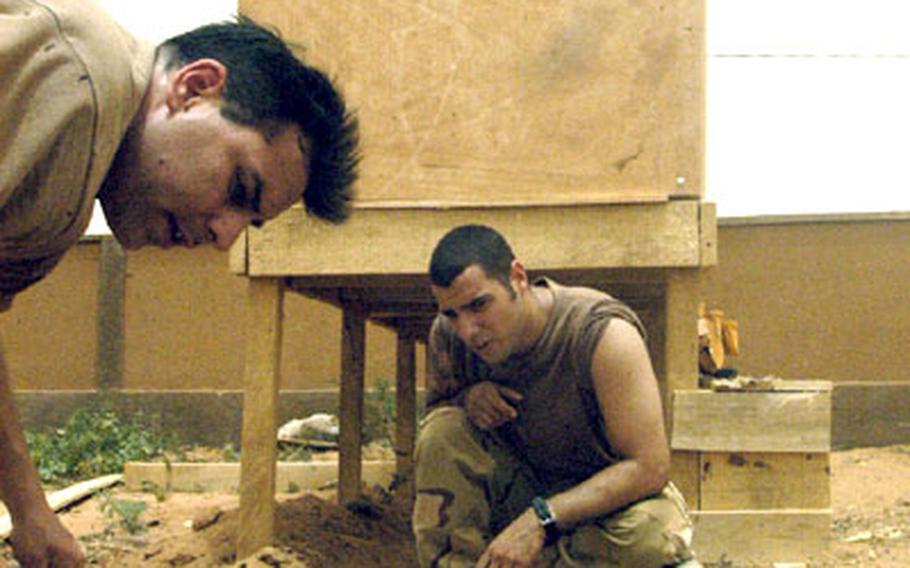 Applying the rule that you-know-what runs downhill, Spcs. Aaron Alpuche and Ruben Gomez of Team Niger line up the drain pipe for the new toilets they helped build at their camp in Tahoua, Niger. (Charlie Coon / S&S)

That&#8217;s one reason soldiers from the 160th Forward Surgical Team were brought to Niger for Flintlock 05.

There might still be dust from Iraq on their medical tent, one said, because that stuff is hard to get out. But inside it&#8217;s nearly as clean as a hospital. One week into their mission in Niger, the doctors and medics of the 160th FST had treated three cases of heat- or food-related misfortune.

Flintlock 05 is a monthlong training exercise for the armies of five African countries focusing on terrorist activity.

Depending on whose watch-thermometer you believe, it was either 124 degrees or 129 degrees Monday on the dusty practice range outside of town. Wednesday was just as hot as the troops worked on combat skills.

In Tahoua, the medical tent isn&#8217;t only for American patients. One Nigerien soldier fell off his motorcycle and cut his ear. Another suffering from stomach pain was treated.

They gave Sgt. Maj. Abdoulaye Ahamat a shot to numb the arm, cut it open, dug underneath the growth and snipped it loose from its stalk. Dye said they then removed the growth, checked for bleeding and sewed him up, finishing the job with a dressing over the stitches.

The pavilion is a three-seat flush toilet. It was named after Pappy Jones, the baseball cap-wearing, pipe-smoking instructor at Special Forces qualifying school in Fort Bragg, N.C.

&#8220;Everybody who came through the Q-school engineering course knows Pappy,&#8221; said Billy, a sergeant first class with the Alabama-based 20th Special Forces Group who, like most Special Forces soldiers, asks that his full name not be used.

The soldiers bought from local merchants about $1,200 in boards, PCV pipe and toilets. They then spent parts of three hot days sawing boards, pounding nails and digging a trench. The soldiers, from the 20th SFG, 418th Civil Affairs Battalion and 66th Military Intelligence, applied the finishing touches when they hooked up the pipes and attached the thrones.

Upon arriving in Tahoua late Thursday night, the team discovered there were no johns, just a 6-inch hole in the ground where one once stood. After several days of assuming the camel spider position, they can now relieve themselves in porcelain comfort.

Note to Pappy: They forgot the toilet brushes. Oy!

At the southern edge of the Sahara desert, what few plants that grow are literally tough as nails.

In less than one week in Tahoua, the vehicles being used by Team Niger have had 17 flat tires, according to Sgt. Chris Berry, a mechanic with 1st Battalion, 10th Special Forces Group. The problem is thorns.

Team Niger has rented a small fleet of Toyota Landcruisers and pickup trucks and both types of vehicles have had issues. The Landcruisers use tires with tubes (fast-leaking), while the pickups are tubeless (slow-leaking).

Luckily, Berry found a shop in town where the flats can be fixed for 1,000 CFA francs (about $2) each.

In addition, the mechanic said that when Nigerien autos break down, they tend to get stop-gap measures instead of real fixes. For example, when a fuse blows, the Nigeriens choose to bypass the fuse by wrapping it with a strand of metal instead of replacing the fuse.