Reporter's Notebook: Hockey in the sandbox at Camp Warhorse 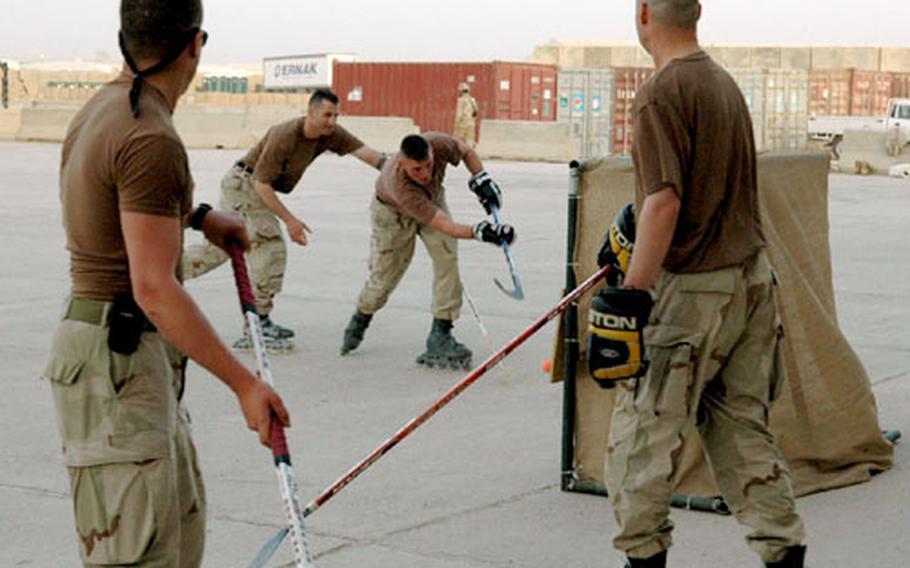 Soldiers at Camp Warhorse have started pick-up street hockey games as a way to relax when off duty. (Andrew Tilghman / S&S)

Soldiers at Camp Warhorse have started pick-up street hockey games as a way to relax when off duty. (Andrew Tilghman / S&S) 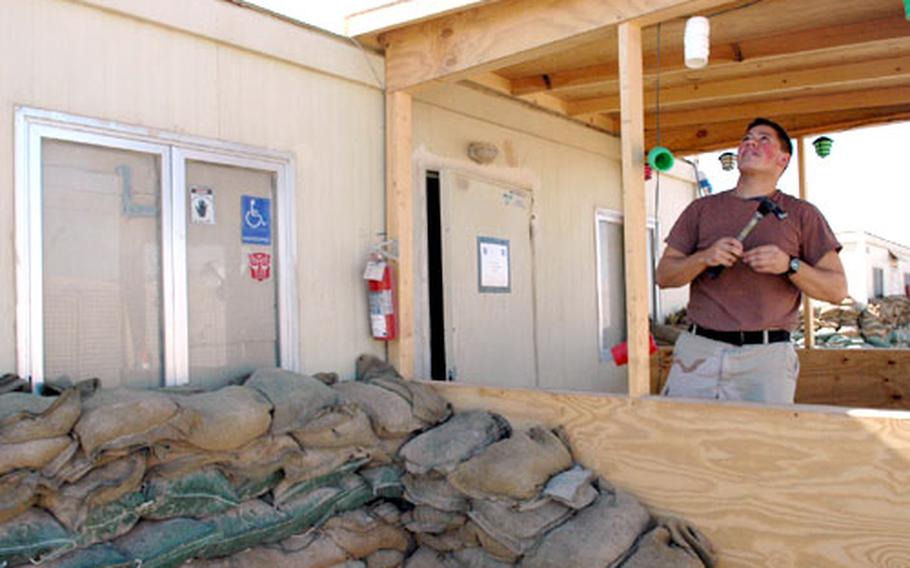 Sgt. Kevin Wigger of Fruitport, Mich., shows off the porch he built as an addition to his living trailer on Camp Warhorse. (Andrew Tilghman / S&S)

Actually, a handful of soldiers at Camp Warhorse have been playing hockey for months, since a pick-up game evolved into a daily ritual here on a stretch of concrete next to the base helipad.

They&#8217;re out nearly every afternoon on roller blades, firing an orange street-hockey ball at a homemade goal constructed of steel pipes and solar shade netting.

After hearing about the die-hard hockey fans stationed here in Iraq, the National Hockey League donated professional goalie equipment and gloves for the players, which they received in September.

Most of the soldiers are with the 203rd Forward Support Battalion from Fort Benning, Ga.

Sgt. Thomas Miller of Carmi, Ill., said he was never much of a hockey player as a teen, but has become a regular player since coming to Iraq.

Customized trailersUnsatisfied with plain old containerized housing trailers, some soldiers at Camp Warhorse have started renovations on their temporary homes.

Among the most popular things troops like to customize are porches.

Wigger was outside enjoying a sunny November day in Iraq, adding decorative lighting to his porch. He also plans to screen in the roughly four-foot square area with Army-issue netting.

Several others have built similar porches, using wood and other supplies from nearby construction sites on the base.

&#8220;My roommate comes out here to smoke,&#8221; said Wigger, a track vehicle mechanic with the 3rd Infantry Division.

Inside the trailer that he shares with another sergeant, Wigger built divider walls and a desk.

Though he enjoys the new construction, he also concedes that the project was designed in part simply to keep him busy.

Gun lawsGetting a gun permit in Diyala province could soon be as easy as getting one in the United States.

Council leaders in Khalis Kadah last week were eager to know the latest on plans to issue personal weapons permits. Under the former Coalition Provisional Authority, each family was limited to a single AK-47, which had to be kept at home. Carrying a weapon in a car or on the street required a special permit and was largely limited to government and law enforcement officials.

Although Kalishnikovs can be purchased for as little as $20, local security forces at the ubiquitous roadside checkpoints can confiscate those weapons from Iraqis without permits.

But Maj. Will Johnson, commander of local U.S. forces in the area, told local officials they are now free to draw up their own rules for weapons permits.

&#8220;The province has the authority to produce their own weapon cards. Right now, they need to step up to establish their own system,&#8221; Johnson told local officials. &#8220;It is within your authority to do this.&#8221;

The council leader listened to the major and furrowed his brow as though confused.

&#8220;The council can even go so far as to charge a small fee and use this money for other services. I would encourage the council to do this,&#8221; Johnson said.