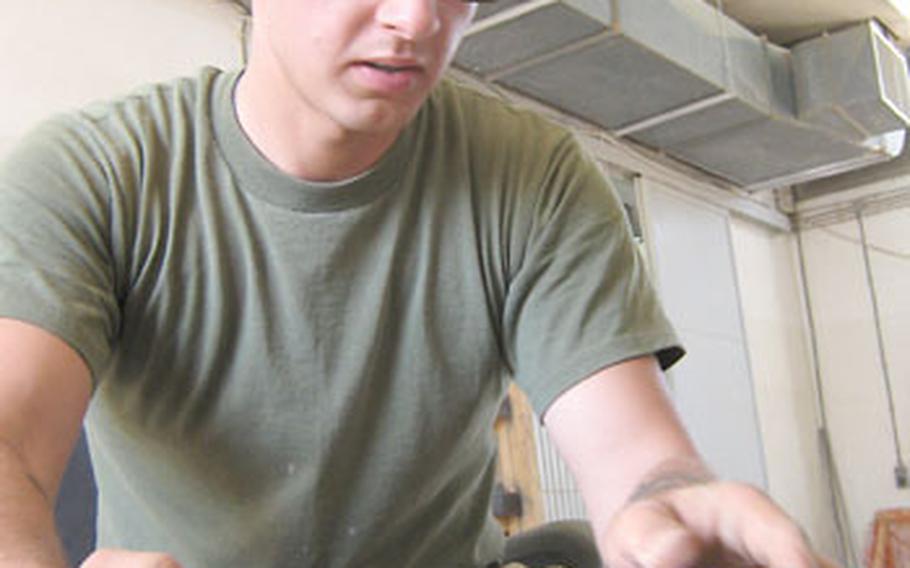 Cpl. Cezary Swirydziuk, 23, an electrical equipment specialist from Chicago, replaces a part in a generator last month at the utilities section of Engineer Operations Company, Marine Wing Support Squadron 172 at Al Asad Air Base in Anbar province, Iraq. The squadron is based on Okinawa and deployed to Iraq in the spring. (Cindy Fisher/S&S)

AL ASAD, Iraq &#8212; An electrical equipment specialist with the Okinawa-based Marine Wing Support Squadron 172 has been a one-man show of sorts during his Iraq tour &#8212; a one-man show that&#8217;s needed some adjustments.

"They use a different color-coding system for wiring," Cpl. Cezary Swirydziuk, 23, said of the Iraqi electrical system at Al Asad Air Base in Anbar province.

Swirydziuk&#8217;s responsibilities include maintaining all the generators used by the squadrons on the flight line. And when a generator goes down, he said, everyone seems to know his name. He is the only electrical equipment mechanic in the camp.

"Everyone relying on you to get the generators running" can be trying, he said.

"I believe their generators are haunted," the Chicago native said. "It&#8217;s impossible to keep them running."

Personnel with that squadron tell him that sometimes the generators turn on and off by themselves, he said. He does have some advice for all those with generators at the flight line.

"If something goes wrong with your generator, don&#8217;t touch it," Swirydziuk said of folks trying to fix the equipment themselves.

"They think they are helping," but it makes it harder for him to troubleshoot the original problem, he said.

And keeping the generators running is hard enough.

"If you add up all the parts I&#8217;ve replaced in some generators, it&#8217;s probably more than the generator itself cost," he said.

Cpl. Jeff Parks, 23, has big plans for when he gets out of the Marine Corps.

He already bought a house in his hometown of Pisgah, Ohio. And he had plans to start college in the fall, majoring in child development and minoring in food preparation.

Yes, he was all set for life after his Marine career. His enlistment was to end in September, and by August, he would have been on terminal leave, he said.

But he put those plans on hold, extending his contract by four months to be with his comrades of Marine Wing Support Squadron 172 when the unit deployed in the spring.

"They asked who wanted to go," so he volunteered, he recounted.

His mom wasn&#8217;t happy at first, but eventually she understood that he had to do it, he said.

"Every parent doesn&#8217;t want their child out here, but she understood that I&#8217;ve been with these guys so long."

Different includes mentally challenging, he said, especially as "everybody is just ready for me to come home." But he believes his decision to stick out the deployment will help him in the future.