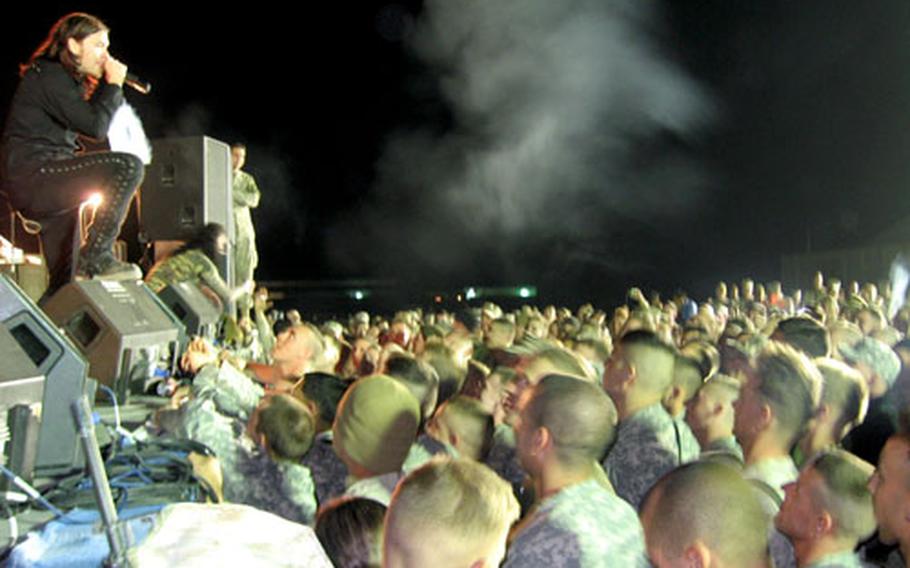 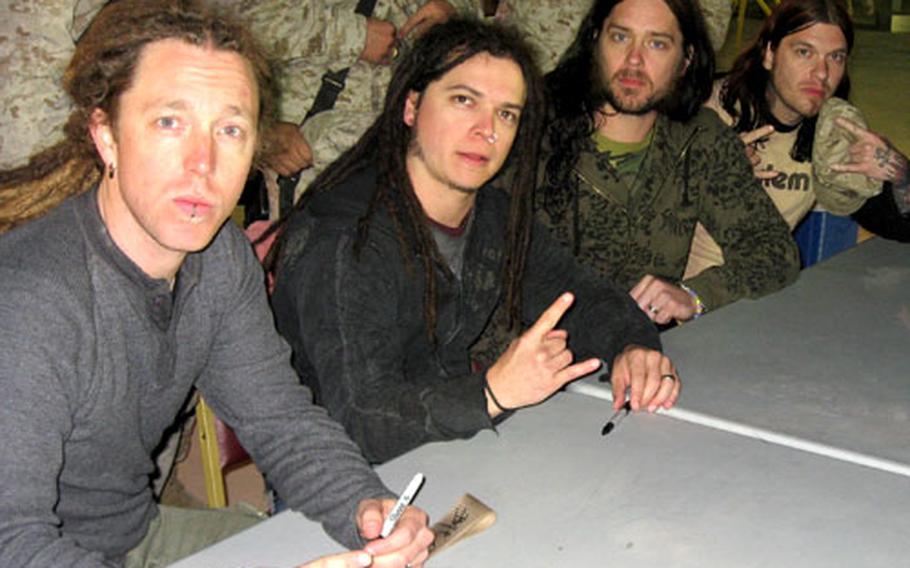 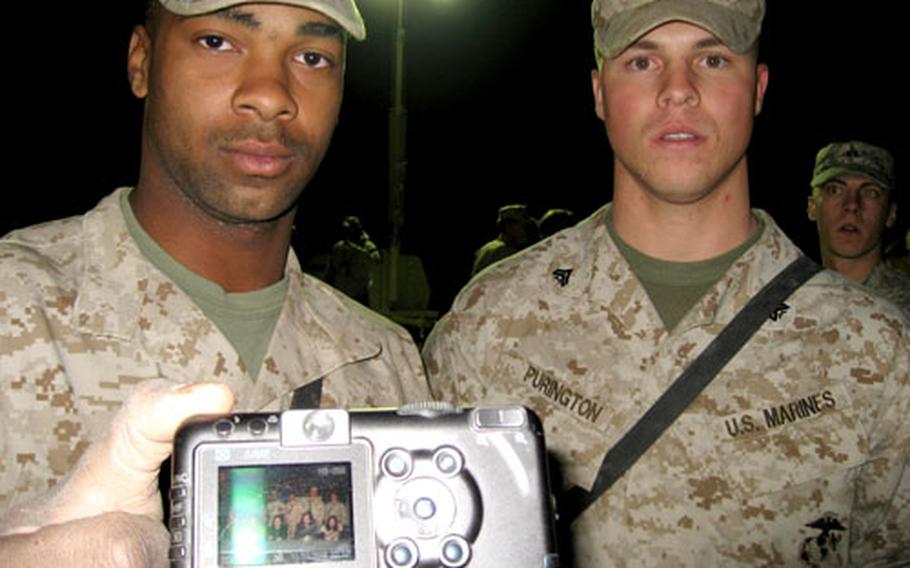 Cpls. LeRoy McGee, left, and Kyle Purington of 9th Engineer Support Battalion show off a photo of them and the band Shinedown after a concert Saturday night at Camp Taqaddum, Iraq. (Charlie Coon / S&S)

&#8220;We don&#8217;t get to play shows in the States with kids jumping up and down with their M-16s. It was a blast,&#8221; said Jasin Todd, guitarist for the band Shinedown, which played Saturday night as part of a United Service Organizations-sponsored tour.

Yes, it was a bit different, especially at the end of the 75-minute show: A mosh pit of about 200 (mostly) Marines, jumping up and down to the deafening sound, rifles pointed skyward. &#8220;Like an Afghanistan wedding,&#8221; said one observer.

There was no booze, no shots were fired; just a few choke holds administered. Tame by U.S. concert standards.

In addition to Todd, the Jacksonville, Fla.-based band had Brent Smith doing the singing, Brad Stewart thumping on bass and Barry Kerch playing drums. The band has been together for six years, with all the same guys.

Camp Taqaddum, or TQ as it&#8217;s known to the U.S. military, was the last of four stops for Shinedown. It previously played in Kuwait before heading to Anbar province for concerts at Al Asad and Camp Fallujah.

&#8220;At Camp Fallujah, they let the kids go crazy in the mosh pit. An officer came up later and thanked us for making them beat the (expletive) out of each other,&#8221; Todd said.

Kerch, the drummer, said the band had contacted the USO about playing for the troops. Todd&#8217;s brother, Lance Todd, is an airman currently serving his third downrange tour, this time in Afghanistan.

Shinedown already had fans at TQ.

Capt. James Uwins heads a six-Marine team whose job is to dispose of the 170,000 gallons of black water generated each day at Camp Taqaddum.

Camp Taqaddum, home of the 1st Marine Logistics Group and other units, is the main logistics hub in western Iraq. So its troops generate a lot of waste, which needs to be managed.

The black water is deposited into three large lagoons, each about 50 yards across. It&#8217;s evaporated as much as possible. Then the remainder is burned off using used oil and contaminated fuel, which doesn&#8217;t smell exactly like lilacs in May.

Black water is just the start of it. Here&#8217;s the partial rundown of the rest of the base waste:

About 130,000 gallons per day of &#8220;gray water,&#8221; from faucets and showers, that gets evaporated.Municipal waste, 130 cubic meters per day of general everyday wastebasket stuff.Hazardous materials, such as the 500 drums of used oil every six months, and about 30,000 gallons of contaminated fuels per year. Plus dead batteries.There is also a 70-acre dump site strewn with junked wiring, tent poles, equipment wrecked in battle and other refuse.The goal for now is to keep all the waste on base, Uwins said.