Reporter's Notebook: Gerty may be battered, but she beats walking 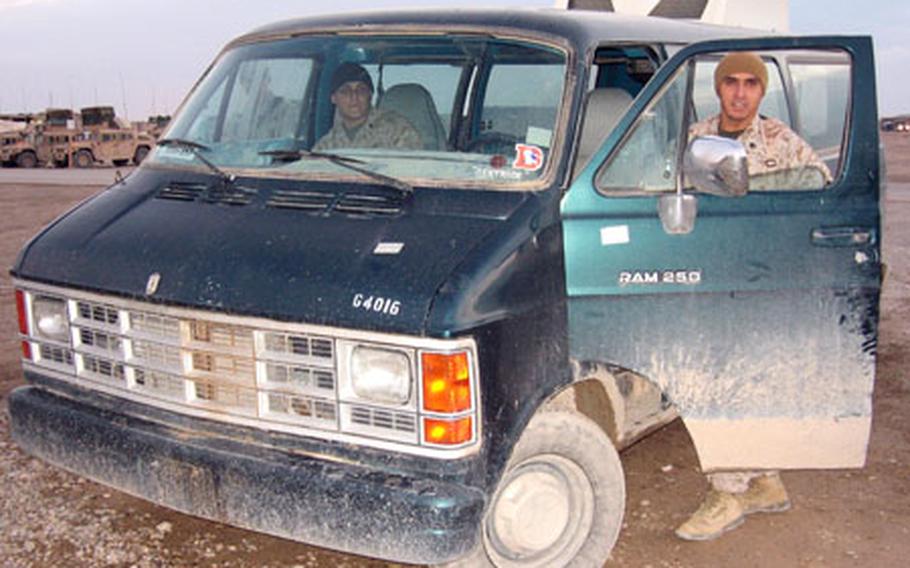 Staff Sgt. Oscar Camarena gets into the driver&#39;s seat of "Gertrude," while Sgt. Remsey Eisha sits in the passenger seat. (Christopher Baldwin / Courtesy US Marine Corps)

Around Engineer Village, the Marines and sailors affectionately call her Gerty.

Her metallic blue paint is a little battered, the front-side passenger door can only be opened from the outside and the heating system blows dust instead of warmth, but folks will tell you she&#8217;s the best wheels on Camp Taqaddum.

Gerty, an eight- or nine- or however-many-need-to-squeeze-in passenger van, was acquired by the first of the 9th Engineer Support Battalion Marines from Okinawa to deploy to Iraq. They put an old-school Denver Broncos sticker on the front windshield and christened her Gertrude.

Her prized keys were bestowed to the second group of Okinawa Marines when they showed up in August.

Uhh &#8230; Chaplain? Finding the roadside bombs and defusing or destroying them is kind of the point of going out there, they told him after a few weeks of unfruitful missions.

Since the change, Company B Marines have more than 40 roadside bomb finds.

Snyder jokingly takes some credit for that, laughing with the Marines after a prayer last week.

But even for those who stay up all hours of the night to watch their favorite team, there&#8217;s still that disconnect of being thousands of miles away from the action &#8212; the defensive-end-forcing-the-quarterback-to-eat-turf kind, at least.

To bring a little of the Denver Broncos to Camp Taqaddum, one fan in Colorado has basically adopted her fellow orange-and-blue diehards.

Carol Drotar, whose son is a Marine serving in Anbar province, keeps them flush in Bronco gear. She sends Marines autographed photos of the players, which she scores at the filming of Broncos safety John Lynch&#8217;s TV show each week; pompoms from the cheerleaders; and other Broncos paraphernalia, such as a blue and orange version of the lid worn by the Cat in the Hat. She even sent a giant banner to be hung in the chow hall.

She originally hooked up with a Broncos-loving Marine through Anysoldier.com. Her e-mail has since been passed along to new Denver fans coming into Camp TQ.