Reporter’s Notebook: From the skies, pilots see progress in Iraq 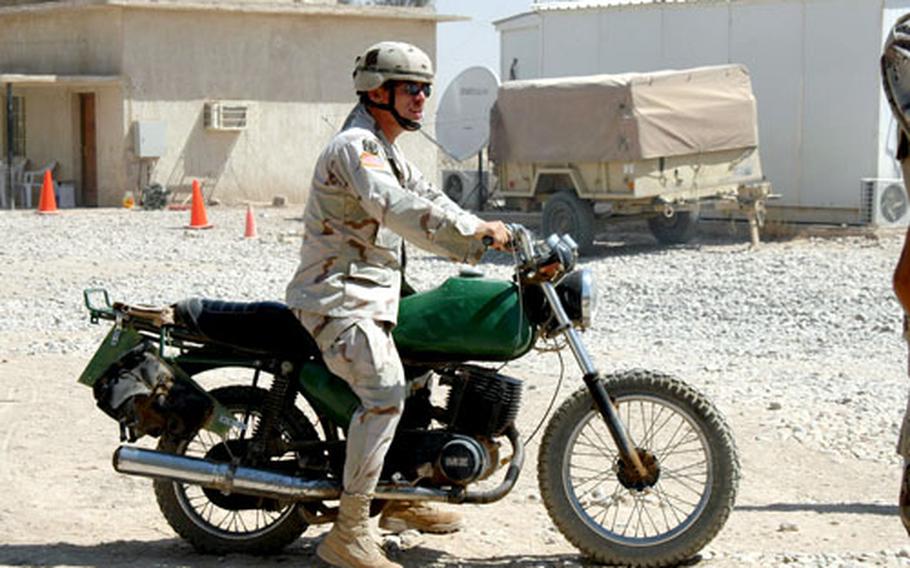 Sgt. John Broderick, 40, of Chicago, rides his German MZ, a motorcycle he picked up a few weeks ago at Camp Normandy. Broderick fixed the bike for its owners there, and they let him have it as payment. Now he rides around FOB Gabe, near Baqubah. (Teri Weaver / S&S)

Sgt. John Broderick, 40, of Chicago, rides his German MZ, a motorcycle he picked up a few weeks ago at Camp Normandy. Broderick fixed the bike for its owners there, and they let him have it as payment. Now he rides around FOB Gabe, near Baqubah. (Teri Weaver / S&S) The officers of the 3rd Brigade Combat Team at Camp Warhorse may have the only Friday happy hour in Iraq with a daiquiri machine. (Teri Weaver / S&S)

Irrigation canals are filling with water, and he&#8217;s seeing more and more green swaths of fruit and vegetable fields. &#8220;The farmers are reclaiming their land,&#8221; he added, with tomatoes, sunflowers, watermelons, figs and oranges among the crops.

Muth has to tell his pilots with the 17th Cavalry, 82nd Airborne Division, to watch out for cell phone towers popping up along roads running south to Baghdad. Houses are being built. More cars clog the highways, and he&#8217;s even seen a train or two in recent weeks.

Slushee happy hoursBAQUBAH, Iraq &#8212; When Maj. Bill Marks&#8217; friends in the States asked him what his unit needed to keep spirits up during its year-long deployment, he didn&#8217;t hesitate.

Welcome to Friday night happy hour at Camp Warhorse with the officers of the 3rd Brigade Combat Team, 3rd Infantry Division. The officers here say theirs is the only weekly &#8220;O-Call&#8221; in Iraq. While that may be hard to prove, theirs may well be the only one with a daiquiri machine.

The slushee machine churns out Hurricane-flavored daiquiris, said Marks, who tends bar during the festivities. Of course, the drinks contain no liquor, but they work well with the nonalcoholic beer, cigars, chicken wings and hot dogs.

The tradition started in February when the unit arrived in Iraq, said Marks, of Columbus, Ga., executive officer for the 203rd Forward Support Battalion.

Keeping the unit stocked in daiquiri mix proves even more challenging than getting the machine through the mail. Sending a box of 12 commercial-sized packets costs about $300, he said, but his friends continue to put them in the mail.

Motorcycle manBAQUBAH, Iraq &#8212; A few months ago, Sgt. John Broderick ran into some contractors who couldn&#8217;t get their motorcycle to run. They had bought the bike from a soldier, who had bought it from an Iraqi. After a year&#8217;s worth of trips around Camp Normandy, it died.

So Broderick, who has a 2004 Honda Shadow at home in Chicago, rebuilt the carburetor, cleaned it and gave it a couple of new spark plugs. After three weeks, he got it running and the workers decided he had earned the bike as payment.

Broderick, 40, moved out to FOB Gabe about a month ago as part of a group providing protection for U.S. advisers to the Iraqi Army. He brought the bike with him and spends his spare time tinkering with it.

Operation Kids for KidsCAMP LIBERTY, Baghdad &#8212; For the last five months, soldiers with the Louisiana National Guard have been coordinating special missions that reach all the way back to their schools, churches and families at home.

Operation Kids for Kids was an idea from two soldiers: Staff Sgt. Shaun Warren, 25, of Kenner, La.; and Sgt. Keith Bonnet, 26, of Metarie, La. Their effort to coordinate a few shipments of clothes and toys has grown into a full-time volunteer mission.

Late last year, the two sergeants began working with their veterans association back home to collect donations and ship them to Baghdad for distribution. The deliveries began in early 2005.

According to soldiers, the group has collected 14,000 pounds of supplies, $10,000 in donations and more than 30,000 hits on its Web site, childrenofbaghdad.com.

To deliver the goods, the soldiers coordinate special missions and solicit volunteers to work during their off-hours to go out into neighborhoods and schools and deliver the packages. When they leave in September, they hope another unit will take over the duties.