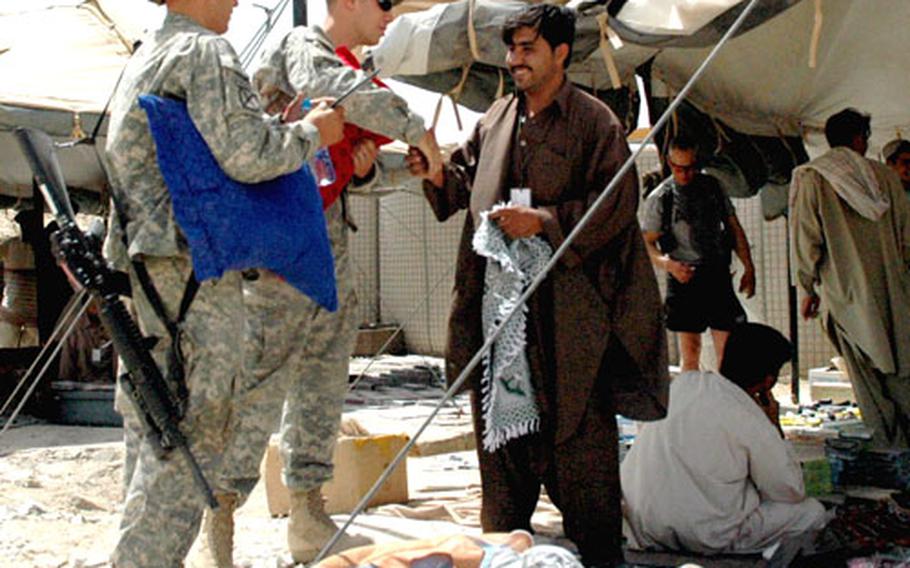 Spc. Jameson Stukes of the 525th Military Intelligence Brigade shakes hands with a local merchant at the FOB Lagman bazaar after negotiating a deal on two pillows for himself and Spc. Mike Shebelski. (Leo Shane III / S&S)

FORWARD OPERATING BASE LAGMAN, Afghanistan &#8212;When the local bazaar opened last week, it was finally a chance for Spcs. Jameson Stukes and Mike Shebelski to get a decent night&#8217;s sleep.

The soldiers from the 525th Military Intelligence Brigade had been looking for pillows for weeks, and managed to barter down one merchant&#8217;s $14 asking price to $10. The men admitted that was still pretty high &#8212; a clean pillow runs about $3 at Kandahar Airfield, and these were pretty dusty &#8212; but after several weeks on the road, they were happy for any comforts.

Last week&#8217;s bazaar was the first at Lagman in more than a month. Base officials said the old marketplace burned down, and a suitable and secure replacement spot couldn&#8217;t be found until recently.

Merchants selling their wares said the bazaar now has fewer vendors and less space, which will cut into their profit margins. An eight-hour day at the previous spot could net several hundred dollars.

Still, they were happy to be back, and embraced familiar troops as they resumed their normal sales routines for everything from local jewelry, hand-woven blankets and rugs to plenty of illegal software and DVDs.

All (isn&#8217;t) clearEvery time members of the base&#8217;s route clearance package team go outside the wire, they expect something nasty to happen.

The unit was attached to Task Force Warrior three months ago to help with security. Their job is straightforward &#8212; when someone reports a problem with a road or convoy route in Zabul province, they head out before anyone else.

Sometimes it&#8217;s as simple as spotting a roadside bomb and calling for explosives teams to come disarm it. Other times it means acting as a decoy and drawing out militants who were waiting for less prepared, more vulnerable targets.

The 22 members of the clearance package are all part of the 37th Engineer Battalion out of Fort Bragg. So far the unit has been lucky: The only serious injury was from a roadside bomb two months ago, which broke one soldier&#8217;s leg but caused no long-term damage. But there have been other close calls, both due to aggressive enemies and dangerous terrain in this mountainous region.

Shiny new toyThe base&#8217;s explosives patrol got a new toy last week, and all the boys want to play with it.

The 744th Explosive Ordinance Disposal Co. got its first Cougar Rapid Response Vehicle this week, a massive vehicle nearly twice the size of a Humvee with windows all around the top for better visibility.

Its armor and setup are designed to withstand heavier blasts than the Humvee, and its seats are pushed several feet higher off the ground to allow the driver and passengers to react quicker to danger.

Other units on base have heavily-armored trucks to supplement their standard Humvee convoys, but this clean new behemoth stuck out even among the other big vehicles.