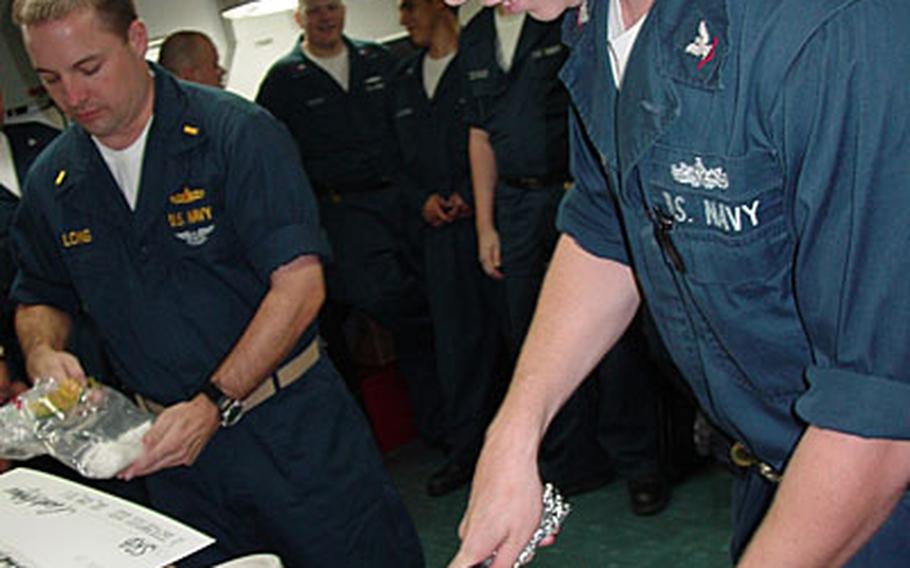 ABOARD THE USS KEARSARGE, Persian Gulf &#8212; The Kearsarge deployed to the Persian Gulf with a floating trauma center.

The fleet surgical team is deployed aboard the amphibious assault ship to give its strike group a cadre of doctors, nurses and hospital corpsmen able to treat casualties from the battlefield or a natural disaster.

When they&#8217;re not preparing for mass casualties, they perform various surgeries on the ship to keep their skills sharp.

So, what are some of the most common? Appendectomies and vasectomies, surgical team members said.

Seeing tripleAn electronics warfare officer aboard the Kearsarge became the proud father of triplets on Sept. 6, days after the ship entered the Persian Gulf.

Ensign Jason Coltellino might have been thousands of miles away at the time of the birth, but he was able to see his newborns for the first time via video teleconference about two weeks later. He choked back tears as he watched his wife hold the newest family members.

His wife gave birth to two girls and a boy: Trinity Lynn, Trista Anne and Jayden, according to the ship. Each weighed 4 pounds and was delivered by Caesarean section at the Stony Brook Medical Hospital in New York.

Capt. James Gregorski, the Kearsarge&#8217;s commanding officer, said mother and children left the hospital last week. They are staying with family in the United States.

The triplets bring the number of children in the Coltellino family to six.Money, money, money

ABOARD THE USS GUNSTON HALL, Persian Gulf &#8212; There is a huge incentive to re-enlist while serving aboard a ship deployed to the Middle East: The bonus money dished out for certain jobs isn&#8217;t taxed.

Servicemembers serving in the Middle East do not pay federal income taxes. It&#8217;s one of the financial benefits of serving in a dangerous area or combat zone.

Navy Petty Officer 3rd Class Joseph Bennett re-enlisted aboard the dock landing ship USS Gunston Hall last week, and will receive a $40,000 bonus for doing so. Some job rates can get as much as $70,000 in bonuses &#8212; the amount depending on whether the Navy needs people in those jobs or not.

Crewmembers gathered in a ship office to witness Bennett&#8217;s ceremony. After he re-enlisted, Bennett, 23, of Valdosta, Ga., cut a cake garnished with real U.S. dollar bills. Not that he needs the extra money, of course.

The beer&#8217;s on Bennett when the ship reaches port.