Reporter's Notebook: Finding a galaxy far, far away ... in Baghdad 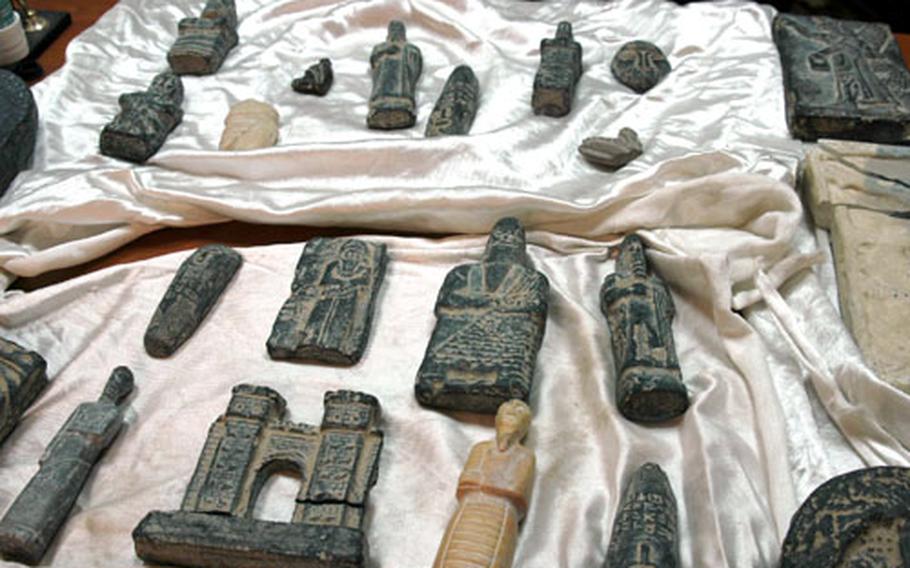 Iraqi soldiers detained an Egyptian man and confiscated 27 artifacts, right, believed to be several thousand years old and looted from an Iraqi museum during the early days of the war, according to Gen. Jaleel Khalaf Shawail, a one-star general in charge of the Iraqi 1st Brigade. (Teri Weaver / S&S)

Iraqi soldiers detained an Egyptian man and confiscated 27 artifacts, right, believed to be several thousand years old and looted from an Iraqi museum during the early days of the war, according to Gen. Jaleel Khalaf Shawail, a one-star general in charge of the Iraqi 1st Brigade. (Teri Weaver / S&S) 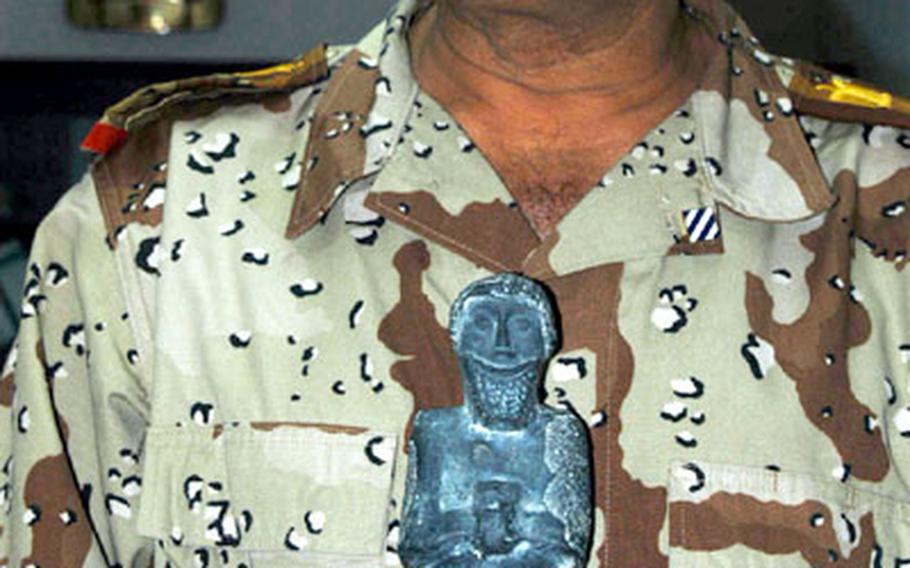 Gen. Jaleel, holding one of the artifacts, said the pieces would be returned to the Iraqi government. (Teri Weaver / S&S)

The Louisiana National Guard members from the 1088th Engineer Battalion were staring at mounds of dirt, askew concrete, and the endless trash that litters Baghdad in the hopes of uncovering a roadside bomb before it injured anyone. They were moving at about 5 mph in the military&#8217;s &#8220;Buffalo,&#8221; a hulking mine-clearing vehicle, that, if it had 100-foot-long legs, could be a cousin to an armored walker the Imperial troops used in the movies.

Lamb got his bootleg &#8220;Star Wars&#8221; movie at a kiosk on base. At Camp Independence, the movies showed up at bazaars a few weeks back, selling for $3 a copy, and the kiosk owner said they were selling fast.

&#8220;Stars Wars&#8221; fans with less time, or without a DVD player, have been gathering three nights a week in Camp Tigerland, home to the 256th Brigade Combat Team, where outdoor screenings were being held.

CAMP TIGERLAND, Iraq &#8212; Another trilogy was completed last week at this U.S. base: first Burger King, then Cinnabon and now, Popeye&#8217;s Chicken.

The fried-chicken-and-biscuit chain from New Orleans opened last Saturday in the midst of a National Guard brigade made up primarily of Louisiana natives. Make that Louisiana natives who&#8217;ve been away from spicy batter, Cajun fries and the fast-food chain&#8217;s version of red beans and rice since deploying last October.

That may explain why nearly 100 people were waiting in a two-hour line one afternoon in 109-degree heat for a two-piece or three-piece dinner.

FORWARD OPERATING BASE JUSTICE, Iraq &#8212; Maj. Gen. Jaleel Khalaf Shawail fondled the pieces of broken tile, putting them together like a puzzle. It took a couple of minutes, but when he finished, a woman drawn in faded blue was revealed.

The tile was one of 27 pieces of artifacts &#8212; believed to be 6,000 years old &#8212; that the Iraqi army confiscated last week from an Egyptian man, according to Jaleel, commander of the 1st Brigade of the Iraqi army.

The artifacts were likely swiped from a museum shortly after the U.S.-led invasion of Iraq two years ago, said Maj. Brad Sonnier, 36, of St. Martinville, La., who works with Jaleel to manage and train soldiers in Jaleel&#8217;s brigade.

Some pieces are covered in an alphabet that Jaleel, a former military history teacher, said are Sumerian. A few look like they were once medallions.

A couple of items in the collection look like they are fakes, Jaleel said. He&#8217;ll turn them over to the Iraqi government for further inspection.

As of Sunday, the suspect was being held in an outdoor cage at another U.S.-Iraqi military camp in Baghdad, Iraqi officers said, awaiting transfer for further questioning.