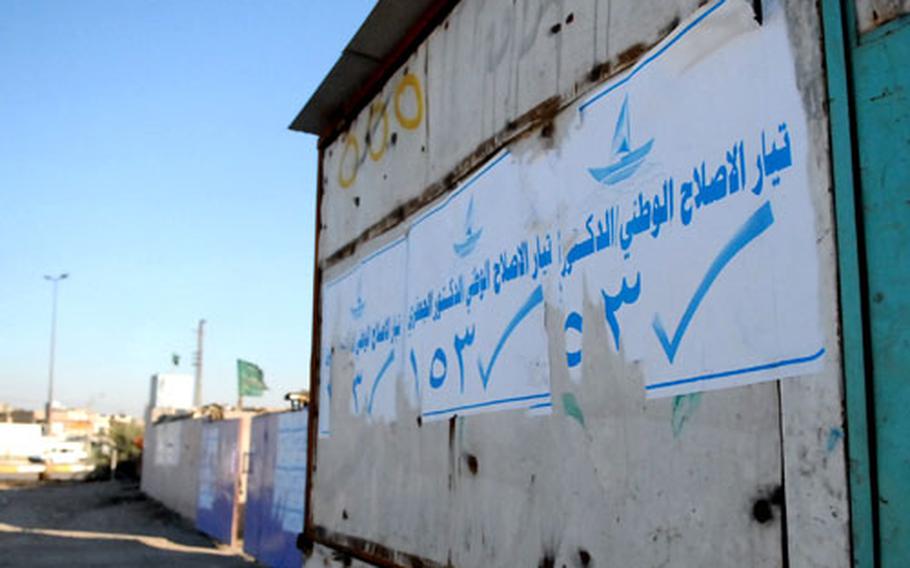 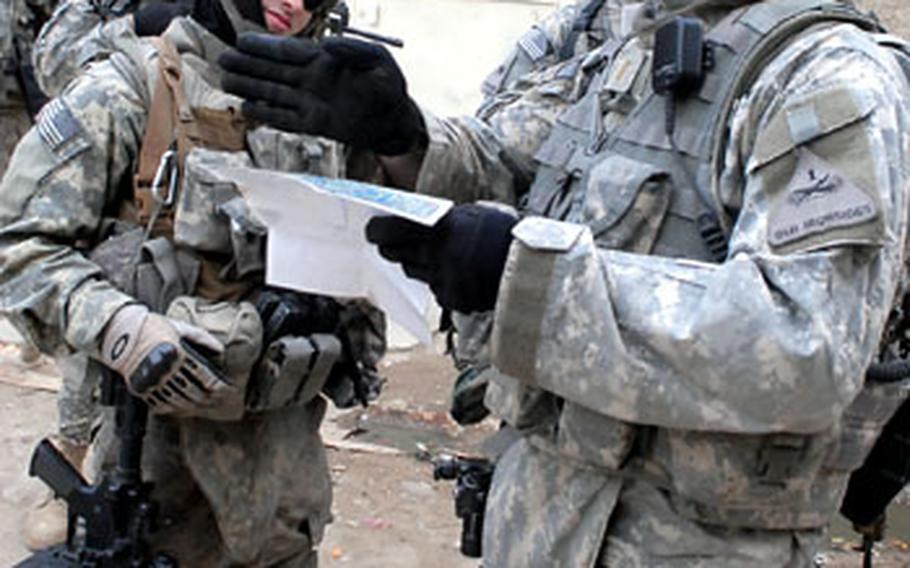 Soldiers with Company C, 1st Battalion, 35th Armor Regiment try to determine which of Sadr City’s many narrow streets they are on while searching for an address Monday. The platoon recently asked its Community Project Workers to map out the streets after learning that many residents didn’t even know the name of the street where they live. (James Warden / S&S)

The political posters that are such a ubiquitous part of American &#8212; and Iraqi &#8212; campaign seasons are few and far between in this district of Baghdad.

Hassan Shama, the chairman of the Sadr City District Council who&#8217;s running for a Governorate Council seat, said that&#8217;s because few campaigners have the money to pay for such posters.

While candidates are campaigning, they are limited by how much money they have.

Only those with financial backers can afford can afford pictures, posters and other advertising, he said.

These are typically candidates supported by the leading Iraqi political parties, although Shama alleged that Iran was backing some candidates.

&#8220;The ones supported by the coalition forces, they are broke like me,&#8221; he said, joking that they could always give him space on one of the balloons that keep watch over the American bases.

In Iraq&#8217;s competitive political environment there&#8217;s another reason posters are rare in the city.

Supporters often tear down opponents&#8217; posters whenever they see them.

The soldiers had a simple task Monday: Find Street 24. They figured they could go to the appropriate sector in Baghdad&#8217;s Sadr City district, ask around and quickly find the right place. Simple, right?

Then a homeowner on a perpendicular street said the street he lives on was 33.

One street over, a man said part of the street was 24, but a storeowner on that section said the street was number 18. A nearby homeowner was more forthcoming.

He&#8217;d been living there five years and admitted he only knew his home number, not the street name.

&#8220;We asked four people what street we were on and we got four different answers,&#8221; said 2nd Lt. Clayton Merkley, a platoon leader in Company C, 1st Battalion, 35th Armor Regiment.

Merkley&#8217;s platoon has asked leaders of local Community Project Workers groups to map the streets in their sectors so that Americans will have an easier time finding addresses when needed.

Street signs are key landmarks that most Americans take for granted. But they aren&#8217;t quite so prevalent in Baghdad &#8212; especially within the warrens of the city&#8217;s poorer districts like Sadr City.

The signs that are available are hidden, incorrect or completely forgotten by residents who see no pressing need to know exactly where they live.

Sheikh Ali Smaesem, a CPW leader, said muktars &#8212; or neighborhood officials &#8212; are the ones responsible for keeping track of the street names.

But he leaned over a map at his weekly meeting Tuesday with Merkley and started ticking off key streets.