Reporter's Notebook: Does that Black Hawk come in blue? Inquire at Bagram 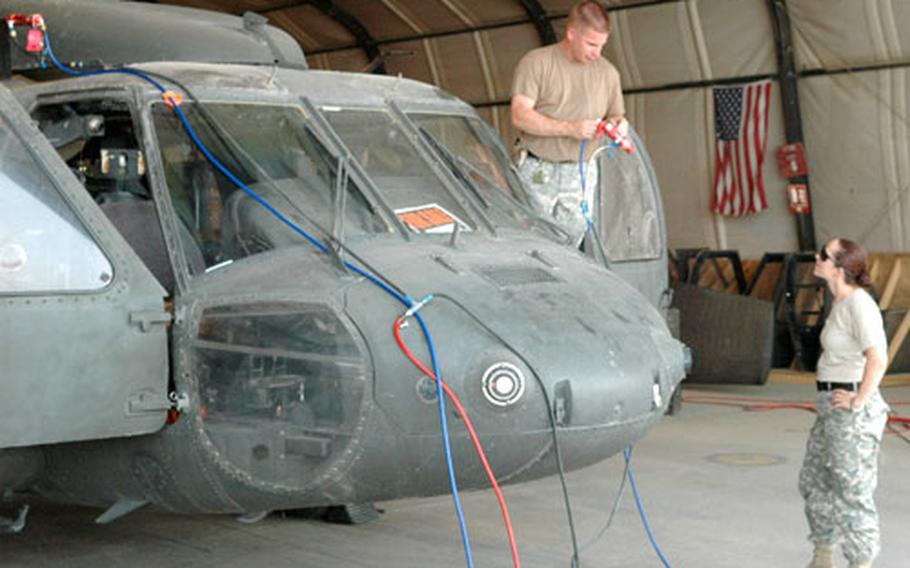 Army Spc. Brad Verzweyvelt and Spc. Stephanie Magnus of the 277th Aviation Support Battalion work on the electrical system of a UH-60 Black Hawk at a repair hangar in Bagram Air Base, Afghanistan, in this undated file photo. Other members of the repair crew posted the “For sale” sign in the window shortly before work began, and joked with passers-by about giving it away for a mere $500. (Leo Shane III/Stars and Stripes)

Members of the Army&#8217;s 277th Aviation Support Battalion attracted a small crowd and a lot of laughs when they posted a &#8220;For Sale&#8221; sign on one of several helicopters in their repair hangar Wednesday.

Several troops waiting for transport out of Bagram posed for pictures beside the vehicle and joked about what other colors might be available and what kind of gas bill the military aircraft would run up.

Army Spc. Brad Verzweyvelt, a South Carolina native, said nothing was seriously wrong with the chopper &#8212; crews had brought it in for a routine electrical check up and to have a close look at a temperamental back rotor. Officials expected the work to be finished by early afternoon.

The crew posted a sale price of $500, but seemed willing to settle for whatever small amount someone would give them for the state-of-the-art flying machine.

But Verzweyvelt thought they should hold out for more.

Not everyone on base felt the slight earthquake, which occurred just before 10 a.m. Those who did were left wondering exactly what had happened.

Spc. Jessica Greenfield, of the Army National Guard&#8217;s Indiana-based 219th Area Support Group, said she was in the camp&#8217;s schoolhouse when the shaking started. She said the experience left her a little befuddled, but unaffected otherwise.

Afghan media reports said the quake caused no major damage in the region.