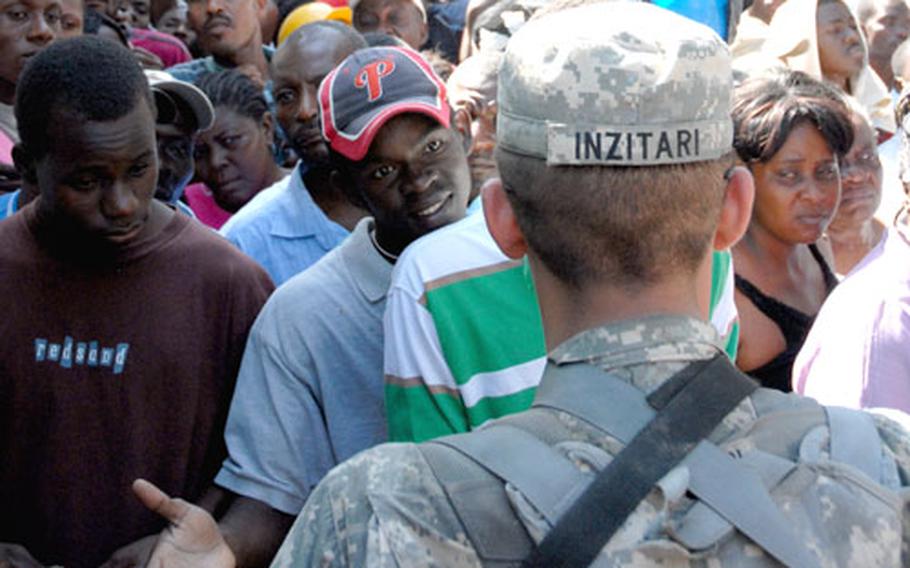 Pfc. Anthony Inzitari stands at the gate Friday talking to Haitians who were trying to get inside the main Port-au-Prince hospital. (Megan McCloskey / Stripes)

Pfc. Anthony Inzitari stands at the gate Friday talking to Haitians who were trying to get inside the main Port-au-Prince hospital. (Megan McCloskey / Stripes) 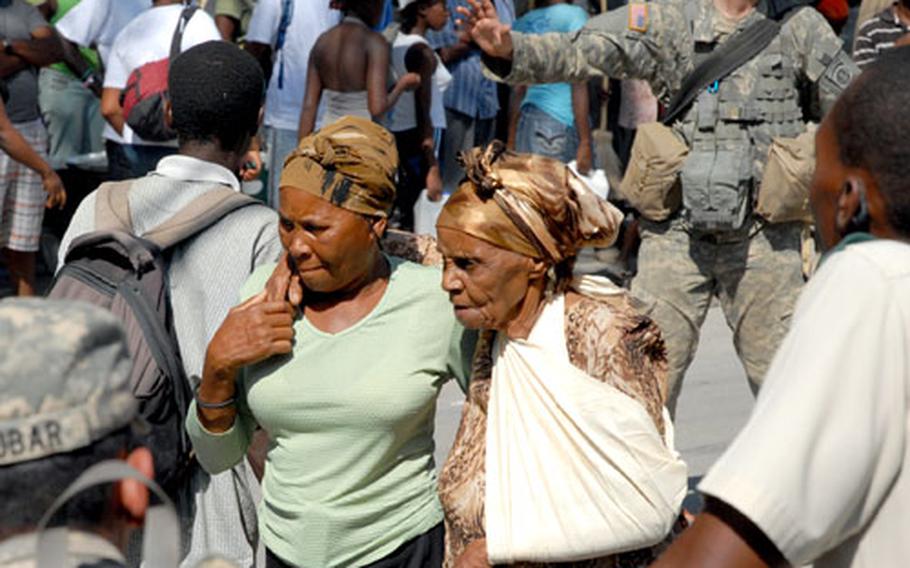 Soldiers try to keep order outside the hospital gate Friday. They have set up a system for access, but the line only lasts a few minutes before the pushing and yelling resumes. (Megan McCloskey / Stripes)

PORT-AU-PRINCE, HAITI &mdash; The concept of forming a line just isn&rsquo;t getting through to those gathered outside the gate of the main hospital in the Haitian capital. Instead, there is a crushing throng of people waving identification cards, pleading with soldiers and trying to sneak inside.

About a dozen soldiers man the gate at a time, setting up every few feet trying to keep the masses at bay.

&ldquo;We&rsquo;re getting to know those at the gate,&rdquo; Pfc. Erick Escobar said, pointing out one man who has been there every day with a different excuse for needing to go inside, none of which the soldiers have believed.

The soldiers of Company C, 1st Battalion, 325th Airborne Infantry Regiment with the 82nd Airborne Division, who are providing security, have found a few translators to help them distinguish between those who have a legitimate need to go inside the hospital and those who are just there to linger or maybe steal some medicine or equipment.

That&rsquo;s been a problem with some of the workers the doctors have been requesting to come help them. Night falls and they turn to thievery.

&ldquo;We&rsquo;re at the point where we can identify the troublemakers,&rdquo; 2nd Lt. Duane Sowa said, noting that the hospital employees pitching in at the gate sometimes don&rsquo;t help matters. &ldquo;They let in every good-looking girl they see.&rdquo;

Doctors are describing the medical procedures here as a form of battlefield medicine &mdash; the kind we saw in the 1800s.

&ldquo;A lot of it is Civil War medicine,&rdquo; said Lt. Col. Robert Malsby, 1st battalion surgeon. &ldquo;The only thing you can do is cut off the limb. If you don&rsquo;t have antibiotics and you know you aren&rsquo;t going to get any soon, you have to take the limb to save the life.&rdquo;

In the first few days after the earthquake this meant cutting off legs and arms, sometimes from four or five patients in one makeshift operating room, without the proper tools or anesthesia.

In recent days those supplies have become more available, though still in short supply. Even with all the aid coming in, keeping up a steady flow of medical supplies has been a challenge.

At one point, the aid workers told Malsby they were three hours away from running out of anesthesia completely.

There is a plethora of aid groups here to provide medical care but very little coordination among them. It makes for a confusing, sometimes stuttering aid effort.

Leave it to a few former servicemembers to take charge, creating an outdoor triage area at the hospital.

&ldquo;The doctors had two overflowing ERs and they came out begging us to set-up an area outside,&rdquo; David Griswell, a doctor and former soldier who was coming alone to Haiti but ended up running into a former Marine at the airport.

To make the triage area, parked cars had to go. And when the drivers couldn&rsquo;t be found, Jake Wood, a former Marine in desert camouflage pants, took out his ax and crashed through a window so the car could be pushed out of the way.

They set up shade for the patients using whatever they could find, a tarp on one side and pieces of cardboard boxes for individual hospital beds. Within an hour or two, they had an orderly triage area up and running.

Mark Hayward, who was a Special Forces medic before going to physician&rsquo;s assistant school and leaving the Army as a captain, helped tend to the patients, many of whom needed to have their broken limbs in traction.

As is the case with so much right now, Hayward and the other aid workers improvised. They are using cinder blocks tied to rope.

As is the case with so much right now, Hayward and the other aid workers improvised. They are using cinderblocks tied to rope.