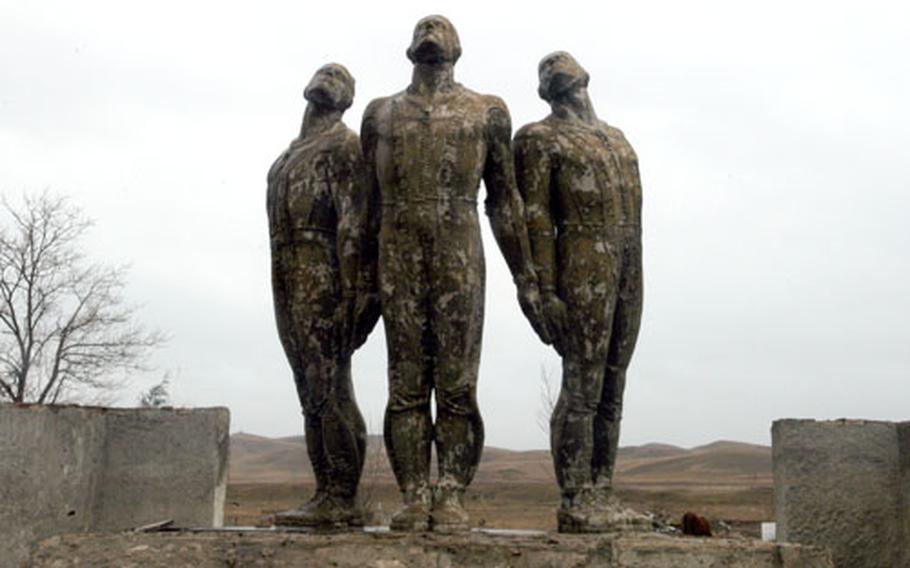 A monument to what appears to be pilots or cosmonauts standing with their backs arched, hands pointed behind them, looking to the skies at Krtsanisi Training Area, Georgia. (Geoff Ziezulewicz / S&S)

A monument to what appears to be pilots or cosmonauts standing with their backs arched, hands pointed behind them, looking to the skies at Krtsanisi Training Area, Georgia. (Geoff Ziezulewicz / S&S) 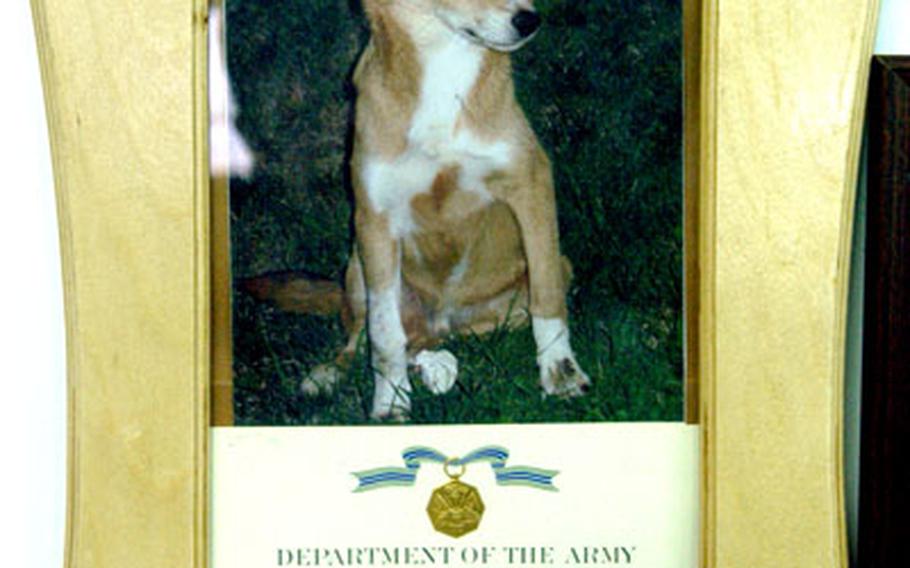 A plaque on the wall at the Krtsanisi Training Area in Georgia recalls Alpha, a dog named after Company A of the first Georgian battalion, which came through the American-led training here last year. (Geoff Ziezulewicz / S&S)

KRTSANISI TRAINING AREA, Georgia &#8212; On the firing range here &#8212; the main military hub for U.S. forces who are in the midst of training a Georgian battalion for deployment to Iraq &#8212; it&#8217;s not always clear where the range ends and the cow pasture begins.

After all, animals want grazeables and cud, and they don&#8217;t know they should avoid the live-fire range. Sometimes animals owned by nearby residents saunter into areas where they just shouldn&#8217;t be.

Many walk up from a ravine behind the range, and aren&#8217;t visible until the last minute.

&#8220;Usually in the morning time, we get cows and sheeps,&#8221; said Sgt. Phillip Pulanco, one of the roughly 65 American military personnel stationed here for the training.

But today, about 15 years after the USSR collapsed, Vaziani is in disrepair. Crumbling hangar bays that once housed the mighty airpower of the Soviet empire are now inhabited by a family or two, their flock of livestock and a few mean-looking canines.

The dogs&#8217; owners basically go about shepherding their flock as MOUT training commences on the base around them, he said.

The decrepit installation also has a square of sorts, flanked by deteriorating Soviet busts of long-past leaders.

The three stone Soviet heroes stand with their backs arched, hands pointed behind them, looking to the skies.

On a recent day a pig dug furiously in the dirt nearby with his snout, and scraggly cattle silently looked on.

We hardly knew yaThe Krtsanisi Training Area is going to the dogs. A bad, overused clich&#233;? Oh yes, but entirely apt in this case. While strays come and go as they please in this main training hub, one pooch got under the skin of American and Georgian soldiers alike.

&#8220;Alpha,&#8221; named after Company A of the first Georgian battalion to come through the American-led training here last year, immediately attracted soldiers with his overall &#8220;good-dog&#8221; nature.

A framed photo of Alpha, also known as Ralphy or Recon, and his application for an Army Achievement Medal hang in the American camp&#8217;s Morale, Welfare and Recreation room.

&#8220;His bravery, inspiring laziness and ability to chew on anything, no matter what material or how hard, contributed greatly to the morale and nature of the soldiers assigned to the joint task force and the GSSOP II mission,&#8221; a plaque for the pooch reads.

As Alpha grew on the camp, soldiers would give him food when possible and try to take care of him.

But the man-dog honeymoon soon ended. Alpha stopped being nice, and he was put to sleep.