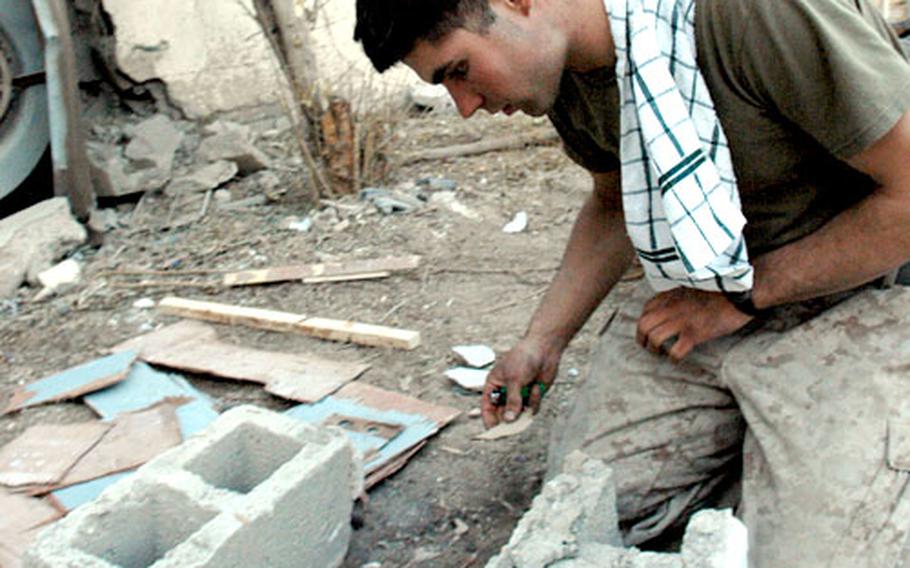 Pvt. Jake Lybrook worked at his Marine base in Husaybah, Iraq, near the Syrian border, while the other American men voted the nation&#39;s 50 most eligible bachelors by Cosmopolitian magazine partied in New York City. (Andrew Tilghman / S&S)

Pvt. Jake Lybrook worked at his Marine base in Husaybah, Iraq, near the Syrian border, while the other American men voted the nation&#39;s 50 most eligible bachelors by Cosmopolitian magazine partied in New York City. (Andrew Tilghman / S&S) There are thousands of young women at home who want to meet Pvt. Jake Lybrook.

&#8220;It was pretty cool, I guess,&#8221; Lybrook said shortly after finishing the seven-day battle pushing through the Syrian border town of Husaybah, Iraq.

One of America&#8217;s most widely read women&#8217;s magazines, Cosmopolitan selected one man from each state for the article, a &#8220;showcase of some of the most eligible studs in the nation.&#8221; Lybrook was chosen to represent North Carolina, where he was stationed at Camp Lejune in Jacksonville, N.C.

Lybrook said his mother and sister entered him in the contest and after he was selected, he went to New York City for a photo shoot and formal interview. The magazine listed critical information like what kind of women he likes and where he takes a woman on a first date.

&#8220;It was all this girly stuff,&#8221; he said, appearing somewhat embarrassed about discussing the matter in front of other Marines.

Lybrook missed out on a Cosmo party in New York last month that brought the magazine&#8217;s selected bachelors together with talent agents and television producers. Several others chosen appeared on TV shows, including &#8220;The Regis and Kelly Show&#8221; and &#8220;The Today Show&#8221; on NBC.

The magazine piece included an e-mail address, and Lybrook said he has received hundreds of messages from women in the States, as well as some in Europe and South America.

New toy, bad habitThe children of western Iraqi border towns have a new toy since the Marines rolled through earlier this month &#8212; the MRE bomb.

Local children here like to take the chemical heaters found in the Marines&#8217; Meals Ready to Eat and seal them off in water bottles until pressure builds up.

Learning the languageCpl. Christopher Thomas, a 19-year-old from eastern Pennsylvania, has become a self-appointed cultural ambassador in western Iraq.

Thomas, trained as a machine gunner, was sent to a brief Arabic language school before his deployment and has been making a daily effort to learn the language with the help of the Iraqi Army units working with the Marines.

Thomas often carries a tattered notebook filed with handwritten vocabulary words and phrases that he uses in conversation and constantly updates.

Thomas said many of his fellow Marines have little contact with Iraqis and find his interest in local culture odd.