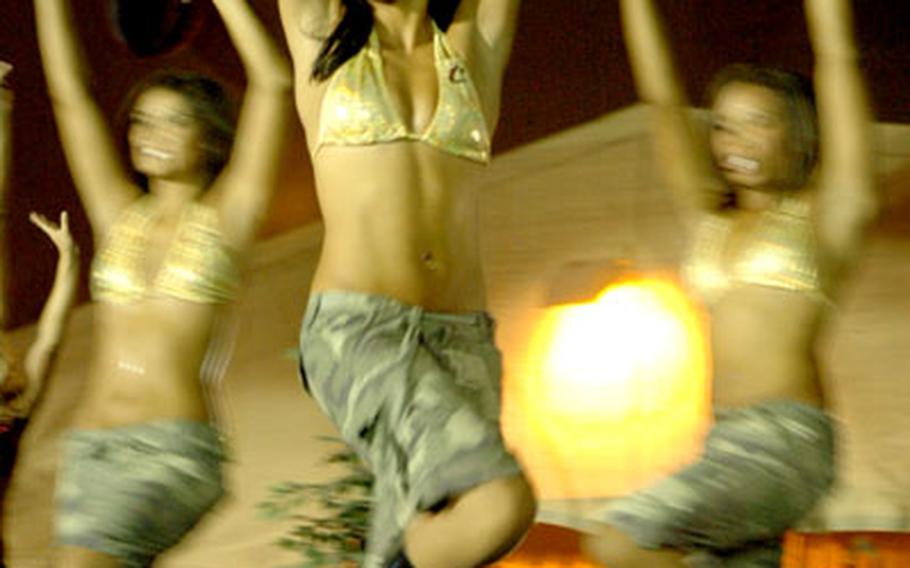 CAMP TAJI, Iraq, A pack of unusual-looking creatures descended upon Camp Taji on Thursday night, to the delight of its denizens.

The Cleveland Cavalier Girls, the dance squad for the professional basketball team, made a stop at the camp north of Baghdad as part of their 13-day tour of bases in Iraq and Kuwait.

Tour manager Jody Pucello said the squad jumped at the chance to perform for deployed soldiers, even though they were not paid extra for it.

While the women seemed to conform to the soldiers&#8217; expectations, the dancers said their image of Iraq didn&#8217;t turn out quite as they anticipated.

Pride on the insideWhen the newly designed Army Combat Uniforms rolled off the line, many officers lamented the loss of the branch insignia, traditionally represented by a patch on the left lapel.

But Capt. Casey Conners, a combat engineer who commands Company E of the 1st Battalion, 66th Armor Regiment, 4th Infantry Division, couldn&#8217;t bear to part with his castle-shaped patch, the mark of the engineer.

So Conners hit upon an innovative way to show his branch pride: he bought one of the lapel-sized patches and had a tailor sew Velcro to the back. Then he slapped it to the underside of his new uniform&#8217;s mandarin collar, on the left side.

He&#8217;s also decorated the vehicle with a horseshoe, and a toy eagle.

And what about the fake mallard?