Reporter's Notebook: Breaking barriers a way to fight back 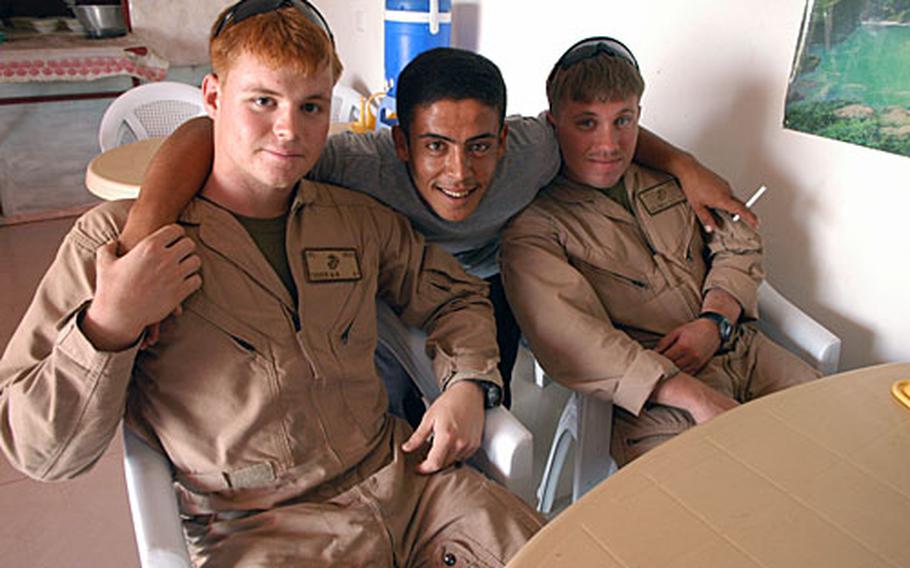 Col. Marshall Terrin, 20, of Las Vegas and Cpl. Benjamin Horlander, 26, of Tyler, Texas, hang with one of the workers at a Hamdiyah restaurant popular with U.S. servicemembers based in Camp Blue Diamond. (By Allison Batdorff / S&S)

Col. Marshall Terrin, 20, of Las Vegas and Cpl. Benjamin Horlander, 26, of Tyler, Texas, hang with one of the workers at a Hamdiyah restaurant popular with U.S. servicemembers based in Camp Blue Diamond. (By Allison Batdorff / S&S) 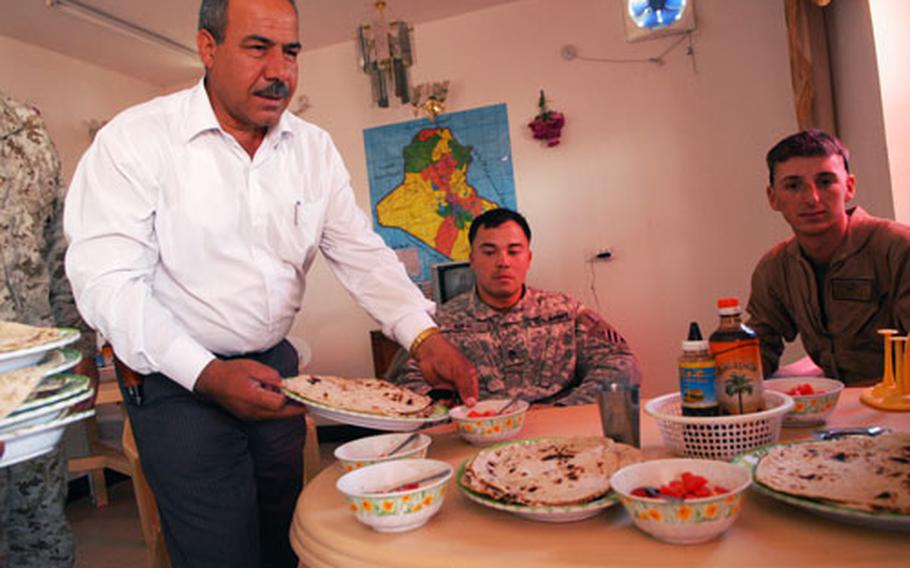 RAMADI, Iraq &#8212; Soldiers and Marines in Ramadi will soon be carrying an index card-sized passage from the Quran in their pockets.

It reads in English and Arabic: &#8220;Say O&#8217; Muslims, we believe in Allah and that which is revealed unto us and that which was revealed to Abraham, and Ishmael, and Isaac, and Jacob and the tribes, and that which Moses and Jesus received and that which the prophets received from the Lord. We make no distinction between any of them and unto him we have surrendered.&#8221; (Surah 2: 136).

This verse speaks of religious tolerance and understanding, which can be in short supply among both Americans and Iraqis, said Col. John Charlton.

The head of U.S. forces in Ramadi hopes distributing the verses will help &#8220;break down barriers between the Americans and Iraqis.&#8221;

Reaching out to the Muslim community is another front in a counterinsurgency, he said, and the old ways of shying away from religious leaders and &#8220;assuming they hate us&#8221; will no longer work, he said. Al-Qaida in Iraq used the mosques to spread messages and hide out, he said.

Now the brigade is either finished or in the process of renovating 19 of the area&#8217;s 44 mosques. It has spent more than $1 million on the effort.

Charlton says he also meets with the senior imams weekly.

They are also doing their share to educate soldiers about Ramadan and working with Iraqi security forces to provide extra security during the Muslim holy month, he said.

Coalition forces and Iraqi police in the area have detained 200 suspected insurgents since the holiday observance began Sept. 13, Charlton said.

Almost. The parking lot is full of Humvees, and food sometimes is slung into ashtrays due to the Iraqi cavalier serving style. But it&#8217;s the simple things the soldiers appreciate, like being able to pull off their body armor, sit down, order and eat.

This is as close to &#8220;normal&#8221; restaurant dining as it gets around here, said the civil affairs team connected to 3rd Brigade, 69 Armor Regiment based in Camp Blue Diamond. Given the history of fighting in the Ramadi area &#8212; it used to be one of the most violent regions in the country &#8212; having a worry-free restaurant experience was an undreamed-of luxury a few months ago, they said.

Owner Ali Jassam opened the restaurant three months ago. The change in security is hard for him to believe as well, he said.

Jassam&#8217;s restaurant is an oasis of delicious kebab, pitas, cucumbers and tomatoes. The fare is heavy, greasy and plentiful and about $4 buys you all you can eat. He calls his restaurant the Arabic word for &#8220;clear,&#8221; but all the soldiers call it &#8220;Griffin&#8217;s&#8221; after the soldier who discovered the place and has his picture on the wall.

Iraqis also come to Griffin&#8217;s &#8212; though Jassam has seen an 85 percent drop in business during Ramadan because of the fasting, he said. Still, he says, he&#8217;ll still stay open for his American friends.