Reporter's Notebook: Army tents make a turn for the better 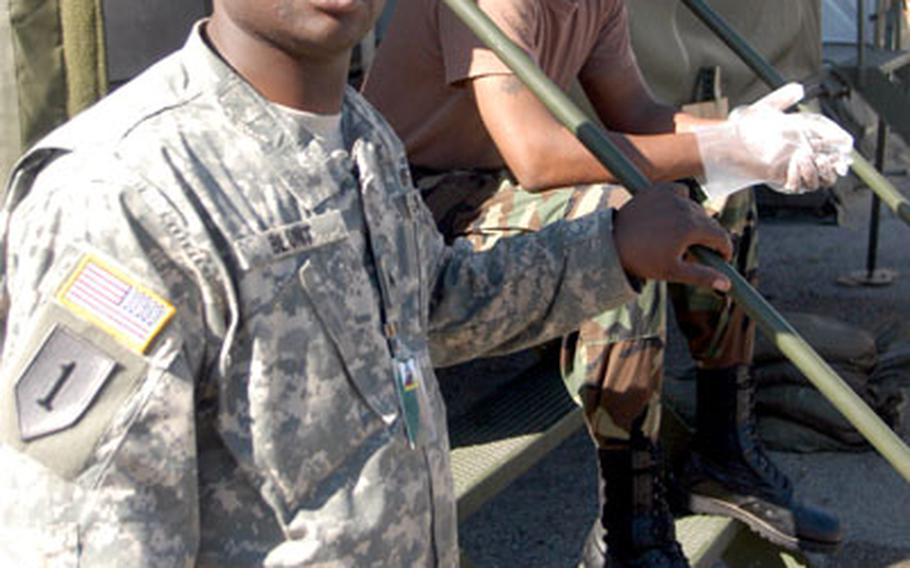 The tents being used at this month&#8217;s Immediate Response exercise came in 20-foot containers that can be transported by plane, train, truck or rail. The sides of the container unfold, and the tent stretches out like an accordion and is fastened into place.

With the old favorites, the general-purpose tents, soldiers had to lay out the tent, center beam and cross beams, drape the canvas and then scramble to hoist the tent and fasten it down. The container-tents, distributed by ShipSup Ltd. of Turkey, come with walls, windows and flooring and are pre-wired. Just hook them up to a generator and they&#8217;re good to go.

They work well at an exercise, according to Staff Sgt. Geoffrey Williams of 7th Army Joint Multinational Training Center, Grafenw&#246;hr, Germany. &#8220;A maneuver unit, though, wouldn&#8217;t necessarily be able to take it with them,&#8221; Williams said.

A few bumps and bruisesThe medics and doctors have treated soldiers for sprains and strains, rashes and gashes. One soldier banged his nose on his weapon. A few others got burned by flying brass.

A civilian was taken to a local hospital to treat a possible heart condition, and an Army Ranger, who had crunched too many discs from jumping out of airplanes earlier in his career, came in for some ibuprofen for his back.

In other words, soldiers at the aid station, assigned to Company E, 123rd Main Support Battalion, have had it easy.

From July 11 through Thursday, the medics had treated about 40 patients. Spc. Michael Addison, a medic, said that with soldiers flying around in helicopters and firing live rounds, it could be worse.

The soldiers are serving about 600 eaters for every breakfast and dinner. A special barbecue is planned for Sunday, featuring steaks on the grill.

But soldiers such as Spc. Bobby Webb and Cpl. Kenneth Blunt are getting help from some friends &#8212; local Bulgarians who are taking care of the mopping, dishwashing and scrubbing.