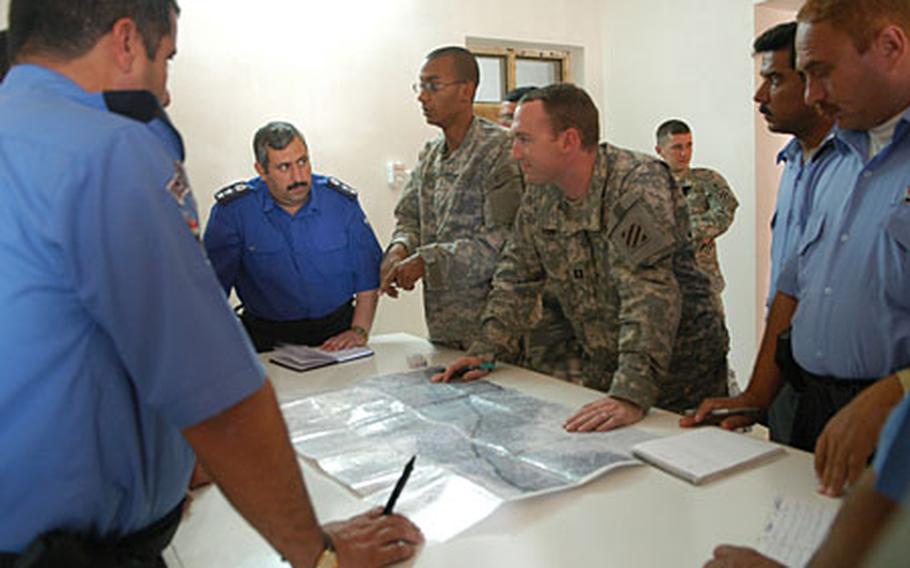 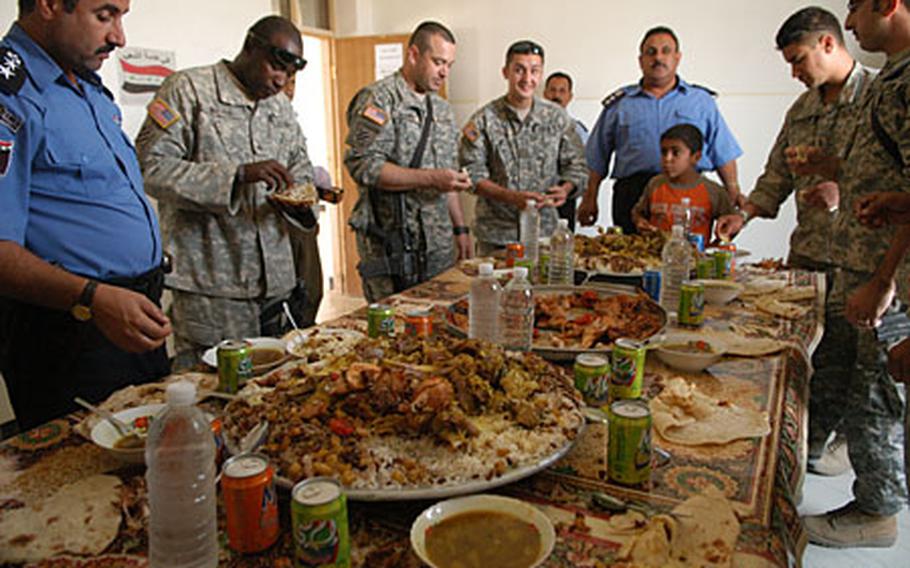 Some members of the 1st Brigade Combat Team&#39;s 3rd Battalion, 69th Armor Regiment have picked up some Iraqi mannerisms that won’t fly at home, they said, such as eating with their hands or smoking. This group had a business lunch Wednesday with Iraqi police in Anbar province. (Allison Batdorff / S&S) Along with scattered Arabic phrases, U.S. servicemembers in Anbar province are picking up habits from the Iraqi community when they work together.

And sometimes, such as during a business lunch last week between leaders of the 1st Brigade Combat Team&#8217;s 3rd Battalion, 69th Armor Regiment and Iraqi police chiefs, work and play occur simultaneously.

Even though the topic of the meeting with the police chiefs from four western regions of the province was serious &#8212; security during the religious holiday of Ramadan &#8212; everyone sat in overstuffed chairs, smoking and sipping tea, in a relaxed way one would never find in an American boardroom.

There are certain things he has learned not to do when meeting with Iraqis, such as not crossing his leg at the knee.

But McKinney said he is still struggling with Iraqi names.

&#8220;Every American looks ridiculous when they eat their first Iraqi meal,&#8221; he said, explaining the self-consciousness of not knowing when to eat with your hands or spoon in the Iraqi communal style.

Still, many like Capt. Chris Haun, 28, of Dallas, have developed a fondness for Iraqi cuisine.

Leave it in IraqNot everything the troops pick up in Iraq will be going home with them. First Lt. Evan Davies, a member of the 3rd Battalion, based in Fort Stewart, Ga., will leave his mustache in Iraq. The added facial hair doesn&#8217;t fly with the folks back home, he said.

Davies also snuffs out his smoking habit when he&#8217;s stateside.

So does McKinney, who said he hopes his wife wouldn&#8217;t see this article.

&#8216;Congealing agent&#8217;Members of the 3rd Battalion are a &#8220;congealing agent&#8221; that tries to thicken relationships between Iraqi policemen, according to Haun. The police chiefs battalion leaders met with last week represented five tribes and the meeting was the first of its kind between them in the province&#8217;s western region.

Maj. Jason Garkey, 36, of Eureka, Ill., said platoons are assigned to work with the police stations one-on-one in addition to the group meetings.

The four chiefs &#8212; from Jazeera, Salam, Wallah and al Samoud &#8212; supported coming together for several reasons.

For example, uniting takes a psychological toll on enemies who try to divide them, said Lt. Col. Ali Hindi Shandookh. And meetings show &#8220;mutual respect&#8221; among all officials and give them a venue to exchange information, added Col. Hamid Karim Zabin.