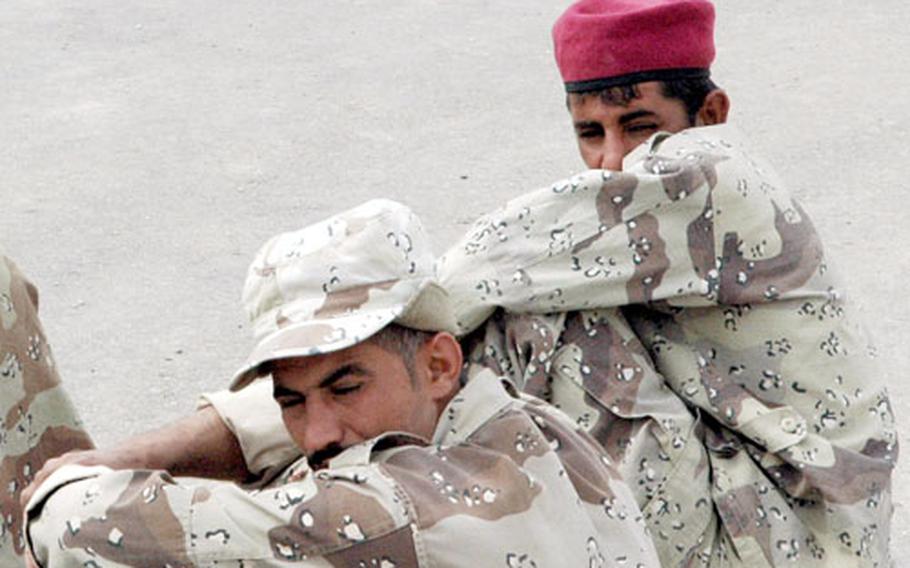 Red berets are popular items with Iraqi army soldiers, but they just don’t wear them the way U.S. and British military members do. Instead of donning them at a rakish angle, many of the soldiers — like the one on the right — wear the berets puffed up like the hat of the Pillsbury Doughboy. (Monte Morin / S&S)

When the 1st Armored Division returned to Iraq this year, soldiers who served with &#8220;Old Ironsides&#8221; during the first 15 months of the war found themselves in a very different conflict from the one they left two years earlier.

Gone were the brazen Mahdi Army gunmen who flooded the streets of Baghdad, Najaf and Karbala with blazing AK-47s and hissing rocket-propelled grenades.

Instead, 1st AD soldiers now find themselves squaring off against hidden roadside bombs with remote triggers and enemy combatants who rarely reveal themselves.

So it was with no small amount of nostalgia that a group of soldiers from the 1st, or &#8220;Bandit,&#8221; Battalion of the 37th Armored Regiment, 1st Brigade, 1st AD recently reminisced about the more conventional war they experienced during their first deployment.

Another soldier chuckled at how little training they had received when it came to conducting traffic control points or house searches in the war&#8217;s early days.

Another soldier recalled with a little awe the persistence of Mahdi Army fighters who attempted to sneak up on their positions at night.

Euphemisms along the EuphratesA young turret gunner with the 549th Military Police Company in Mosul found himself at a loss for words &#8212; or numbers, to be exact &#8212; when he recently observed a crowd of Iraqis descending on a city police station his squad was visiting.

The crowd had captured and bound a local &#8220;Ali Baba,&#8221; or criminal, and was marching the miscreant to the gates of the local lockup. However, when the crowd of dozens arrived at the station, it wasn&#8217;t clear exactly what they were looking to do, and the soldier got a little alarmed.

Bottoms upPlenty of U.S. soldiers and civilians in Iraq realize that some coalition armies are exempt from the General Order No. 1 ban against the consumption of alcohol, but a Stars and Stripes reporter was more than a little surprised recently when a British army soldier asked him if he&#8217;d care for a &#8220;brew&#8221; during an early-morning visit to Camp Mittica, on the outskirts of Nasiriyah.

Among other things, the camp is famous for the wine and liquor available at the Italian military&#8217;s post exchange, and the reporter wondered whether the consumption of beer was a morning ritual.

Raspberry beretWhen it comes to military uniforms, few Iraqi army soldiers seem to feel their kit is complete without a maroon paratrooper&#8217;s beret.

Never mind the fact that the Iraqi army has no airborne training school, or that the only soldiers who actually earned their jump wings served in Saddam&#8217;s army during the Iran-Iraq war. Iraqi soldiers snap them up easily enough at bazaars throughout the country.

The fashion trend has caused more than a few coalition military advisers to roll their eyes. It wasn&#8217;t so much that the Iraqi soldiers were taking credit where it wasn&#8217;t due, it&#8217;s that they had no idea how to actually wear the head coverings.

Instead of pulling the caps down over their foreheads at a rakish angle, as British and U.S. troops in garrison do, the Iraqis often wore the berets like inflated balloons or the chef&#8217;s hat of the Pillsbury Doughboy.